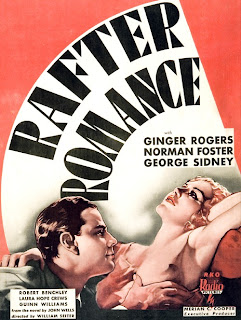 Do not let this semi-1930s- pornographic film poster fool you. Rafter Romance is not THAT romantic. It is a Pre-code film with plenty of the genre’s fabulousness but it was not that racy and romantic. I chose this over the “cleaner” one because I had it saved and liked it better for some reason. Anyway… Rafter Romance is a really cute film even if it is predictable.
Mary Carroll (Ginger Rogers) and Jack Bacon (Norman Foster) have fallen on hard times. The landlord of their apartment Mr. Eckbaum likes Mary and Jack he does not want to kick them out but he needs money. He comes up with the idea that Mary and Jack will share the attic apartment and they will never have to see each other since Jack works at night and Mary works during the day. So he tells Jack who has a large attic apartment that he is going to be sharing the apartment to split the rent. Jack is not happy but he has no other choice. Eckbaum next tells Mary that she has to move out of her apartment and into the attic where she will be sharing with someone and splitting the rent. Again he does not say who she is sharing the apartment with. Mary gets a new job selling refrigerators but by the time she tells Eckbaum she can pay the rent again he has already let the room to someone else. All her belongings have been moved upstairs.

Jack and Mary eventually figure it out that they are sharing a room with the opposite sex and are all the more unhappy with their arrangement. Mary overhears Jack say to Eckbaum that Mary is probably an old cranky maid and other things. They leave notes to each other about certain issues in the apartment and do some damage to the other’s belongings.

One day after work Mary sits outside a deli and waits until she can go to the apartment. She recites the speeches she has to give over the phone to customers. Jack is in the deli and sees Mary outside and introduces himself as a man named Warburton. Neither knows who the other is so there is no harm in them speaking to each other. Jack pretends to me a man named Warburton because it was a name Mary had been using in her speech. He makes like he thinks she was speaking to him. Jack says that he has an aunt who is buying real-estate for a few houses and would like some refrigerators for the housing complex she plans to build. Mary gets all excited thinking she can make some nice money off the commission. They agree to meet the next day to make some arrangements.

Before Mary can walk out of her office her boss is hitting on her and asks her out for dinner. She says something about a banquet out loud which grabs the attention of the other girls in the room and she sneaks out. It is pouring rain outside. Mary comes home to take a shower and change. When she goes to take a show the bucket hanging over the pipe falls on her head. To get back at Jack she hangs his suit up in the shower. When Jack goes to take a shower his suit jacket gets all wet. From this small fiasco Mary and “Warburton” never have their meeting. The next day they run into each other. Mary is mad at Jack but all is forgiven when he is nice to her and takes her out to dinner and buys her flowers.
Jack kind of invites himself to Mary’s company’s picnic the following day. They have a great time together going rowing on the lake. Her boss is none too pleased that he cannot find Mary anywhere especially because they had gone out one night together during the week (nothing happened Mary was totally uncomfortable with him). The whole company leaves without Mary and Jack when they realize what time it is. Jack sprains his ankle while they were running across a stream. He calls a cab to bring them back to his apartment. Mary is the one who notices they live in the same apartment building and that they share the same room. All hell breaks loose when Eckbaum comes upstairs seeing them together, then Jack’s art patron Elsie comes to the room and says nothing but nasty things about Mary (the two women met the day before when Elsie was passed out on Mary’s bed), and Mary’s boss. Then a small argument and fight break out. Jack runs down to Mary and says he loves her and she loves him.

Yeah totally completely predictable but the film was cute.
Ginger Rogers was not Pre-code snarky and feisty like she was in 42nd Street or Gold Diggers of 1933 but she did have a little attitude going on. I could not get over how unbelievably adorable she was in this film. Oh good she was so freaking cute!! Rogers looked amazing I loved all her outfits and especially her makeup. Whoever did the makeup did a great job with the eye makeup because it made her eyes look a longer sideways and the darkness of the eyelashes with the eyeliner brought out her round cheeks. Rogers’ character was almost like a little girl whenever she would get upset she would run and cry to landlord and his wife. Norman Foster was alright. I have never seen him in a film before. Laura Hope Crewes played Elise. She plays Aunt Pittypat in Gone with the Wind. The woman had a knack for playing the most annoying women ever and being too good at it. You just want to kick her in the face when she says some things to Ginger at the end. 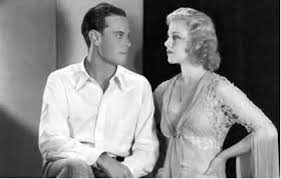 The Pre-code factor is that there is a man and a woman who are not married living in the same apartment. They touch each other clothes, especially Jack touching Mary’s, which most likely became a really big no no once the Code came along. There is a scene where Ginger Rogers undresses to get in the shower and you see her underwear fall off and she kicks it away.
Rafter Romance as I mentioned is a completely predictable 1930s film but it is really cute and very well acted. I liked the story I thought it interesting with the concept of these two people sharing an apartment and them never seeing each other. Rafter Romance is currently available on youtube and I highly suggest getting over there to see it. 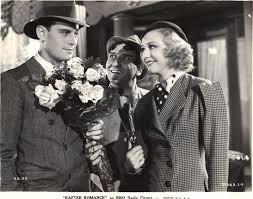 Posted by UneCinephile at 1:30 PM