The Squall sounds like an alright film on paper: a gypsy woman comes to live in this wealthy family’s home and she tears the family apart because the men fall dangerously in love with her. It sounds like a melodrama and it is but to me it sounded like it had potential. The only thing the film really has going for it is excellent sound quality for an early talking film and also that Myrna Loy by this time in career and at age twenty-four was already a good actress for what she was given.
The story takes place on a country farm in Hungry. The farm is owned by a man named Josef with his wife Maria and son Paul. They have a dinner gathering for some close family and friends. Paul has been seeing a young girl named Irma (Loretta Young). He wants to marry her and he asks his parents and her grandfather that night. His father is reluctant at first because Paul is going to school and needs to focus on his studies but they reassure him that they will not get married until Paul is finished with school. 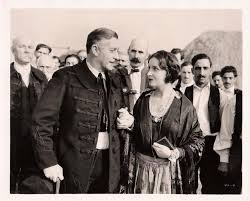 A bad storm- a squall- kicks in. Irma thinks she hears someone scream, when she voices her concern everyone thinks she is just hearing things until they too hear the scream. Their servant Peter opens the door and in comes flying a gypsy woman who is part of the traveling gypsy caravan. The woman Nubi (Loy) is running away from her master El Morro who she says is trying to beat her and begs to let her stay because she is frightened. The men want to turn her away since she is a gypsy but Maria is too kind and will not especially with a horrible man after her. They hide Nubi in the cellar when El Morro comes into the house. When Nubi comes out from the cellar she thanks Maria saying she will repay her by becoming her slave. Maria takes Nubi on as a new servant. Nubi then goes on to make a crazy speech to herself but letting the others hear how she does not want to go back with the gypsies. Paul and Peter listen to her with a feverish look in their eyes.
A title card lets the viewers know that Nubi’s presence is beginning to have an effect on the men of the house. While working outside one day Paul is being followed by the housemaid Lena who he had planned on marrying. They see Nubi sitting under the trees not doing anything, again as Lena points out. When Lena goes away Peter begins to sing a song about how unhappy he is because he knows he should marry Lena but he also wants Nubi. Peter and Nubi chase each other around the garden. He asks her if she has ever loved anyone else before him and she says no.
All the men on the farm go after Nubi including Paul. He spends some time with her and completely begins to ignore Irma. Peter is furious that Nubi has been spending time with Paul. He basically attacks her. At that moment Josef walks in seeing Nubi struggling to get away from Peter. Josef kicks Peter out of the house for his actions. Nubi then sets her claws on Josef. Maria asks Josef some time later how much of what happened was actually Peter’s fault and how much was Nubi’s since before her Peter never laid eyes on any other woman but Lena.
Paul comes home one day saying that he has failed at school. Nubi is the reason he cannot think of anyone or anything else but her. Paul is not the only to fall victim to the gypsy woman. Eventually Josef is out meeting her in the orchards. Irma comes by the house and comments on how everything has changed since Nubi came to live in the house there is no light or laughter anymore. Paul tells Irma he does not want to marry her anymore until he can get things for himself which will not be for a long time. 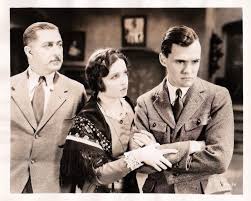 Eventually the family has Nubi taken off their hands when the gypsy caravan comes through town. El Morro comes to the house and no one is going to save Nubi now. He tells them all that Nubi is his wife and they have a child and that she loves no one.
So sounds like your typical melodrama and it totally is. I liked the story mostly because Myrna Loy gave these fabulous seductive looks that let you know what was going on in the character’s mind and that you were supposed to know she was absolutely no good. The unfortunate thing about this film is the acting. The acting is terrible. Even Loretta Young was bad she sounded like she was just repeating her lines how she remembered them. But I will forgive her I am sure this was one of her first speaking roles and she was only sixteen. Some of the acting especially by the actress who played Maria was so over the top and just wicked.
Myrna Loy in her autobiography writes that Nubi was her ultimate vamp role. She humorously writes: “‘ Nubi, she be geepsy, she do dis, she do dat, she do dee other ting.’ She was a real heller, that one.” You can clearly see that this was her ultimate vamp role since she was getting all the men into trouble!       It is strange watching Loy in this film because she puts on this accent and has a bit of a high voice. Her hair is wild as if she has been in the woods for most of her life. Her crystal blue eyes come up so light they are mysterious and add to vampiness. I had yet to see Loy in her early vamp roles and this was my first one. I can absolutely see why Warners and MGM casted her in those roles for so long she had the look she had that mysteriously lovely face. This is not Myrna Loy the actress from The Thin Man but you can tell that by this time she had her acting down and really knew how to act. She was the only actor and character that did not seem phony. 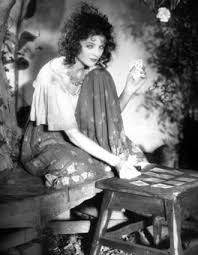 Loretta Young as I mentioned was only sixteen and her acting had yet to improve. But goodness was she so pretty! She was like pretty, adorable. Young was perfect in the role as the ingénue she had the look. 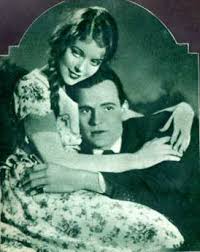 Posted by UneCinephile at 11:52 PM