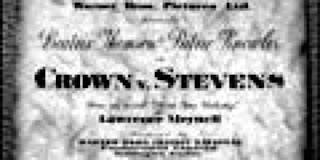 Never heard of Crown vs. Stevens before? No worries because I never heard of it before TCM aired it the other day. I only watched it because Patric Knowles aka Warner Bros. other Errol Flynn played a leading role.
The film begins with Chris Jensen (Knowles) at a nightclub with his girlfriend Mamie. He proposes to her only after a month of dating. He tells Mamie that he has to know her answer because he has to wait to ask to have his pay raised so he can begin to pay the ring off. Mamie convinces Chris to let her wear the ring. The following day Chris asks his boss for a raise and the boss a Mr. Stevens says he cannot give him the pay they are only a small decorating firm with a somewhat limited clientele. Mamie calls him at work to say she is not going to marry him she has fallen in love with a rich man. She refuses to give back the ring because she wants something to remember him by. 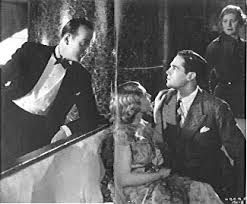 Now Chris is out of nineteen pounds and without a raise it will take him a long time to pay the loan shark off he got the money from. Chris goes to the loan shark to explain his problem. The man says he must pay the money back. Chris then goes to Mr. Stevens to ask for him for an advance on his pay. The boss yet again refuses Chris’s request. Chris goes back to the loan shark to try to work something out. When he walks into the office he finds the loan shark slumped over his desk dead from a bullet to the head. A woman comes out of the shadows of the room. She warns Chris to stay where he is or else she will do to him what she did to the dead man.
Mr. Stevens asks Chris to run over to his house to pick up one of the accounting books. Chris retrieves the book, as he looks up from the book he can see his boss’s wife Doris. She is the woman who killed the loan shark. Doris explains that she did not mean to kill the man but he attacked her and the gun went off. She did not want to go to the police because her husband would have turned her out. She only went to the loan shark because her husband was not giving her money. When Chris gets back to the office the police are there looking at Mr. Stevens’ gun. They found Doris’s name in the loan shark’s book she had tried to burn. The gun is the wrong caliber and cross Mrs. Stevens off their list of suspects.

Doris’s friend Ella comes over the house. Ella is dripping with new furs and clothes and jewelry. She is engaged to a man with a lot of money. Doris is upset because she wants the things that Ella has. Ella thought Doris had married someone with money. Doris thought she did too and now she has no new clothes and her house is bare of luxuries. Ella tells her friend not to worry hopefully Stevens has left her money in his will. Ella parts telling Doris there will be a party at her place that night.
Doris goes to the party. Stevens is made at his wife for coming home late and drunk. He is even more upset because he is getting sick with a cold and wanted her to take care of him. A few days later Doris calls Chris at the office to tell him her husband is very sick and his condition is worsening and that she wants to take him away to get better. Unfortunately for Doris her lie falls apart when the foreman of the office visits Mr. Stevens and sees that his boss is not gravely ill at all. Chris goes over to the house to have Mrs. Stevens sign the payroll for the week. Doris tells him that her husband is too ill to come downstairs he has just gone to sleep for the night. Now Chris is worried that Doris might do something to her husband. He tells his friend Molly about what he saw at the loan shark’s office.
Doris has brought a strong sleeping solution. She plans to kill her husband by giving him an overdose. Mr. Stevens reads about the murder of the loan shark and realizes the gun belongs to Doris. His wife blames the innocent maid and fires the girl. She gives a glass of milk with the sleeping solution to her husband. He drinks the whole glass and immediately starts to feel out of sorts. As he walks down the stairs he becomes very tired. Doris tells him that fresh air will do him good he must try to get outside to the car. In the car he falls asleep. Doris turns the key and starts the car. She walks out of the garage closing all the doors and leaves Mr. Stevens to die. Before Doris does anything else she pours the sleeping solution down the drain.
Chris decides to tell Mr. Stevens about the murder his wife committed and brings Molly along. Doris answers the door and tells Chris her husband has been asleep for hours. Molly drove him over in her car and by accident she put the car in reverse instead of drive. The car backs up to the garage. Chris hears the engine running and someone inside. He gets out of the car and finds Mr. Stevens on the floor of the garage. At the same time the maid comes back with the police suspecting something is going on. They are just in time to see Chris take Mr. Stevens out of the garage. Doris pretends to play dumb for a while and lie and then she confess her plan to kill her husband once she sees he is alive.
Obviously there is no court scene and the title Crown vs. Stevens makes no sense. The film is light with a little suspense. Some of the acting is a little over the top but for the most part all the actors did very well. The studio that made this film was a sister studio to Warner Bros. Warner Bros. saw Patric Knowles and brought him to California. Knowles is such a good actor I always enjoy seeing him in films. Crown vs. Stevens is not available on Youtube or DVD. It is not that great of a film but if TCM ever airs it again give it a watch. 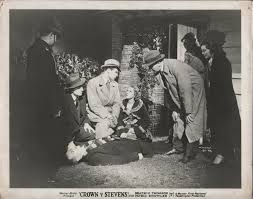 Posted by UneCinephile at 11:40 PM