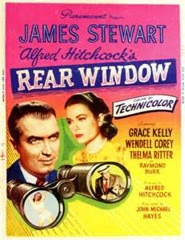 “Why would a man leave his apartment three times on a rainy night with a suitcase and come back three times?”
When I first watched Rear Window a few years ago I was not too much of a fan of it. James Stewart as always bothered me and he was made even worse just sitting around in a wheelchair being weird and creepy spying on his neighbor. But like most of Hitchcock’s later films I have seen and not been too crazy about I gave it another go. I never mind doing rewatching a Hitchcock film especially because I have a better understanding of classic films and his other works. Rear Window I had wanted to watch again and I finally did with my brother Anthony who is majoring in film. We had a good time watching it together with our current, more mature film knowledge.
L.B. Jefferies (Stewart) has been confined to his Greenwich Village apartment since breaking his leg. As the camera shows us when it pans L.B.’s living room he is a photographer who has traveled all over the world. It also shows us a photograph of a race car crashing with parts scattered all over heading towards L.B. and his camera. His closeness to the crash has caused his broken leg. He has positioned himself and his wheelchair in front of the window which faces a very active courtyard with several neighbors and their different personalities. One neighbor dances around her apartment in her underwear, an older couple with no children dote on their dog and sleep on the balcony at night, a lonely old maid sits her house wishing for someone to love her, a man is being nagged by his invalid wife, and a song writer taps way on his piano trying to compose a hit. 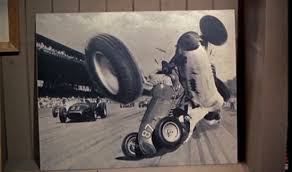 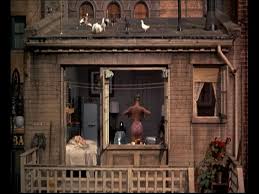 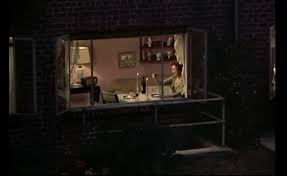 L.B. has been asleep in his chair for most of the afternoon. He is woken by his girlfriend Lisa Fremont (Grace Kelly) moving in to kiss him. Lisa has come with the intentions of feeding L.B. dinner made by the 21 Club and to spend the night. The couple discusses the idea of marriage. They both love each other but they have different ideas of married life- Lisa wants L.B. to settle down and stop traveling while, on the other hand, L.B. does not want to stop traveling he does not want to become a high society portrait photographer. Both of them become upset by the conversation and winds up with Lisa changing her mind about spending the night.

Out of boredom, L.B. begins to look in on his neighbors around the courtyard. He pays special attention to the man and his invalid wife across the way. One day L.B. notices the wife is no longer around and the husband is acting suspiciously. He plants the idea in his mind that he man has murdered his nagging wife. Concerned L.B. calls a detective friend of his to investigate. The detective thinks L.B. has an over worked imagination because he does not have anything to do but he gives in and looks into the couple. He finds out their last name is Thorwald and that Mrs. Thorwald has gone on a trip by train since he found of her luggage had been unloaded at a station.
L.B. is not happy with what his friend has found. He decides to investigate Thorwald on his own. He gets Lisa involved in his spying and manages to convince her Thorwald has killed his wife. L.B. even manages to get his physical therapist Stella (Thelma Ritter) involved. L.B.’s curiosity has no become dangerous since Thorwald now knows he is being watched. 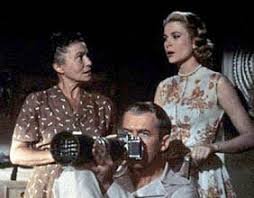 Hitchcock, as always, manages to grab his audience’s attention by making real life activities, and even the weather, suspenseful. He creates the tension by having the story take place during a heat wave in a crowded New York City courtyard made up of several apartment complexes. The tension is also created by L.B.’s boredom, he is anxious and going out of his mind sitting in his wheelchair unable to travel and take pictures. Ken Mogg in his book The Alfred Hitchcock Story best explains how the director grabs our attention- “Stella’s opening remark from the doorway, ticking Jeff off for being a Peeping Tom, rivets our attention.” The reason her remark “rivets our attention” is because we are all guilty of being Peeping Toms. Whenever a window is open no one can resist seeing how someone else lives or see what they do when they think no one is looking.
Rear Window is the perfect type of film Hitchcock liked to make. Hitchcock described the film best to Francois Truffaut in their sessions of interviews, “What you see across the way is a group of little stories, as you say, mirror a small universe.” As I mentioned every neighbor shown in the courtyard has their own personalities and comforts. They are all living in their own small universe which unfortunately is being scrutinized by this one man. I think the most brilliant aspect of the film that I had not picked up until I read about is how the murderer and his wife mirror L.B. and Lisa. L.B. is confined to his wheelchair as Mrs. Thorwald is confined to her bed while Lisa and Mr. Thorwald are able to move about in the world. Hitchcock compares this symmetry to Shadow of a Doubt which is a story of good versus evil. Truffaut brings up another fantastic aspect of the film which looking back on it should have been so obvious (well it was I picked up on this but only slightly because I was trying not to let James Stewart get to me). He states, “All the stories have a common denominator in that they involve some aspect of love. James Stewart’s problem is that he doesn’t want to marry Grace Kelly. Everything he sees across the way has a bearing on love and marriage.” After reading this I believe this bearing brings about more tension to the story. Time and again Hitchcock explored love and tense relationships- the perfect examples being Spellbound and Notorious. I believe that Lisa puts a burden on L.B.’s shoulders when she brings up the subject of love and wanting to marry him and that burden is also put on our shoulders because we wait to see what his final decision is and we have the burden of the thought of what he will decide.
Even though I am not a super hug fan of James Stewart I thought he was alright in this role- meaning he did not drive me up a wall like he usually does. Stewart is just awkward with whomever he is paired with in films and I thought he was incredibly awkward looking paired with Grace Kelly. He was not like Cary Grant who just kept getting more handsome as he got older and could look right with younger actresses (Grant and Kelly were incredibly sexy together in To Catch a Thief). Stewart just looked like a creepy old man with Kelly as his love interest.

Grace Kelly also usually bothers me in her films but I really like her as Lisa Fremont. Much of the character of Lisa was based off Kelly herself. The screenwriter John Michael Hayes had observed Kelly while she was filming Dial M For Murder. He had seen her sense of humor and sexiness. In a sense Kelly was playing herself which worked out quite well. 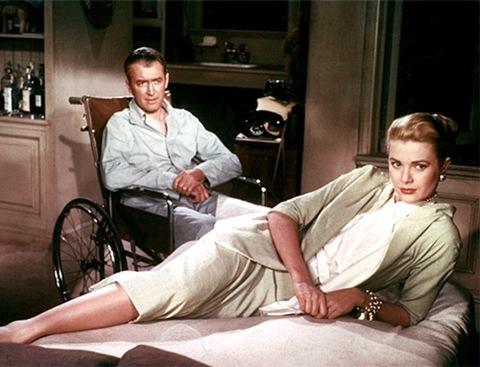 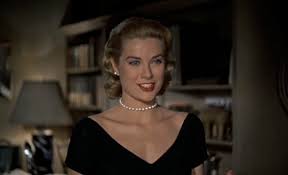 Edith Head designed the costumes for Grace Kelly. The designer said that Kelly as one of her favorite actresses to work with. You can see why. Kelly was gorgeous and anything she wore fit her so well and looked amazing on her. This was the first time that I could truly see how Edith Head designed her clothes for the characters. Lisa Fremont is a society model for fashion magazines. She is stylish, sophisticated and glamorous yet simple at the same time. Head made the most perfect costumes for the character of Lisa Fremont. Her costumes helped to bring Lisa to life. Looking back on the costumes Edith Head designed for other films she always designed for the character not the actress she seemed to design strictly for the characters’ personalities. When I was in London in three years ago I had the fortunate opportunity to be there when the Victoria and Albert Museum had an exhibit of Grace Kelly’s clothing entitled Grace Kelly: Style Icon (there is a fabulous book about it as well which I highly recommend taking a look at if you are interested in fashion or the actress). One of the pieces of clothing on display was the all black dress Kelly wore in Rear Window. I can remember seeing it and just staring at it for several minutes. I could not believe that I was standing in front of something from a Hitchcock film as well something Edith Head had designed. As a Hitchcock and an admirer of costume designing it was absolutely surreal to see this beautiful yet simple dress in person. 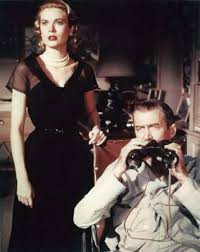 When Hitchcock made Rear Window he said that he had recharged and was feeling creative again. You can see his creativity in every facet of his direction. As I said at the beginning of this post I am very happy to have watched Rear Window again because I understand film and Hitchcock’s style more than I did a few years when I first sat through it. I think I can now say that Rear Window is one of my favorite Hitchcock films 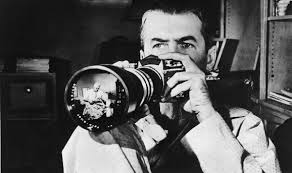 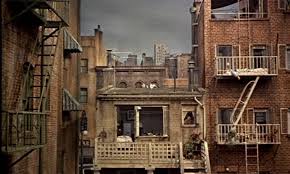