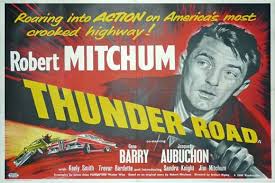 The only reason I ever sat through Thunder Road was because it was a Robert Mitchum film. If I had read the plot before I watched it I would not have even bothered to waste my time.
Honestly I stopped paying attention in the first twenty minutes so this summary will not be long at all. Lucas Doolin (Mitchum) and his family are moonshine makers and runner. He is the runner for his father. His cousin customizes the car to hold the liquor. The police are constantly on Lucas’s tail whenever he goes on a run. Now to make matters more difficult a city Mafioso wants in on the moonshine running and selling. When Lucas goes into town he is caught by the police. The police put him in jail but they really want to use him to get to the gang that wants in on the moonshine.

A whole lot of drama happens in between that bored me to death and I am sure it will bore you if I fill it in.
Robert Mitchum was one of the screenwriters. He came up with the story and even wrote the theme song. Mitchum was great I have yet to see him give a bad performance in a film. I was just very bored with the topic of cars and liquor. I guess that is the girl in me I need romance and drama… well there was romance and drama but it was so forced and crappy with the main story. Mitchum’s son James played his younger brother. He originally wanted Elvis in the role but Elvis’s manager sucked and said no because Elvis was not getting paid enough so Mitchum put his son in the role. James was by far the better choice because, obviously, they look alike and he was a much better actor than Elvis. 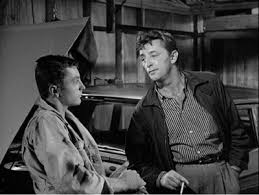 Thunder Road was not my kind of film at all. As I said I was bored with it in the first twenty minutes. The film was a big hit when it was released which I guess I can understand for the time period. Mitchum made Lucas a vet of the Korean War and his world was now dark and angry. I can see this appealing to many of the returning vets and boys coming of age at this time. The only way I can tell you to see Thunder Road is if you films with cars or like cult films which this has become. Otherwise completely skip Thunder Road. 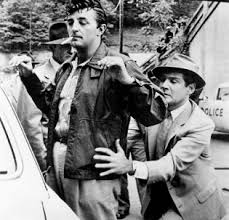