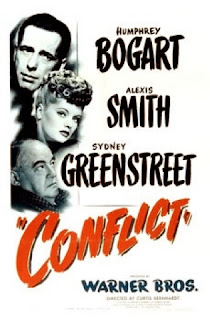 “What're you talking about?”
“Your ridiculous infatuation with Evelyn. Oh you thought I didn't know, didn't you? You must think I'm blind. The way you look at her and hang on her every word is positively nauseating.”

Of all the studios in old Hollywood Warner Bros. put out the grittiest films. They were the ones who released all the great gangster films in the 1930s as well as some of the best Pre-Code films. But what I like most about Warner Bros. is that unlike MGM or they were not afraid to cast their leading actors or actresses as unsavory characters. I think I have seen Humphrey Bogart play a bad guy more than I have seen him play a good guy and I have really enjoyed him in his bad guy roles. Even after his success as in good guy roles such as Casablanca, To Have and Have Not, and The Big Sleep the studio had him playing a bad guy. The studio had Bogart playing a murderer in the 1945 film Conflict.
Richard Mason (Bogart) is an architect. Every day he comes home to his  nagging wife Kathryn who tells him all his dislikes are just in his head and with some work he can get over them. Kathryn also gets on his case about he is infatuated with her sister Evelyn (Alexis Smith). He does not respond to what she said about her sister at first but then he confesses he does love Evelyn.
Their friend Dr. Hamilton (Sidney Greenstreet) throws them an anniversary party. Dr. Hamilton is a psychologist who specializes in dreams and thoughts. On the way home from the party Richard was looking at Evelyn in the backseat and gets into an accident. Kathryn and Evelyn are fine but Richard suffers a broken ankle. Five weeks later Richard’s ankle is better but he still cannot stand on it. The doctors think it is all in his mind and suggests he take a vacation to the mountains. On the day they are to leave Richard sends the servants home early.

He receives a call from a co-worker and they have to meet that night. Richard sends Kathryn on her way by herself while he stays behind. Before leaving town she stops by to see Dr. Hamilton to ask him to check on Richard the following morning.

While on the mountain road Kathryn cannot drive any further from a car blocking her way. A man is standing in the trees. Frightened she goes to turn the car around. The man comes out of the trees. The man is Richard, he is walking without help towards her. Next thing all of Kathryn’s personal items are on the ground and Richard is pushing the car over the edge of the mountain. To cover his bases when he gets home Richard calls the hotel to see if Kathryn has arrived.
When he claims to be worried about his wife Richard calls the police. He even has Evelyn come by the house. Evelyn asks Richard of there had been anything going on with her sister before she left. Richard tells her that Kathryn had been imagining he was in love with her (Evelyn). The police call they say they may have some evidence. A man claims to have stolen her pocketbook in the city. Richard gets mad at him and starts yelling. Dr. Hamilton suggests going to the mountains with him to calm his nerves and for Evelyn to come along as well. In his room at the house that night Richard smells Kathryn’s perfume. He also finds her house key on the and even her wedding ring.
At the lodge Richard receives a call. When he picks up the call is disconnected. He asks the operator who the person on the other line was. The operator tells Richard it was a woman who might have said it was his wife Mrs. Mason calling but the line was bad.
Back in town Richard receives a letter written in Kathryn’s handwriting. In the letter is a ticket to a pawn shop. When he goes to the shop he hands the person a receipt. The receipt is for her locket she was wearing the night she was killed. The owner describes Kathryn as the one who pawned the locket. Richard later brings the detective back to the shop. The real owner is there now and the book with Kathryn’s signature is gone.

Richard eventually begins to break down his conscience is eating away his mind. In a panic he goes back to where he left Kathryn’s body in the car. The police and Dr. Hamilton are there waiting for him. Everyone knew Richard killed Kathryn they just needed the evidence. Dr. Hamilton knew he was the murderer when he said at the police station that Kathryn had been wearing a pink rose, he had put the rose on Kathryn’s jacket the night she had left home after she had left Richard behind at the house. 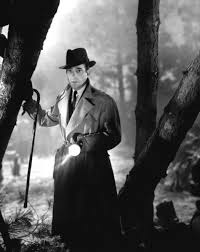 Humphrey Bogart was really good. I never give the man enough credit because to me he was not versatile he always played a tough guy. I thought he was excellent as the husband who is racked by guilt and leads the police straight to the murder he committed. You can see all the anxiety and worry on his face. The rest of the cast did not leave an impression on me. I cannot recall how well their performance was. Maybe it was the story as well that I do not remember their characters that well.
Conflict was an alright film. I liked how we knew who the killer was and how it was all about how the killer acted and how he came to be caught. It does not stand out as one of Humphrey Bogart’s best films but it is one I enjoyed watching him. Even after all those good guy roles he was still casted to be made a bad guy… a bad guy we felt bad for because he just wanted his wife to go away and stop nagging him. Conflict is available on DVD. I watched the film on TCM. I recommend seeing Conflict for Bogart’s performance.
Posted by UneCinephile at 9:59 PM