Trade Winds is the kind of film that should be more well known. The story is not earth shatteringly amazing and the direction is so-so, it becomes a bit too much and over dramatic in some scenes. The reason Trade Winds should be more well known is because of the cast and their acting. The acting is not even stand out acting but every one of the cast members was top notch and perfect in their roles.
Kay Kerrigan (Joan Bennett) gets a call from the police that they have found her sister’s body. Kay goes to her sister’s boyfriend Thomas Bruhme. She thinks Bruhme is the murderer and wants to kill him. It appears she does kill him. In the car Kay realizes she left her pocketbook in the boyfriend’s apartment.
Detective Ben Blodgett (Ralph Bellamy) has been assigned to the case. He learns that Bruhme died from a crack to the skull. Since she left her pocketbook in the apartment Kay is Blodgett’s number one suspects and sends the police to search for her. The police chase Kay to the edge of a river. She drives her car into the water. Ben thinks Kay has killed herself and officially closes the case. Kay survived the crash and swims away. The police know Kay is still alive and she knows they are still after her. She makes it to Honolulu where she dyes her hair black from her natural blonde. 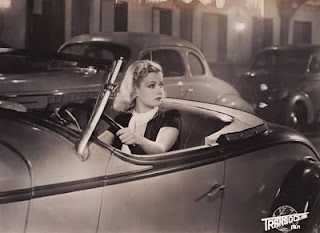 The police commissioner Blackton (Thomas Mitchell) points out that Bruhme’s father owns the paper and that he is out for Kay along with the rest of the city. Blackton is brought Kay’s ring from a pawn shop. After this he puts Sam Wye (Fredric March), a former police detective, on the case. Although Sam had been fired from the police force, Blackton wants him on the case because he can find anyone. Blackton sends along Blodgett to keep an eye on Sam.
Sam is able to get information on Kay from some girls. They tell him a woman fitting her description came in with blonde hair for a dye job and that she had a ticket for Japan. Sam treks it to Japan and finds out from a Geisha that Kay went to Shanghai. In Shanghai Ben walks right into Kay not knowing she is now a brunette. For some reason he is convinced she is in New Zealand. Sam’s secretary Jeanie (Ann Sothern) shows up in China. She is also looking for Kay because Bruhme’s father has set a $100,000 reward for whoever catches Kay. Jeanie tracked Kay down through the British embassy and steamship log. Sam takes what Jeanie has told him and has her stay behind to pay the bill. He meets Kay on the ship. Sam immediately likes her. They begin to see each other when they land in Saigon.
Jeanie winds up finding Sam and Kay and she becomes Kay’s maid. She knows perfectly well who Kay is. Ben also meets them in Saigon. He lets it slip that he and Sam are detectives. Jeanie wants half of the reward money but Sam does not want to hand Kay over. She almost blackmails her boss. To get the money Jeanie calls Kay to tell her to leave because she read Sam’s cable and saw that he left her out.
Kay thought she got away but Sam found her again. He tells her he is going back to San Francisco but he is going to report that he failed to her. Blodgett figures out that the woman he thought was Mary Holden is actually Kay Kerrigan. He sends a cable to San Francisco that Sam has no intentions of turning Kay in. Sam gets a cable from Blackton that another detective named Faulkner will pick Kay up in Bombay. Jeanie and Ben are on the same ship. When Sam sees Faulkner he turns Jeanie over and he makes Ben think a woman in a bathrobe was Kay and Ben winds up shutting her up in the bathroom.

Sam and Kay make it to a remote island and are finally alone. They talk about staying on the island forever. Unfortunately Faulkner finds them. The detective shoots at them. Sam makes it look like he had Kay the whole time. He has her handcuffed. Back in San Francisco Sam gets the $100,000 reward. Kay feels cheap after the way Sam treated her, she does not care if she lives or dies. Ben and Jeanie go to see Kay in jail. They bring her what they think are her gloves from Bruhme’s apartment. Kay tells them they are not her gloves.
Sam knows Kay is not the killer. His reasons for everything he did are that the killer would have no issue coming out in public now that someone was arrested for the crime. Besides seeing Kay’s sister Bruhme had been seeing six other women. Sam plans a party and the one who does not show up is the guilty one. Every one of the women and some of their husbands come to the party. Sam has a fake radio broadcast of the trial playing. One of the husbands becomes upset that Kay is sentenced for the murder and confesses he is the actual murderer.
As I mentioned at the beginning the cast is great. Joan Bennett was gorgeous and wonderful. I am still trying to get through some more of her films but for some reason with every film I have seen her in I have been surprised by her acting. I do not know what I am expecting from her but she just always surprises me and it is in a good way. I have enjoyed her acting in the films I have seen of hers so far. Trade Winds is the film where Bennett dyed her hair brunette and never went back to being a blonde. Her brunette hair completely changed her career. She went from being cast as these fragile innocent women to being gorgeous alluring femme fatales. Fredric March I feel does not get enough attention. The man could do drama and comedy and whatever he was tasked to act with the utmost perfection. He made a perfect quick thinking detective. It would have been interesting to see March and Bennett in a noir together as the detective and femme fatale, it totally could have worked. Ralph Bellamy was no longer the mean angry rough guy he was in his Pre-Code days. He was now the bumbling silly actor in films to get a laugh or bring lightness. Regardless I still loved Bellamy in this. He was very funny especially when he pushed the woman into the bathroom and kept her in there on the ship thinking the woman was Kay. I must confess that I lied when I said Maisie Goes to Reno was the first time I had ever seen Ann Sothern in a film. I did not even realize she was in it I did not really pay attention to her character. From what I can recall she was very good too. I liked how she gave Sam a run for his money. Thomas Mitchell is not in the film too much. I just always enjoy seeing him in films he always added something to whatever he was in. Every one of the main cast members worked very well together.


Trade Winds is a decent film. The story is not too shocking and it is predictable given that Joan Bennett in the lead could not be the actual murderer she had to be innocent to end up with the good guy. Besides the predictable story Trade Winds is a film I would recommend seeing especially for the cast. The film is not available on DVD or Youtube, hopefully TCM will air it again in the near future.

Posted by UneCinephile at 4:57 PM