Europe’ 51 is one of the films that Ingrid Bergman made after she married Italian director Roberto Rossellini. Bergman was an actress with immense talent who gave her all for any part she was given. Rossellini helped to usher in a whole new style of direction and storytelling. Unfortunately these two talented people could not come together to create a long lasting cinema impact (well, I guess that could be debated depending on how you look at their situation).
Irene Girard (Bergman) is the wife of an American ambassador living in Italy. One day she comes home from being out in town and is in a hurry to get herself together for a dinner party with her friends. Irene does not pay too much attention to her son Michel. He was alone all day with nothing to do. While everyone is eating dinner the maid runs into the room to tell Irene that Michel wants to see her. When Irene goes to see her son he says he has a stomach ache. She tells him his stomach ache is all in head and yells at him. A few minutes later the maid rushes into the room all upset that Michel has fallen down the stairs.

Irene and her husband George are told by doctors at the hospital that Michel will be fine he has broken his hip and that he can recover at home. Their friend Andre knows the doctor who operated on Michel. The doctor told him he believes that Michel’s fall was not an accident. After hearing this Irene feels terrible. She hugs Michel and tells him she will never leave him she will always be with him. A nurse comes into the room to give Michel some medication to control the pain. Irene leaves the room to speak with George. She tells George what the doctor had said. George does not believe any of it. Irene says she feels it is rue and they have to change the way they live. Irene went to sit on the couch when the nurse rushes into the room for George. Michel has died from a blood clot.

For ten days Irene does not come out of her room. She cannot pull herself together her guilt is so heavy on her shoulders. George comes in worried about her he tries to get her to come out of her room. All she wants is time to grieve. When she finally leaves her room Irene goes out for a drive with Andre. She tells Andre that Michel’s death is her fault. Andre replies that her son’s death was not her fault and blames it on the post-war society. He mentions that he is trying to help a very poor family with a sick son. The son needs medicine that the family cannot afford. He suggests to Irene that she help them pay for what the boy needs.
After she helps the boy Irene feels invigorated. Now she makes it her goal to help as many needy people as she can. No one besides her understands her need and want to help people, she could not help her son so she feels she must help others. Irene goes out for hours at a time without telling George or any of her friends where she is going. George thinks his wife is having an affair with Andre. When George finds out what Irene has been doing he takes her to a mental hospital to be checked out. Irene is still in her right mind she knows what is happening. She goes through all the tests without any argument. On the day she is to be released Irene confesses that she feels compelled to help those who are sick and dying and in need her life would mean nothing without those feelings. The doctors and George feel she must stay in the hospital. All the people Irene was able to help come to the hospital. When they hear she is not to be released they cry and look at her from a window as if she was a saint. 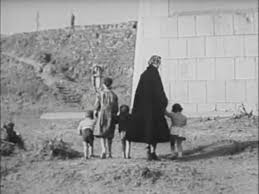 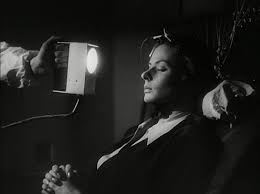 Ingrid Bergman was fantastic. She probably could have acted out the phone book and nailed it. If someone of her talent had not been in this film I highly doubt the film would be as well known or known at all today. You cannot sympathize with her character whatsoever. We are not meant to at the beginning but I found myself not liking her anymore once she started helping the poor people. I think the only time I felt bad for Irene was when she was in bed because Ingrid Bergman played that scene flawlessly there was so much pain and sadness and guilt on her face.

Roberto Rossellini’s direction was incredible. There is a scene where Irene covers for one of the women she is helping. Rossellini filmed all the machines moving in their slow deafening speed. It was from the point of view of Irene who had never step foot in a factory or most likely never worked a day in her life. The machines were overwhelming. Another scene I liked was when Irene was in the hospital and has to walk to the doctor’s office. Again Rossellini filmed the walk from Irene’s point of view but also showed her straight yet horrified face. You get the sense that Irene is paranoid of these truly insane women staring her down as if she was fresh meat.


Europe’51 never reaches its potential. It starts off somewhat decent and then completely falls apart when Irene watches a woman die. I do suggest seeing Europe’51 because the filmmaking is great and Ingrid Bergman was nothing short of fantastic.
Posted by UneCinephile at 11:45 PM