Since today is Halloween I tried to watch a “scary” movie to honor this wonderful American tradition of eating way too much candy and spending way too much on costumes. I chose to watch Joan Fontaine’s 1966 film The Witches… and I could not have picked more of a stinker.
The film starts off with school teacher Gwen Mayfield (Fontaine) clearing her classroom trying to get away. Gwen is teaching in Africa and there is a tribal rebellion and they want all the foreigners gone. 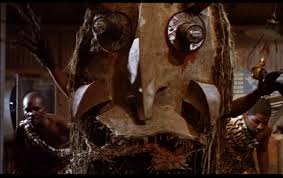 Back in London Gwen has an interview with Alan Bax to work at a school the small town of Heddaby. He mentions her work in Africa and how she had suffered a nervous breakdown after what had happened. Despite the breakdown Alan gives Gwen a position at the private school he and his sister Stephanie.
Gwen meets Stephanie before Alan comes home. When Gwen mentions something about Alan being a priest Stephanie goes around the conversation. She finds out that Alan is not a priest he had wanted to but he failed, he wears the collar for security. 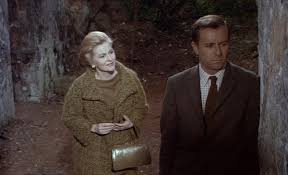 At school in Gwen’s class is a shy quiet girl named Linda. She carries around a doll with her wherever she goes. Gwen is told that Linda goes around with a boy in named Ronny. While in town that weekend Gwen sees Linda Ronny together and they get yelled at for courting in public. The following day Linda is not in class. She gets a note from Ronny that he saw Linda’s grandmother run Linda’s hand through a laundry machine and that is why Linda is not in that day. Gwen goes to check on Linda. Linda tells Gwen that Ronny saw everything and that he should not have followed her. When Gwen leaves she notices the cat that comes to her place is there waiting. The grandmother tells Gwen that the cat is really hers. As Gwen is walking away the grandmother takes the cat and tells it to keep an eye on Gwen. 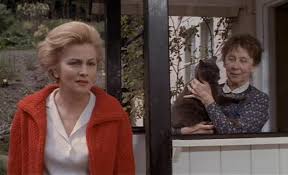 Gwen tries to get Ronny into a better school. She wants him to go to a school away from the town where he will have more opportunities since he is so smart. Ronny’s father does not want his son to go away. Gwen tells them she will give Ronny more homework to help him boost up his grades so he can eventually get into a better school. Alan says it would have been better for Ronny to go away. Gwen cannot understand why Ronny should go away because it is not benefiting him or Linda if he goes away. Soon Ronny does not show up to school. When Gwen goes to check on him Ronny is being taken away in an ambulance to the hospital. Ronny is in the hospital for a few days. Gwen talks to Ronny’s father. The father says that the mother is Welsh and she is very superstitious. She came down with the shingles the year before and thought someone had made it happen to her. Gwen confronts the mother about possible witchcraft that could have been used against Ronny. The mother freaks out and Gwen finds out from the father the following day that the mother has taken Ronny away to Wales to her family. The next day the father is found dead in the pond after he had told Gwen he wanted to go speak to Linda’s grandmother.
Gwen goes down to the pond to investigate what could have happened. She finds other footprints in the mud that were not made just by the father. All the sudden a herd of sheep com running towards her and she falls and cuts her forehead. Stephanie comes up to her since she was chasing her dogs that had been chasing the sheep. Gwen tells Stephanie that she believe the father had stumbled onto something going on and he was drowned. That night Gwen is given a sedative to go to sleep. In the middle of the night she thinks she sees tribal things like she had seen in Africa. Next thing Gwen knows she has woken up a year later in a rest home with no memory about what happened. The doctors tell her her nervous breakdown had returned and it was worse than before. Gwen begins to remember things such as Linda and the town.
What happens next I am not even going to write down because it was so damn bad and ridiculous and embarrassing for Joan Fontaine and the entire cast.
Just have to throw this out there because I am a nerd: the English town of Cornwall was mentioned. One of Joan Fontaine's best roles (maybe even her greatest) was in Rebecca. The film takes place in Cornwall where the author of the book, Daphne Du Maurier, was from.


The Witches was terrible. The beginning of the film was not too bad but the second half is a load of crap. This was not much of a Halloween film. I feel bad for Joan Fontaine this was her last major starring role and she went out on a bomb. I think I could have watched the other Witches film with Angelica Houston and gotten away with that being a Halloween film more than this one. 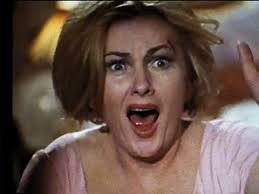 Posted by UneCinephile at 10:48 PM