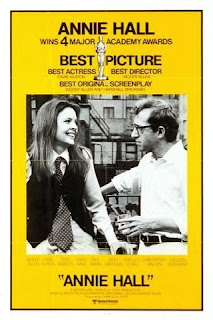 “Love fades. That is a depressing thought.”

Ever since I became interested in movies I have heard about Woody Allen’s Annie Hall. I have seen some of his later films such as Midnight in Paris and Scoop but I had never seen Annie Hall or any of his other earlier films. There have been points in my movie obsessed life where I have broken down and watch a movie that is always raved about as one of the greatest of all time. Some of them have lived up to their reputation and others have not. Annie Hall was one of the movies that to me did not live up to its reputation.
Alvy Singer (Allen) is a comedian from New York. He has a very pessimistic view of the world. He feels the world is against for being a Jew and he feels New York City is the only great place in the world and cannot understand why anyone would ever want to leave it. Alvy has been married twice but the women never fully understood him and he never tried to be a part of their lives with certain things.
Alvy finally, truly falls in love with a woman named Annie Hall (Diane Keaton). He met her when she was a tennis partner for his friend. She is nerdy and a bit nervous when they first talk. She takes him back to her place for a drink. Soon they are dating. They spend a great deal of time together and never want to be apart. Before long, though, Annie begins to feel smothered by Alvy. He gets jealous when he sees her walking with her professor after class and just become completely overwhelming. Eventually Annie breaks up with him for good. Alvy wants to try to get back together. He travels all the way out to California just to ask her to marry him but she gets upset, tells him no, and walks away.
I did not find the story to be that great. Both Alvy and Annie got a bit annoying after a while. But I can appreciate the writing and many of the scenes were genius. The scenes I liked were when Alvy broke the fourth wall and spoke to the audience, when he walked around New York talking to himself and other people answered him, and when there was a split screen between either Alvy and Annie or one was their families when he was at her parent’s house for Easter. There was one joke right at the beginning I cracked up with. He mentions to Annie how two guys that were talking to him were like characters from The Godfather. Diane Keaton was in The Godfather movies as Michael Corleone’s wife.
With Annie Hall I liked it but, as I said at the beginning of this review, I do not think it that great that it can be considered one of the greatest films ever made. I think it is a completely original movie the way Woody Allen wrote and directed it and I will say it is a great inspiration for any aspiring filmmaker and it is awesome to watch as a movie fan. Alvy’s asides to the audience were great ways to dig into his character and to know what he was thinking at certain moments. I like knowing what a character is thinking so that aspect of the movie was my favorite. I will say watch Annie Hall. Even though I was not a great huge fan of the movie it is still worth watching for the writing and the direction. Posted by UneCinephile at 10:28 PM