Being happy is one of the most important things in your life. A few years ago I went through a rough time. Nothing was working in my life and I felt miserable. I thought I would never be happy again. I could not even find any happiness in watching movies or working on this blog which are two of the things I enjoy most. Eventually things worked out and I got back on track. It took me a while to be truly happy and feel a hundred percent. I feel much better now because I feel more on track with my life and I no longer have the added stress of grad school hanging over me.
Every human seeks out happiness in the world. They seek happiness in a friend, a loved one, a book, a movie, a blog, and so on and so on. We seek signs of fortune that tells us our happiness is within our reach. In the 1918 silent film The Bluebird, a tradition is told that a bluebird flies in the sky and it brings happiness to those who see it. But not everyone can see the bluebird because they are blinded by wealth and other unfortunate things. Children are the ones most likely to see the bird because they are not yet corrupted.
Mytl and her brother Tyltyl are not too poor but they are not wealthy. They live in a small house with their parents, a dog, and a cat. Across the way from them live two wealthy children in a big house. In another direction is a poor old lady and her sick daughter. The old lady comes to the house asking if she could borrow their bird to bring to her daughter to cheer her up. Tyltyl and Mytl tell the old lady that she cannot take their bird away.
A scarf Tyltyl was wearing falls to the ground. His mother tells him not to hurt the scarf it was the last thing their grandmother made him before she died. Tyltyl then starts to joke how water has a soul and so does sugar and bread.
As Mytl and Tyltyl sleep the beams from the moon appear as fairies above their heads. They wake up and see the lights on at the rich children’s house where there is a party. The old lady comes to house. She tells the siblings that she is not the old lady from next door but a fairy named Berylune. She tells them to get dressed quickly to come with her on a journey. When they are done getting dressed, still as the old lady, she makes a cap appear that has a diamond on the front. When the diamond is turned they can see things as never before. Berylune then has Mytl and Tyltyl close their eyes. The children open their eyes to see the old lady has turned into a beautiful fairy. They also see the souls of their dog and cat and the fire and sugar and water and bread come alive as people. Berylune has the children set out on a journey to find the bluebird of happiness. The cat asks Berylune if the journey will be dangerous. She tells the cat that all the souls that have come to life will die at the end of the journey. 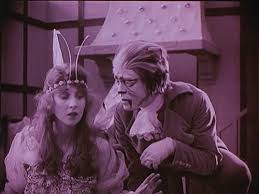 Berylune takes them to her palace. At the palace she relays to Mytl and Tyltyl that they must go to the Palace of Night without her because she cannot go there. The Queen of Night is not too pleased to see Man in her palace because they have banished all of her mysteries. Behind certain doors of her palace are her mysteries such as ghosts and monsters and phantoms. One door shows Mytl and Tyltyl a lake where there are hundreds of bluebirds flying around. They go to take one but the Queen lets them know the birds are not the ones they are looking for because real bluebirds never die.

They go back to Berylune. She takes them to a cemetery where, at midnight, with the help of the diamond, they will be able to see their grandparents who have died. The children walk through the cemetery to a house where their grandparents are on the porch waiting for them. Mytl asks her grandmother if her brothers and sisters who had died are there as well. Each one comes downstairs to greet her. Tyltyl and the grandfather are by a bird. The grandparents used to have a blackbird which has now turned blue. The children take the bluebird with them but once they are away from the house the bird is no longer in the cage.

Mytl and Tyltyl are next taken to the Palace of Happiness and Luxury. In this palace are the embodiments of different types of happiness- landowner happiness, eat too much when they’re not hungry, etc. They see the symbol of Maternal Love in a scene of heaven. They then see children who are yet to be born.

Their journey comes to end after the Palace of Happiness and Luxury. They were never able to find the bluebird and the animals and objects have to return to how they were.
Mytl and Tyltyl’s journey was just a dream. They awake to their mother greeting them good morning and are very happy to see her. The old lady comes back. Mytl and Tyltyl tell the old lady she can bring the bird home to her sick daughter to make her happy. When they go to the bird they realize it is the bluebird they had been searching for. The old lady later returns with her daughter who carried the bird over. The bluebird flies away but Mytl and Tyltyl are not upset for they found the bird together.


The Bluebird was a good film. I liked the story very much. I liked how the children were shown all the things that happiness in life could be or had been to them. Jacques Tourner excellently directed this film. His direction was gentle and simple and beautiful. Most of all his direction was not boring. The film moved along at a great pace even if there were some scenes that kind of dragged (to me it is rare that a silent film does not have scenes that drag). I really liked the story. The Bluebird is a great reminder that the happiness we seek is all around us in so many different forms and that we just have to know how to find and see it. 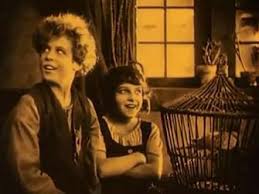 Posted by UneCinephile at 8:26 PM