Trouble in Paradise is my ideal film story. I love stories with thieves and con artists. I love the romanticized idea of sophisticated jewel thieves. Usually they are men who are devishly handsome and ooze charm. Trouble in Paradise also has the added bonus of having been made in the glamorous film world of the 1930s on top of being a story about thieves and con artists. To me it is the perfect setting with an almost perfect story.
In Italy, a man has been knocked unconscious. Two women are knocking on his door but get no answer. Staying in the next room is a Baron (Herbert Marshall). He is standing on the balcony of his hotel when he sees a beautiful woman (Miriam Hopkins) riding past his view on a gondola. The woman comes up to his room. She comes in a huff worried that people will start talking that a countess with a high social standing will be seen in the room of a Baron. The phone rings, the call is for the countess. She tells the Baron that it is the duchess of some country. On the other end it is just a regular woman and she calls the “countess” Lily and that her dog has done something to the carpet.
The man who was knocked out is named Francois Filiba (Edward Everett Horton). The police are in his room. He tells them that a man had just walked into his room claiming to be a doctor and wanted to check on his tonsils. Filiba tells the man there is nothing wrong with his tonsils. When this “doctor” told Filiba to open his mouth the man hit him and took his wallet.
The Baron’s servant tells him about Filiba being robbed. The “countess,” whose real name is Lily, tells him she knows he is a crook. He replies that he knows she is a thief herself she has taken Filiba’s wallet and he felt her take it out of his pocket. They figure each other out. The “Baron” is a world renowned thief named Gaston Monescu. Lily and Gaston become lovers and literal partners in crime.

In Paris Madame Mariette Colet (Kay Francis) runs a very successful perfume factory her husband had left to her when he died. She is seeing two men. One of them is simply called Major (Charles Ruggles) and the other happens to be Filiba. Mariette is playing them both. She does not have feelings for any one of them but likes their attention. She goes to an opera one night. She had arrived with Filiba and sat in a box with Major. During the day she had bought a brand new purse studded with diamonds. At a break in the opera Marietta goes to the bathroom. A moment later, Lily also walks out. When the opera is over Marietta is frantic about her bag it cost her 125,000 francs.
Lily and Gaston have situated themselves in a room in Paris. They are reading their own separate newspapers. Lily jumps up excitedly. She sees there is a reward for the missing purse with a reward of 20,000 francs. Gaston had planned to sell it but he figures he would not get half as much as the reward. They decide to be honest and give the bag back and collect the money. Men and women are lined up all around Mariette’s house thinking they have purse. Gaston comes in playing a sort of hero when a crazy Russian man comes in and tells her that people are suffering and she has the nerve to spend so much money on a simple bag. He speaks to the man in Russian and gets him out of the room. Gaston tells Mariette his name is M. Laval. He takes out all the things in her bag just to show that he has not taken anything out. As she looks around her room for her checkbook Gaston has a look around the house for a safe. He finds it and eventually works his way into getting Mariette to hire him as her secretary.

Gaston moves himself into every facet of Mariette’s life. He manages her money and even changes the amount of some of her insurance policies. He even hires Lily as his own secretary. Lily mentions that Mariette has a lot of jewelry but Gaston reminds her that they are only in it for the cash he does not want to take anything else.
Mariette throws a party where Major and Filiba are in attendance. Gaston sees Filiba and asks him if they have ever met before. Filiba thinks Gaston is just trying to butter up to him so he can move up the social ladder. But the part goes on Filiba cannot shake the feeling that he has met Gaston somewhere before. Gaston gets Lily alone and tells her they have to clear out Mariette’s money that night because Filiba will figure him out and blow their cover. He has Lily get them two fake Spanish passports and tickets to Munich for a midnight train. Mariette is supposed to be going to a party that night it is perfect for Gaston to take all her money. Unfortunately he did not plan on his boss seducing him. They try to talk each other into staying and going. Lily tries to get in touch with Gaston but he does not pick up the phone. 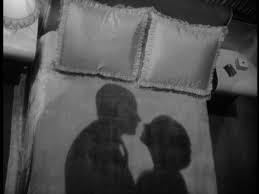 Gaston finally gets Mariette to leave to go to dinner at Major’s house. He calls Lily to buy a ticket for the following morning which makes her furious. At Major’s party, Filiba figures out who Gaston is. Mariette leaves she cannot handle what Filiba is going on about. Before she gets to her house, her business associate goes there and confronts Gaston. He knows who he really is. Gaston had arranged certain things that if need be he can make it look like the business associate had been the one stealing the money.
Lily is the next one to come to the house. She wants the money and she wants to get away from Gaston. She was worried he would become a gentleman and fall in love with Mariette. Just as she is about to storm out the front door Mariette’s car pulls up to the front. When Mariette comes in she immediately goes upstairs to Gaston. He confesses who he is because he knows she will not call the police. She loves him and he loves her. They both wish their relationship could have worked out. Lily is still in the house and she is furious. She confronts both Gaston and Mariette. She still takes the money from Mariette and Mariette lets her take it without any issue. Lily storms out of the room and Gaston follows. He comes back to tell Mariette that he has to leave.
In the car Lily and Gaston find they have both pick pocketed each other and fall in love all over again.

I really liked the cast. Miriam Hopkins gets top billing even though she is not in the film very much. With Hopkins I like her but after a while she can become too much. She seemed to be very aggressive but not in a bad way and she just talked too fast at certain moments and at times she just seems like she tries too hard. I honestly do not think the script allowed for Hopkins to get too crazy so she was actually quite calm and controlled and very good. I liked her with Herbert Marshall. Marshall I have seen him in like snotty society roles where he is stiff and boring. The man just oozed charm. I would have fallen for him in a moment. He was the perfect gentleman thief/con artist in the 1930s. Kay Francis was good but her character was such a bore. Mariette was way too gullible. The part definitely could have gone to someone with lesser talent but Mariette had a bigger part and thus needed a star. Her chemistry with Marshall was great.  I always like seeing Francis in films no matter what her role is.

Ernst Lubitsch was such a great director. His comedies are subtle, brilliant, and genius. There were so many innuendos and lines that if you catch them and understand them you cannot help but either laugh or blush. What I really like about Lubitsch’s comedies is the way he captured his characters’ sex appeal and the sexual tension between them. He also left a lot to the audience’s imagination which, let’s face it, is probably dirtier than what could have been shown on screen! I wish romantic comedies could be made like Lubitsch’s.


Now at the beginning of this review I said that Trouble in Paradise has an almost perfect story. As much as I liked the film and I liked the story thieves and con artists I did find it a bit boring. I think that comes down to the characters of Mariette and her just agreeing to everything and the rivalry between Major and Filiba for Mariette’s attention. Other than those aspects Trouble in Paradise is an excellent Pre-Code film (so much Pre-Code goodness that I can spend another page just gushing about it but I will hold back) and one I suggest watching if you can find it.
Posted by UneCinephile at 11:54 PM