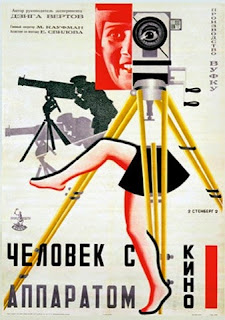 From the time the film industry was created there have been propaganda films. They are still used today to bolster nations and make them look good and decent to their people. Some are actual films like most of the films made during World War II. They had a story about a loved one going off to War or someone coming home from the War. And some propaganda films are documentaries. One of the most famous propaganda documentary films is Dziga Vertov’s Man With a Movie Camera.
Man With a Movie Camera is a documentary of the people of three different Ukrainian cities under Soviet rule. It is also a documentary about filmmaking. There are scenes of city life and then all the sudden there is a scene where you are being shown how parts of the film were edited.

Vertov begins the film showing a quiet town in the early morning. Then all the sudden the town comes alive and the people of the town are going about their daily business. He takes shots of stores and factories and then shows the faces of the people who work in them. Towards the end of the documentary he shows men and women enjoying leisure activities and sports.
There is no set story to Man With a Movie Camera. It is just a series of scenes of life and filmmaking. I think it is a genius look into life in 1929. No actors were involved in this film/documentary. The jump cuts and editing are exciting which makes it more intriguing and fascinating to watch. Without the cuts and the editing a film/documentary of this kind without them would have been boring. Once I got a sense for how the film was playing out it reminded of later surrealist films I have seen. It is abstract, poetic, and fanciful like surrealist films yet at the same time it strikes a chord with real life and human emotions. Man With a Movie Camera is a film I recommend for film and history buffs to watch.
Posted by UneCinephile at 11:35 PM