“When I get all my evidence together, I'm gonna have you tied up like a pig in a slaughterhouse.”

Happy Noirvember my fabulous followers. Ah, Film Noir, a fantastic genre (is considered a genre? So many things I have read say different things). Most of my favorite films are Noir. I just love the dark undertones and sleazy characters. I love the fact that in a hand full of the Noirs I have seen even the good guys and dames have a sleazy side to them. Why the hell not no one is ever really all good and innocent everybody has a dark side (cue Kelly Clarkson!).
I hate to say that I Wake Up Screaming will be my only post for Noirvember. I wish I could participate every year but every year since becoming an Old Hollywood fan I have been ass deep at the end of a semester in college. This year I am in the last semester of college ever!! I am currently completing my Masters degree and I have only a few weeks left to finish my thesis so I can finally graduate and get a real job! Hopefully next Noirvember I will be able to fully participate and be in Film Noir heaven. But for this month and this year here is my review for I Wake Up Screaming from 1941.
Frankie Christopher (Victor Mature) is being interrogated by a group of detectives in the basement of police station. They have him under heavy lights as they try to make him confess to the murder of a young girl named Vicky Lynn. Frankie swears up and down that he had nothing to do with the girl’s murder he was trying to help her become famous. He is a promoter he would never do anything to someone he was trying to promote. The police have him go over the day he met Vicky. He was with a few of his friend at a restaurant. Vicky was their waitress. He thought she was pretty and smart enough to be promoted as the next big thing. Sometime later Frankie took Vicky out to a club where society people frequented. She soon became a new high society girl and was offered jobs for modeling and acting. 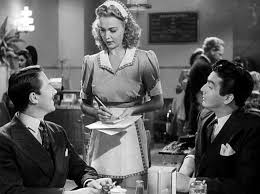 Jill (Betty Grable) is Vicky’s older sister. She came down to the station to discuss what happened. She recalls the night Vicky went out with Frankie for the first time. She had been sleeping on the couch waiting for Vicky to come home. She thought Vicky had stars in her eyes and tries to talk some sense into her. 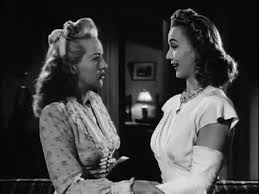 The police learn that Vicky had been given a long term movie contract out in California. She got the contract after doing a screen test and she did not tell Frankie about it. The police try to play the angle that Frankie was furious with her for going behind his back since he made her famous. They then ask Jill if there had been any other men in Vicky’s life. She tells them there was a man that was stalking Vicky from the time she was a waitress. She had gone to the restaurant to walk home with Vicky and she saw a man looking in the window at her and then on the street. Jill mentioned it to Vicky and she just brushed it off. The police do not believe Jill they think she is throwing them off to protect Frankie and she is the one who killed Vicky. As Jill is walking out of the room a detective named Cornell comes in. She points him out as the one who was stalking Vicky.
The night before the murder, Vicky, Jill, and Frankie took a drive together. Vicky was going to be leaving for California the next day. She mentions that Jill will be glad to get rid of her so she can be with Frankie. Vicky could see that Jill has feelings for Frankie but her sister will not admit it. The police found out about this exchange. They ask Jill what happened the day of the murder. Jill responds that she had come home early from work. She felt there was something wrong when she got off the elevator and the door to their apartment was open and music was playing. When she got into the apartment Frankie was standing over Vicky’s body.
The police chief lets Frankie go and he tells Frankie and Jill they believe the switchboard operator at the apartment was the one who killed Vicky because he was jealous. That night Frankie wakes in the middle of the night to Cornell sitting in a chair in his room. Cornell is convinced Frankie is the killer and he will do anything he can to bring him to justice. The following day Frankie tries to call Jill at the apartment but she is moving out. Henry picks up the phone he was never arrested or questioned.
Cornell starts to put the squeeze on Jill. He believes she killed her sister and tries to make her confess to the murder and to loving Frankie. When Cornell leaves her alone in her apartment Jill takes down a painting and in the back she keeps a letter Frankie had written. She gives him a call and they go out.
After spending time together they want to run away to get away from the cops. Unfortunately they cannot get away from the cops they are always on their backs. Frankie and Jill decide to take matters into their own hands and find the real killer.
The cast was very good. Betty Grable in a drama was interesting. It was nice to see her acting outside of a comedy or musical.  Victor Mature I have not seen in very many films. I liked him in this he fit into the male Noir role. He played the typical sleazy male at the beginning and then turned into this good, really caring guy. Carole Landis I have never seen in a film before. I liked her I would definitely like to see her in more films.

I Wake Up Screaming was a good Film Noir. It was not very suspenseful and I had the killer figured out the moment he was shown. The title of the film is misleading there was no one screaming or really waking up from a bad dream. I Wake Up Screaming is a Film Noir I recommend seeing. I was not upset that this was the only film I could watch for Noirvember.
Posted by UneCinephile at 9:10 PM