“I've come to ask for your daughter's hand in marriage.”
“How will you support her?”
“I don't know. I'll leave for the city to make good. If I'm not a success, I'll come back and shoot myself.”  “Splendid. I'll lend you my revolver.”
The story to this Buster Keaton short film, Daydreams, is simple.
A Young Man (Keaton) asks for The Girl’s (Renée Adorée) hand in marriage. The father asks how he will support his daughter. The Young Man does not know but he is willing to go to the city to find a job to make money. If he does not succeed, he tells the father, he will kill himself.
The Young Man goes through several jobs. He writes to The Girl that he is working in a hospital and performs several surgeries a day. He is really working at an animal hospital. He has to leave after he mistakes a skunk for a cat. The next job he has he writes to The Girl that he is cleaning up on Wall Street. He’s cleaning up alright but it is not money. He is a street cleaner on Wall Street. Of course this job goes bust. His garbage bin has a hole in the bottom so none of the dirt gets cleaned off the street. He gets out a hose to clean the dirt and it is too powerful. The water hits a parade that is going by. Next his writes home that he is going to use his artistic side to become an actor. He is an extra who totally bombs just being a Roman soldier who has to march in place in the background. He leaves the theater still in his costume. A police officer sees him and chases after him because his clothes are not appropriate. The Young Man evades the police for a bit outside a second hand store. He changes his clothes to the ones on sale but does not have the money. That is until he reaches into the pocket the pants and finds a wad of money. When he walks away the pant are too big and he loses them. His last note home to The Girl is that his performance was not too good and now he has to be followed around by the police. He has caused so much trouble with his shenanigans that the entire police force in the city is after him.

The Young Man manages to make it back to The Girl by have the mail truck deliver him. Of course he was not successful so the father gets out his revolver. The Young Man misses and misses again and again.


Daydreams was alright. It is not as funny or entertaining as some of Buster Keaton’s other films but it did manage to give me a good chuckle every now and then. I pretty much watched it for Renée Adorée. I like her very much so, as with any actress/actor I like enjoy, I try to watch as many of her films as I can find. She was not in it for the most part and she really did not have too much to do. Still it was great to see Adorée in a film. Keaton was of course adorable and great with his comedy. Daydreams is only twenty-one minutes long. Watch it if you like Buster Keaton, Renee Adorée or have the time for a short silent film. 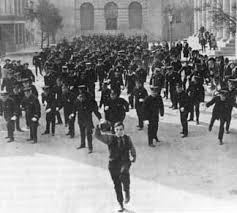 Posted by UneCinephile at 11:56 PM