Silent comedy films are genuinely funny. There is no feeling of the actor trying to be funny. They just were. In 1917 the movie industry was still young stories were still new and exciting. They were meant for audiences to come and watch and throw their everyday cares away. As much as I like dark and ridiculous humor that is most of the times vulgar I immensely enjoy early silent comedies because they are innocent. For however long the film is you suspend belief that a big oaf like Fatty Arbuckle could have a nice loving wife and a great big house with servant even if he is a bumbling drunken fool like he is in A Reckless Romeo.
The Husband (Arbuckle) comes stumbling into his house a drunken mess at three o’clock in the morning. His wife and mother-in-law are given a shocking wake up when they hear him downstairs. The Wife scolds The Husband for waking her up and tells him to go to bed. He hysterically takes off his clothes. He thinks his suspenders are snakes and beats them when they fall on the floor. The butler has gotten a both started. The Husband gets in the bath in his pajamas and falls asleep.
In the morning The Husband apologizes to The Wife and the mother-in-law. He takes his wife and mother-in-law to Palisades Amusement Park for a fun day on the rides and play the games. The Wife and the mother-in-law go into a building where there are babies in incubators (which was considered an attraction). Instead of waiting nicely for them The Husband gets distracted by a pretty girl. He begins to try to flirt with her and then her boyfriend comes over. The two men get into a knock out drag down fight rolling around on the grass and funnily try to outwit each other. As they are fighting a cinematographer looking for background shots to film sees the men fighting. He films it since he finds the whole fight entertaining. The Husband, even though he is large and his opponent much smaller in weight, loses the fight. His eye is purple and his clothes are a disaster. 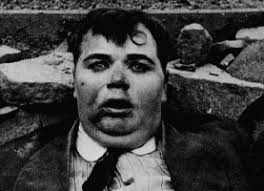 The Wife and the mother-in-law, not being able to find The Husband, go back home. He returns home sometime later bruised eye and all. When asked what happened to him he tells a lie that while he was walking home he stopped a blind man from being robbed by fighting off a group of thugs and also a police officer.
That night The Wife, The Husband, and the mother-in-law go to a theater. The girl from the amusement park is there and so is her boyfriend. A film clip comes up. It just so happens to be the clip of The Husband and the boyfriend’s fight from that afternoon. Everyone is laughing. The Wife does not even seem to notice that her husband is the one being laughed at on the screen. He tries to get up so she will not get mad at him and also because the boyfriend has spotted him but The Wife will not let him go. Eventually The Husband is chased out of the theater by the boyfriend.
I got to see A Reckless Romeo this past week as part of a program for an exhibition called A Celluloid Story: New Jersey’s Filmmaking History. This exhibition is currently on display at the Walsh Gallery on the campus of Seton Hall University in South Orange, NJ. It was created by two of my fellow classmates in the Museum Professions Program. They helped me to get my internship at the Fort LeeMuseum in Fort Lee, NJ over the summer. As part of my internship I helped my friends find objects for their exhibition. A Reckless Romeo was played after a lecture on New Jersey’s film history by film historian Richard Koszarski who is a specialist on silent films made in the state.
For those of you who may not know, Fort Lee was where the movie industry really began. Fatty Arbuckle was one of several famous silent film stars who made their pictures in the studios of Fort Lee including A Reckless Romeo. It was amazing to see Palisades Amusement Park in the early 1900s (pop quiz: the Schenk brothers ran Palisades Amusement Park. They would eventually run the business end of MGM). Even more amazing was the scene where The Husband tells his wife that he was beat up. In that scene there is a stone wall where I believe a monastery used to be. Every weekend when I did my internship I would drive past that wall. The monastery is long gone replaced by high rise apartments but the wall is still there. It was incredible to see how quite that stretch of road once was. Now it is a congested nightmare since the George Washington Bridge is literally straight ahead.
A Reckless Romeo was hysterical. It was so funny to see this big guy bumbling around all over the place and being cheeky trying to flirt with a girl. That what Fatty Arbuckle was in this film, he was cheeky. I enjoyed the film more because I was watching it with people who do not watch films like I do they are not versed in classic films like I am and they were laughing. The laughs were so genuine you could hear they found it funny. The laughs were not awkward because the comedy was not awkward. Like I said the comedy is innocent. If you can find A Reckless Romeo please take the time to watch it. It will make you wish comedies today could be made like this.


If you live in New Jersey and have a chance before the exhibit closes on December 12 please go check out A Celluloid Story: The History of Filmmaking in New Jersey at the Walsh Gallery at Seton Hall University. I had a lot of fun helping my friends out and they did a fantastic job displaying the objects (which include original posters, fan memorabilia, film props, and even a piece of an old studio).
Another friend of mine her boyfriend and his friend created an original score to play along with the film screening.