“You called about your neighbors?”

I was not the type of person to go out and party and still not. I am sure you can tell just by looking at how many posts I have done in the past few years on this blog.  The whole staying out late and getting so shit faced all you can see is blurry lines is not my idea of having a good time. I know a lot of people who like to party and have a good time. I can remember telling myself before I went away to school that I would open up and go out and party to meet people. I did go out twice because my roommate/friend was like that. At one time during our three years rooming together she was dating a frat boy. Well, technically he was not a frat boy because the frat he belonged to got kicked off campus for something totally stupid his past frat brothers did at a parade. But anyway, the frat had a house way off campus. It was an old house that was falling apart. It was so old that it had a tunnel leading under the basement to somewhere in the mountains in New Jersey because it was once part of the Underground Railroad. It was so big that at one point in its history the front portion of the house had been a doctor’s office. All the equipment was gone but you could totally tell it had been a medical office at some point. I did go to the house a few times. I was bored out of my mind. I am not the flirty type and I kept getting hit on by one of the guys all the time. If it had been a better guy with a goal in his life besides partying and looked like he had taken care of himself then I would have given him the time of day.
Sometimes I feel like an old fart. All I want to do most of the time is come home from work and watch something on Netflix. On the weekends I love staying in my sweats and marathoning movies and working on this blog. Yes I know what a thrilling life I lead. I also have a degree in Art History and my ideal date is going to a museum and I can talk your ear off about the brilliance of Orphan Black all day long. If you are looking for a good time I am the right person to have a good time with ** I say sarcastically**. Eh whatever I am happy with myself and if I was looking to do something fun I would go looking for it.
I am not big on movies that have to do with frat houses. Well I will say Animal House is hysterical and one of the greatest comedies ever. Then it was just all about sex and drinking and partying. Maybe they are still like that today but there is just something about the frat movies that are made today that just suck. So, why you may be asking yourself, did I even bother to watch Neighbors. I will tell you it is because of the cast and I must say I found it funny and very entertaining.
Mac and Kelly Radner (Seth Rogan and Rose Byrne) are a young couple with a new baby. They have just bought their dream house in a nice quiet neighborhood. A house next door to them has just been put up for sale. They see a nice gay couple looking at the house and are excited to see a couple with a baby like theirs possibly moving in. A few days later they see a moving van pull up in the front of the next door house. It is not the gay couple moving in. It is literally a nightmare for all parents. The truck opens a load of frat boys and sorority girls swarm around it and start moving stuff out.
Mac and Kelly are immediately worried about all the noise the frat will be creating that will be keeping their baby up all night. They do not want to get on the wrong side of the boys so they try to act really cool and just ask if they can keep their partying down. Kelly and Mac speak to Teddy (Zac Efron) and Pete (Dave Franco) the president and vice president of the frat. The guys seems nice enough with Teddy telling them to call and talk to him if they are ever being too loud. That night Teddy and the frat throw a party. Kelly and Mac go to the party and wind up having a good time. 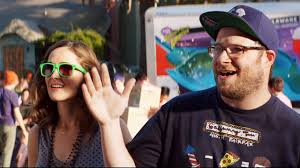 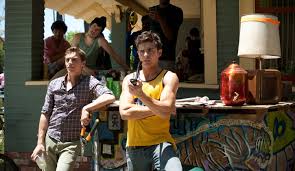 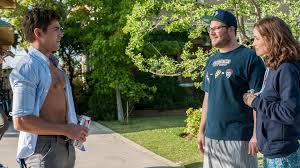 A few parties later Mac and Kelly do not like all the partying going on anymore. They are kept up all night with their daughter crying. Mac calls the police but the police officer makes it worse by pointing out to Teddy that they called. Soon Teddy and Pete and Kelly and Mac are in a war with each other. They sabotage each other in certain ways off and on. It is a battle of the young vs. the “old” throughout the rest of the movie. 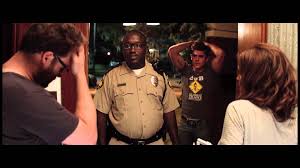 I absolutely loved the cast. I cannot lie I mainly watched it for Rose Byrne. Byrne is one of my girl crushes. I adore her as an actress because she has played so many different roles and has been fantastic at all of them. I was dying laughing with her in this movie she was hysterical. I loved hearing her Australian accent to me it made her character funnier. Byrne paired with Seth Rogan was awesome they looked good together and had great chemistry. Rogan was hilarious he was not over the top like he can get in some of his movies he was perfect. Zac Efron was very good. The guy is just so much fun to stare at. I am going to pull my girl card and say I was mush when he came on the screen he is just so damn hot. Dave Franco is not that great of an actor (I am in no way comparing him to his brother this is just a general observation) but he is a piece of eye candy. A lot of comedic actors show up in the movie: in a flashback scene Andy Samberg is one of the founding members of the frat, the guys from the show Workaholics are supposed to be the ones who invented Beer Pong, Jack Johnson is also in a flashback scene but I cannot remember exactly what he did, Lisa Kudrow is the dean of the school.


I had a great time watching Neighbors. It is definitely not one of the greatest comedies ever but it was a good time. Sometimes in life I need a stupid movie and this was one of them. The cast was great I was not disappointed with them whatsoever. It definitely made me hate frats even more. Maybe I am getting “old” like Kelly and Mac! I would definitely be like them I would be the crotchety “old” person telling those young bastards to turn down their music and stop throwing shit on my lawn!  Partying is just so not me especially nowadays there is no way you could get me in a place full of people under twenty-five (holy shit I just made myself look old. I will be twenty-seven in a few weeks!). Neighbors was a fun movie. There were a lot of lines and scenes I was laughing really hard with. Watch Neighbors if you are looking for something silly with some great eye candy.