“Smart, aren't you?”
“No, not really. I've just had time to think things out. Put myself in your position. That's why I know you're going to agree.”

One of the many reasons I like Hitchcock’s films is because he always knew how to put together a great cast and he always had characters good or bad or sometimes both that the audience could sympathize with. Dial M For Murder is one of Hitchcock’s perfect films from the story and direction to lighting and casting.
Tony Wendice (Ray Milland) is an ex-pro tennis player. He and his wife Margot (Grace Kelly) live in a small apartment in London. When we are first introduced to the couple they are happily sitting down to breakfast seeming to be the 1950s example of the perfect couple. Later that night we see all is not perfect with the couple as Margot is now in the arms of another man named Mark Halliday (Robert Cummings). Margot had met Mark the previous year when their affair first started. Mark is a mystery writer living in America so he and Margot correspond through letters. Margot is upset her purse had been stolen at a train station a few months previously along with a letter from Mark. The purse was recovered at a lost and found but the letter was gone. Ever since then she has received two blackmail letters to pay her otherwise they will show her husband the letter. Margot paid them but nothing has happened she has not gotten the letter back. Tony comes home and decides not to go out to the theater with them saying he has a lot of work to do. 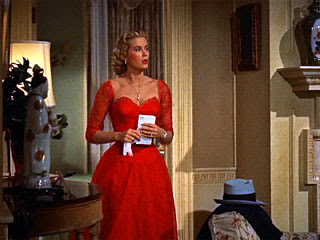 After Mark and Margot leave Tony phones a garage owner saying that he wants to speak to him in person about a car that is for sale. Before the man comes over Tony sets things up around the apartment suspiciously. Now as the audience we know that something hinky is going on. When the man named C.A. Swan comes over Tony sweet talks him a little and after a few minutes he lets Swan know that he has been following him and knows all his shady dealings. Tony’s explains that he followed Swan to blackmail him into killing his wife. Tony has found out about Margot cheating on him with Mark and now wants to kill her and he plans the perfect murder.
The plan is set for the next night. While Tony is out with Mark at a party Swan is to come in and kill Margot when he hears the phone ring to bring his wife out of the bedroom. That night things do not go smoothly: Margot almost goes out, Tony’s watch stops, but the one thing that should have happened does not. When Swan attacks Margot she fights back and stabs Swan in the back killing him.
Now Tony is all nervous and he frames the whole accident to make it look like Margot purposely killed Swan. 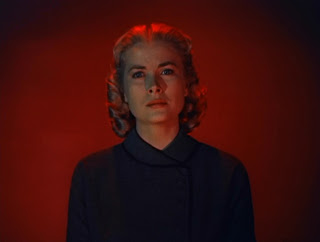 The cast of Ray Milland, Grace Kelly, Robert Cummings, and John Williams as the police detective was perfection. Milland was one of the best villains/antagonists in Hitchcock’s films. He just had that evil, malicious, jealous, slick look about him that made him such a great bad guy. I am not a huge Grace Kelly fan I find her to be more of an icon and a cliché more than a great classic actress. But I did find her to be very good as Margot. This was her first film for Hitchcock and she was one of the director’s favorite leading ladies. There is one scene of her when she is being prosecuted (in a sense of the word) and put on trial where she looks, to me, so unbelievably pretty. She really is not the heroine of the film the main heroes, if they can be called that, are Mark and the Inspector who save her. She definitely pays for her sins of cheating. Robert Cummings is very good as the other man who accidentally stumbles into the real happenings of the crime. John Williams adds a little comic/suspense relief as the sympathetic Inspector Hubbard. With the characters of Tony, Margot, and Mark we feel sympathetic towards them even though they are all in the morally wrong. Tony is upset that his gorgeous young wife is cheating on him. Margot is cheating but she is the victim who was almost killed and then arrested for a murder she is supposed to have planned. Mark loves Margot and does anything he can to get her out even going to Tony to confess his love for her. I love how in pretty much all of Hitchcock’s films we are made to feel sympathetic to characters no matter how much they do not deserve it.
Dial M For Murder is based off a stage play. Hitchcock excellently stayed true to the stage formula only moving out of the apartment set three times. He knew that the dialogue was the most important aspect of the story so he focuses more on the actors and the telling of their stories and ideas. His amazing camera work and use of colors and visual imagery keeps the one roomed setting from getting boring. To me the one roomed set and the claustrophobia it creates is what makes the film so suspenseful and tense.
My favorite scene of the whole film is one that everyone has either seen a picture of or has seen it somewhere: as Margot is being attacked by Swan she reaches back for some sort of help. It is one of my favorite shots from a film. There is so much desperation on both of the characters and Hitchcock excellently filmed that.  Just the entire scene where Margot is being attacked was filmed and acted perfection . Another scene that I could not get over the way it was filmed was when Margot is alone with Mark in the apartment. They hear Tony coming in the door, they have been holding each other and we see them let go of each other and walk away in shadow. It is a bit difficult to explain you would have to see it but I loved it I thought it was awesome.
Also as with all of Hitchcock’s films the score is top notch in helping to create suspense and drama. Famed composer and conductor Dimitri Tiomkin created a haunting, atmospheric score.
Dial M For Murder is one of the Master of Suspense’s best films. Unfortunately this film often gets overlooked most likely due to the fact that Rear Window came out the same year and the actors besides Grace Kelly are not typical or recurring to Hitchcock films. I think this is one of his best casted films and one of his best all round films. It is one of the director’s most simple which is a nice break from all his chaotic films where the characters are all over the place.
Dial M For Murder is a Hitchcock film not to be overlooked. Posted by UneCinephile at 10:40 AM