“We've decided she's our dream girl just from that picture.”
We all have our dream guy or girl we first create in our mind from magazines, movies, TV shows or maybe just like in the case of Dr. Richard Wanley (Edward G. Robinson) in the film The Woman in the Window a picture in a shop window. This greatly entertaining Noir thriller tells the story of a man in his middle age fantasizing about a younger woman.
Richard is a psychology professor whose family has gone away for the weekend without him. He and his two friends meet at a gentleman’s club every night for dinner and to unwind. Next to the club is a shop with a painting of a gorgeous woman. The three men agree in some ways that the woman is their dream girl. They discuss how they could never attract someone like that in their middle age.
That night as Richard is walking home he stops in front of the shop window to stare at the painting. As he is looking at the painting he sees a reflection in the window. He thinks he is dreaming the woman reflected in the window is the woman (Joan Bennett) in the painting. When Richard turns around his dream woman is smiling back at him. She tells Richard that she comes by the painting when she is lonely and to see men’s reactions when they see her in person. 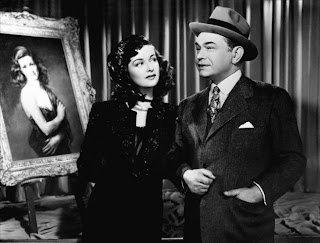 They go out for drinks to a nightclub then walk back to her place and share a few more drinks. Out of nowhere a boyfriend of hers come tearing in, smacks her in the face knocking her to the ground, and runs to Richard and chokes him. Richard reaches his arm out for help and the woman comes over with a pair of scissors. Richard stabs the man killing him. He goes to call the police but he figures they do not know each other the whole murder can be cleaned up with no connection to either one of them. Richard suggests they move the body to somewhere in country. They have everything planned out. The woman tells him her name is Alice Reed just so that he knows her name but she does not know his and just so they see each other again he leaves his vest at her place. From the moment Richard and Alice decide to move the body out their plan starts to fall apart through a series of mistakes and evidence left behind. To top Richard’s feelings of paranoia and fear his one friend Frank Lalor is the District Attorney on the case of the man he murdered.
The film moves along fantastically. But I will warn you about the ending: I liked it and saw it fit alright and it was a good twist, depending on where you read reviews not many people liked it. I will leave it up to you to decide.
At times especially with the aspect of Richard and his friends thinking the painting of Alice as their dream girl reminded me too much of Laura. Richard was staring at the painting and falling in love with a women he may never know and so did Mark in Laura and they both met the woman they fantasized about eventually. Laura to me story wise and acting and direction wise is ten times better. Both films were released in November 1944.

The acting is nothing really to write home about. Edward G. Robinson is not an awful actor but to me he was definitely not one of the best. The only other time I have seen Joan Bennett in a film was Little Women from 1933 when she was blond. The other day I was watching something about thrillers and suspense films and in one segment the program talked about how she changed from being a blond who was delicate to a brunette who was the femme fatale. By Noir standards Bennett was a perfect Noir femme fatale one that a man dreamed about and went home with and covered up a murder for. She was beautiful there is not one bad shot of her throughout the whole film.
Fritz Lang one of the masters of the thriller/suspense genre directed the film. I have yet to see Lang’s great films of the thirties which are considered his greatest but if this film is any indication of the style and the psychology of his other films, I cannot wait to see them.
The Woman in the Window is a great Noir/thriller/suspense film. The great genius in the way the suspense comes from Richard and Alice making so many great mistakes out of fear and nervousness. The story is very good of a man dreaming of being with a younger woman but his dreams falling apart the more he tries to cover up the murder.
Currently available on Youtube to view. Posted by UneCinephile at 2:03 PM