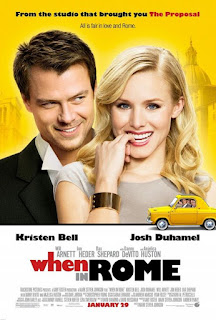 “You could get your heart broken or... you could have the greatest love affair the world has ever known. But you're never gonna know unless you try”
I do not like chick flicks at all anymore. They are outrageously predictable and unbelievable. I know they are made to be fun and fantastical but still they annoy me and do not offer me an escape… if anything they offer annoyance and sometimes a fantasy of love and romance that will never come true. The only reason I even sat through When in Rome and own it is because Kristen Bell and Josh Duhamel are the stars.
Beth (Bell) is a curator in the Guggenheim in NYC. She has a busy schedule which leaves her no time for romance. Her ex-boyfriend broke up with her and is engaged to another woman. To top things off her sister is marrying an Italian man named Umberto she only met two weeks prior. Her sister’s wedding in Rome cannot come at a worse time as Beth is putting together a new exhibit for the museum and her boss is being a bitch about it.
Throughout her visit to Rome, Beth is trying to keep in touch with the museum but it is not working out too well. At the wedding is Umberto’s roommate and best man Nick (Duhamel). At first Beth is not too crazy about Nick he seems arrogant and full of himself but as the night goes on she starts to fall for him. When she goes to bring a bottle of champagne outside for them to drink together she sees Nick with another girl (who is Umberto’s sister and there was nothing going on between them) and gets upset. In front of the church is a fountain called The Fountain of Love where people through their coins in and hope that Venus will help them find love. Beth takes three coins and a poker chip out of the fountain. Unfortunately each coin belongs to some creepy man and when she took out the coins and chip the men fall in love with her. Now to add to Beth’s stress she has a weird model guy (Dax Shepherd), a bald rich older man (Danny DeVito), and a magician (Jon Heder) following her and professing their love. Nick is also wooing her but she thinks it is because it his poker chip she has. She really likes Nick but she does not find it fair he believes he has no will.
Well not-so-spoiler-alert Beth finds out Nick really loves her, the chip was not his, and they truly fall in love and marry each other. THE END
I have nothing but serious love for Kristen Bell and Josh Duhamel I am so upset that they were in a movie like this. Kristen Bell is such a good actress, she was very good she always gives a great performance no matter what she is in but I did not like her in this I felt it was a waste of her talent. Josh Duhamel is a good actor not the best just good. His character was cute if a little silly at times.
Maybe I am not a fan because I am a little jealous that Kristen Bell’s character was supposed to be a curator at the Guggenheim. I am studying Art History and Museum Education so I can work at a museum. I would die to work in the Metropolitan Museum in NYC or any museum anywhere for that matter. It is so hard to find a position in a museum anywhere let along one in NYC. If we go by Bell’s real age for her character Beth would be thirty years old she would have spent four years in college (if she went to a four year school and did not transfer and did not spend an extra year as an undergrad… like me) then she would have had to have spent two year in grad school for a Master’s degree because you cannot even think to apply for a museum job without a Master’s in Museum Studies so she would be about twenty-five to twenty-six years old when she was finished with school. Usually curator’s and anyone in the museum world starts out in a small museum almost never in a large and very well known museum. Also no one ever leaves their post until they literally cannot work anymore or they die (that has happened I read about it in a book on the Met). So chick flick fantasy numero uno right here: Beth at thirty years old being a curator at the Guggenheim. I am not denying that something like this could happen it is just very rare. When in Rome has its cute moments but like all chick flicks it is predictable and unbelievable. Watch it if you really like chick flick movies or if you are a diehard fan of either Kristen Bell or Josh Duhamel. Posted by UneCinephile at 3:57 PM