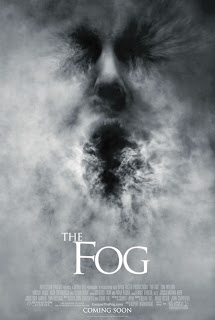 “So now you know”
“That our forefathers murdered every man, woman and child on the Elizabeth Dane? And this town was built on nothing but lies?”
“And now they've come for revenge.”
I have yet to see John Carpenter’s The Fog so do not mind me for my movie ignorance for having seen this 2005 version first. I was seventeen when I went to see this and I did not know what good movies were yet… and at the time I was madly in love with Tom Welling.
Basically the story is about people living on an island off of Oregon called Antonio Island and they are attacked by killer fog. The fog is the ghosts of passengers from a ship that was sunk in the middle 1800s by the founding fathers of the island. The four men took the money and sunk the ship carrying lepers by setting it on fire. Now the ghosts are out for revenge killing all the descendants of the founding fathers. Tom Welling’s character Nick Castle and Maggie Grace’s (Lost fans will know her as Shannon) character Elizabeth are two of the descendants.
As the characters are finding out more of what is going on Elizabeth discovers that her dreams of drowning and being on an old ship were memories from her past life where she was married to the ship’s captain. The fog and ghost attacks end when the ghost of the ship captain finds Elizabeth and takes her back to wherever he came from with him.

I think this remake had a lot of potential because the story was interesting but the acting was not there at all and the whole thing just seemed blah. Well, let’s face it Tom Welling and Maggie Grace are not the greatest actors ever. The only actor that really held up was Selma Blair and her character was the only one who was semi-interesting.
The whole remake of The Fog was definitely geared towards people of my age and MTV viewers at the time. It felt like it as trying to be a cool, hip film appealing to a new mass of horror fans. I will give it credit with the historical aspect because I like that stuff and I mentioned that in my review of the Amityville Horror remake. I was left really looking forward to watching the original The Fog by John Carpenter and now I cannot wait to see it. This remake although not completely terrible is one of the reasons why movies should be left alone and not be remade.
Posted by UneCinephile at 8:39 PM