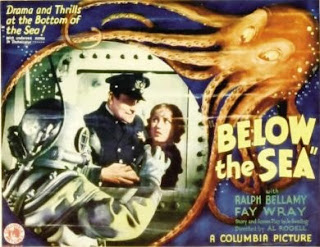 After World War I, the movie industry hundreds of films from the silent era right up to the Second World War about the Germans being horrible miserable spies and the impact of such a large war and damaging war. Some films came out fantastic (such as The Big Parade) some films just tried to too hard.  Below the Sea is one of those films that just tried too hard.
The film begins in 1917 during World War I. A German submarine and its crew have chests filled with gold bars on board. The submarine is destroyed by an enemy torpedo. Only the captain Von Boulton and one crew member survive. Von Boulton and the man swim to shore. The man pulls out a map that he had drawn of the submarine’s coordinates. Von Boulton pushes the man over the edge of the mountain so he can have the map and the gold all to himself.
Years later Von Boulton is now going as Captian Schlemmer. He has been living in a port town. He wants a diver/ recoverer named Steve McCreary (Ralph Bellamy) to help him obtain the gold since Steve has all the equipment. Schlemmer has no intentions of splitting the gold with Steve he plans on getting rid of Steve and make it look like an accident. The ship they are on gets caught in a storm. Steve is furious with Sclemmer because he is supposed to be captain and he is not on deck. Schlemmer refuses to give up the coordinates to the submarine. The ship goes down and Schlemmer and Steve are the only ones to survive. One night when Schlemmer is passed out, Steve finds the map. When the German wakes up to find half his map is missing Steve tells him they are partners now they split everything 50/50.

A young rich woman named Diana Templeton (Fay Wray) is sponsoring a voyage to the submarine. Steve is not crazy about Diana at first. She tries to make him smile, he eventually does after he kisses her. He tells her he only did it because he was expecting her to stop. Diana is determined to go down in the water. Steve will not let her go down in suit. To spite him Diana goes down in a diving bell. The next day she goes down in the suit. Steve is angry at her so teach her a lesson he messes with Diana’s air supply. Diana almost dies. The whole crew blames Steve for trying to kill Diana. He says she is the one who should be apologizing because he told her not to go down in the suit.
Steve goes down to the submarine. Schlemmer’s girlfriend Lilly snuck aboard the ship. She help Schlemmer drug so he could not get to the gold. Schlemmer goes down to the submarine while Steve is knocked out on the ship. Meanwhile, Diana and her photographer go down in the diving bell to take photographs and some film footage. A giant squid attacks the diving bell. The crew tries to bring up the diving bell but the squid keeps pulling it down. The large sea creature pulls so hard it severs the diving bell from its chain and also its air supply. Steven manages to defeat the squid and gets the diving bell to the ship.
And honestly this is the end of the film. If you are wondering what happened to the main story Steve tells everyone that Schlemmer will never find his gold. The gold is buried under tons of mud.
This was the first film I have ever seen Ralph Bellamy play a character that was rough and tough. I am so used to seeing him in his later films as that aw shucks guy who loses the girl to Cary Grant. I think Bellamy became more attractive and awesome as this rough and tumble character! Fay Wray was not bad at all. Her character was almost unnecessary but she did a good job with the material.
Below the Sea starts off interesting but then the romance angle just completely takes over and ruins it. Once Diana starts wanting to go down in the diving bell the story gets away from its original plot. The whole main story with Schlemmer wanting to get to the gold just disappears. As I said in the beginning of the post this film just tries too hard to make the Germans look bad and greedy and then just drops that entire angle.  The story is unfinished and leaves you asking what the hell happened to Schlemmer. Below the Sea is worth watching once. TCM aired the film try to catch it if the station airs it again.
Posted by UneCinephile at 9:23 PM