The Millerson Case is one film in a series called “Crime Doctor.” No worries about not having seen the other films before this you will be able to follow the character of Dr. Robert Ordway and the rest of the characters.
Dr. Robert Ordway (Warner Baxter) works in New York City. He is going on vacation to the country in Brook Falls, Virginia. He guide in the small town brings him to the home of Sam Millerson who is the local doctor. The guide tells Robert that in town offer suffer from what the doctor calls “summer complaints” and they die pretty quickly. Robert asks Mrs. Millerson of the doctor ever made a bacteria sample of the water or milk in the area. The wife has no idea what he is talking about which means that Sam never did any such thing.
The state health office comes to town. They have to quarantine the town since the ones who have been sick are suffering from Typhoid Fever. The locals are not at all happy with state officials coming into their town and disrupting their lives. Dr. Millerson thinks the city clinic is trying to force him out of his practice. He has been telling his patience not to get their vaccination shots. The doctor does not understand how sick everyone can get if they do not get their shots.
Since Robert came to town there are have been three deaths. He takes a look at the samples collected from the victims. Two of the people died from Typhoid fever. One of the state doctors did an autopsy on the third victim Ward Beachey and found that the man’s stomach looked like it had been corroded by poison. They think Millerson is the murderer out of revenge because Beachey went to the county clinic the month before. Robert and the police find out that Millerson bought a large amount of poison. Millerson says he bought the poison to treat boils. While standing in the school house talking the clinic doctor is shot. The rifle is traced back to being Robert’s. When he goes to the Millerson house he finds his rifle is missing. Later on when he returns to his room his rifle is right where he had left it before it went missing. 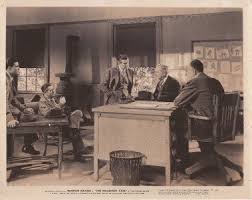 Robert begins to stand up for Dr. Millerson because everyone is convinced he is the killer when there is no hard evidence to link him to it. Robert and the detective on the case find out that Beachey fooled around with other women. Through a man named Judd, Robert finds out that Beachey was meeting with his (Judd’s) wife. The wife asks Robert how he found out about her messing around with Beachey. He tells her it was from another woman and thus pits the two women against each other which later leads the women to a huge cat fight in the middle of the town.
At the county fair Dr. Millerson is given a note to meet someone out in the woods. When he arrives at the spot he is shot down. Robert figures the doctor knew something that was dangerous to someone. Robert comes to figure out that a local farmer is somehow involved with the murders and makes the man a suspect. The farmer had his daughter write the letter to lure Dr. Millerson out into the woods. He killed Beachey with the poison he uses on his farm because Beachey was breaking up his home. The farmer had to get rid of Dr. Millerson because he had asked the doctor someone time before how much poison it would take to kill a man. Robert gets into a brawl with the farmer and is almost killed. Luckily the police come in time.
Warner Baxter was very good as Dr. Robert Ordway. He starred in the other Crime Doctor films that I have yet to find and watch. I liked seeing him as this crime solving doctor. He was calm and level headed and he was not condescending to the simple minded rural town folks.


The Millerson Case was a good film. The story, I thought, was different from your run-of-the- mill crime films from the late forties. There were several people who could have been the murderer and it turned out to be someone that was not front and center or seen too much in the film. The Millerson Case is not available on DVD or on Youtube. If TCM airs the film again give it a try.
Posted by UneCinephile at 11:27 PM