“If we don't make it through this, I forgive you for whatever happened between you and Lt. Sobinsky... but if we do, you're in a lot of trouble!”

This version of To Be or Not to Be follows the same lines as the original with Carole Lombard and Jack Benny from 1940. Of course this being a Mel Brooks movie it is ten times sillier and crazy.
Everything is pretty much the same as the original except Mel Brooks plays Fredrick Bronski instead of Josef Tura and Anne Bancroft plays Anna Bronski instead of Maria Tura. Fredrick is the “world famous actor in Poland.” Both actor and actress have egos too big for their head. Anna has an admirer in the audience named Lt. Andre Sobinski (Tim Matheson). She tells her male dresser Sasha to have him come back as Fredrick does his Hamlet scene. As soon as Fredrick starts Andre gets up. Fredrick is insulted and horrified that someone would dare get up in the middle of his scene but at the same time he gives one of his best performances.
Andre just gushes over Anna when he meets her. He tells her how he enjoys flying planes. Of course it is a sexual joke and both Anna and Sasha are on the edge of their seats listening. Anna wants him to come back the following night but Andre tells her he has been called away to fly to England. While in England a man named Professor Siletski (Jose Ferrer) asks the soldiers if they have anything they want to send to their loved ones since he is returning to Poland. Andre gives the message “To be or not to be” to Siletski to give to Anna.

That night Andre has parachuted into Poland to try to find Siletski before the professor can give a book of names to the Nazis. He finds Anna but is exhausted and she puts him in her bed.  Not long after she puts Andre to bed Anna is taken away by the Gestapo to see Siletski. The professor has turned against his people and is now working for the Nazis. He asks Anna what the message means if it is a coded message. She tells him it is a coded message from a young man and explains about Andre and her husband’s Hamlet scene. While Anna is away Fredrick comes back to find Andre in his bed. He says “to be or not to be” and Andre gets up in his sleep. 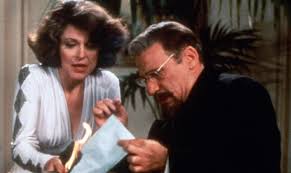 Andre. Anna, Fredrick, and the theater troupe are able to hilariously fool the Nazis and escape to England. 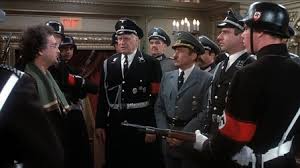 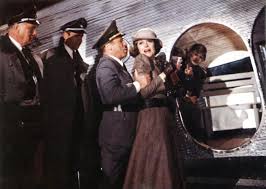 I cannot even begin to say how much I adore Mel Brooks and Anne Bancroft. I was just in awe of Bancroft she was such an amazing actress. I loved how with some of her lines she said them as if she was actually the character and totally believed in them. Even in her fifties by this time Bancroft looked beautiful and stunning I could not take my eyes off of her whenever she was in a scene. Brooks was a panic as always. One of the things I admire about him is how he made fun of the Jews so much and so mercilessly and he was Jewish himself. He did it tastefully though he never went over the top. Brooks and Bancroft were completely opposite from one another but they made an absolutely adorable couple. You can see right from the beginning how much they loved each other. This was the best story for the two of them to do together. I can imagine Jack Benny and Carole Lombard being happy with Mel Brooks and Anne Bancroft recreating their famous movie roles.


This version of To Be or Not to Be is much different from the original. Yes there are some scenes and lines that were verbatim from the original but they were all made and delivered in the style of their modern director and perfectly casted actors. It screams and shouts that it is a Mel Brooks film right from the beginning. Mel Brooks never remade films he always lovingly and tastefully parodied the films he loved himself. That is no different than with this movie, it is a tribute to one of the funniest classic comedy films ever made and a tribute to its fantastic director and starring actors. You will be laughing and having such a great time watching this movie. To Be or Not to Be needs to be seen by everyone who enjoys comedy films and Mel Brooks films.
Posted by UneCinephile at 10:47 PM