“The next sun shines bright and clear, but in the bosom of Mathias rages the storms of yesternight.”

A man named Mathias (Lionel Barrymore) owns an inn in his small French village in the mid-1800s. He has ambitions of becoming the local Burgomaster. Unfortunately he is having trouble repaying the loan on his tavern. To make sure he receives votes Mathias gives free drinks and credit to those who come in. He owes money to a man named Frantz who threatens to tell the entire town that Mathias has no money. Mathias also owns a mill and several other businesses. The workers at the mill need to be paid. They go to Mathias to ask for credit and he agrees which drives him further into debt.
Mathias and his wife Catherine have a daughter named Annette. Annette is in love with a gendarme (police officer) named Christian. Mathias always sacrifices things so his wife and daughter can have nice new things. He dresses shabbily and does not let on how in debt he is. Frantz comes to see Mathias with the offer to marry Annette and all the debts will be forgiven. Mathias will not hear of such an idea. He tells Frantz that if Annette marries it is to someone that she loves.
A fair comes into town. Mathias sees a mesmerist who claims that he can make a criminal confess and a good man tell of his good deeds. After seeing the mesmerist Mathias goes to a fortune teller. The teller is immediately distraught when she looks at his hand. She sees nothing but bad things in his future. Mathias is confused and upset by the reading he cannot think of what could possibly happen to him that will be so bad. 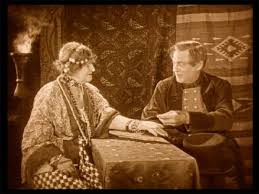 On Christmas a Polish man named Baruch comes to the inn. Baruch sits down with Mathias for a drink. They are all alone. When Baruch goes to leave he pays Mathias with a gold coin. Mathias asks the traveler if he is carrying all gold coins and the man replies that he is. On his way out Baruch tells him “Peace be with you.” Mathias follows the man’s sleigh out into the woods and kills him for the gold.
Mathias is able to pay Frantz off and keep a great amount of money for himself. He gives the story that an uncle of his died and left him all the money. Christian comes in to tell everyone that a sleigh and a glove have been found in the woods and that they are looking for the missing man. Christian later asks Mathias for Annette’s hand in marriage. Mathias agrees and promises to give Annette a dowry of thirty thousand Francs. As Mathias counts the money he thinks he sees the blood of Baruch on his hands and he cannot clean it off. When he turns around he sees an apparition of Baruch and hears the bells from the sleigh.
Mathias is eventually named Burgomaster of the town. On the day he is appointed a man named Jethro comes searching for his brother Baruch. He brings the Mesmerist along with him because he believes that the Mesmerist can make any man confess. Mathias orders both of them yelling that the Mesmerist does the work of the devil and he will not have any of that in his tavern. His first order as Burgomaster is the case of Baruch. Jethro comes to court again with the Mesmerist and once again Mathias has them both thrown out.
As time goes on Mathias becomes tortured ever more by his conscious. He keeps seeing Baruch. On the day of his daughter’s wedding he goes upstairs to count the money for the dowry. He dreams he is on trial for the murder with Frantz as the judge. Jethro and the Mesmerist are there. The Mesmerist gets Mathias to confess. He keeps hearing the bells constantly because of his guilt. Out of his dream Mathias is in the room with the ghost of Baruch next to him. Baruch tells Mathias “Peace be with you.”

The Bells was an interesting film. I liked the idea that Mathias had been a good man but pressure and want and need of money drove him to murder an innocent man. I also liked how Mathias felt his greatest threat was the Mesmerist. He did not want to admit that he believed the Mesmerist could get him to confess he was fighting himself on that belief and that as why he mostly felt so tortured. Lionel Barrymore did an excellent job in this film. He played the character of Mathias just right he did not once overact. The Bells is not a stand out silent film but it is good and is a silent film I suggest taking the time to
Posted by UneCinephile at 11:36 PM