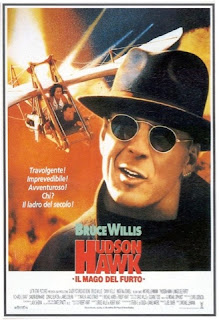 “If the Mario brothers weren't New Jersey's third-largest crime family, I'd say, "Kiss my ass." But considering your status, I will say, "Slurp my butt."”

I love movies or TV shows that have to deal with heists or con artists or better yet art thieves. I know they are all fake yet at the same time based on some truths but I just love how smart the thieves and con artists have to be. I have mentioned the show Leverage time and again and how I love the fact that they are con artists who are the good guys and that my favorite character, Parker, is the thief and loves to steal art and diamonds. My love for Leverage lead me to watch this web series called Caper (it was created by one of the producers of Leverage and the actress, Beth Riesgraf, who played Parker, is in the series). Caper has a really interesting concept: it is about superheroes who live in our world and are totally broke, living in a crappy apartment and barely making enough to eat. The broke ass superheroes include Penny Blue aka The Machine (think Tony Stark/Iron Man), Alexia (think Wonder Woman), Luke Washington aka The Boy Scout (think Superman), and Dagr (think Thor). They come up with a plan to break into the company that Penny used to work for. The only glitch for the actual people with superpowers- they cannot use their superpowers. Penny does not want people to get hurt. Some of their plan comes from watching the movie Hudson Hawk. I heard of Hudson Hawk before Caper and after hearing it mentioned I definitely had to see it especially since it had something to do with a heist of sort. I thought the movie was going to be serious, I could not have been more wrong.
A cat burglar known as Hudson Hawk (Bruce) has been released from jail after serving ten years. On his way out a cop tries to bribe him into doing a job for someone. Hudson wants nothing to do with burglaring he just wants to go home, have a cappuccino, and maybe do some community service and find a decent respectable job. His friend Tommy picks him up and takes him to what used to be a local dive bar that has turned into a hipster hang out. At the former dive bar are the Mario Brothers (no kidding they are called the Mario Brothers), a group of gangsters. The oldest brother forces Hudson to take a job or he will wind up in jail with no way out. All Hudson has to do is steal a horse from an auction house.

The job seems simple enough. All Hudson and Tommy have to do is break in nice and quietly and no one will get hurt. Their plan starts off well. They put the security footage on loop and glide in kneeling on skateboards past the guards. The glitch in their plan is looping the security feed. A fat guard broke a chair in the main room and the guards in the office notice it. Hudson and Tommy make it out without getting caught. Hudson actually manages to crash in on the apartment where the deal for the horse is being made. The officer from the prison is killed and an English butler takes the horse from Hudson.
In the paper the following day Hudson and Tommy read that the horse was not stolen and is ready to be sold for a record price. Hudson’s pride is hurt he wants to check out the horse for himself so he goes to the auction. At the auction a wacky, really weird husband called the Mayflowers bid on the horse for an insane amount of money. To make a long, very odd story short, Hudson finds out a man he used to work for is also working for the Mayflowers. The guy literally knocks Hudson out then drugs and literally sends him to Italy. In Italy a plot to find some crystals hidden throughout some of Leonardo DaVinci’s works and make a gold invention of his work is uncovered by Hudson. The Vatican actually knows about the plot and they use Hudson to their advantage. I got a little confused after a while but I think my attention span may have started to wander. Sorry about my ADD getting in the way. I do not do well when I get bored.
Hudson Hawk was not what I expected. I thought it was going to be a somewhat serious movie and it turned out to be really, really silly and I felt a little all over the place. I understand completely that it was supposed to be a satire I like satires but I think it tried too hard to be a real mystery and also be a comedy at the same time. There were some moments that were truly very funny but for the most part is just was not that good. Caper has a good sense of humor and I can see why they mentioned Hudson Hawk. After watching the movie I can see where Caper got some of its quirks from. Hudson Hawk is good for if you are in the mood for something totally silly and not serious at all. Just do not set your expectations too high.

Definitely check out Caper. The concept is really good and totally different. The episodes are not long at all. They are all available on either Youtube or Hulu

Posted by UneCinephile at 11:20 PM