Would you ever want your ex-boyfriend or ex-girlfriend contacting you out of the blue after having not seen you in years to apologize for what went wrong in your relationship? I am a cold hearted bitch when it comes to handling men. I really have no patience and my last two boyfriends were annoying clinging babies. If they ever contacted me and asked to meet me again I just tell them to go take a hike. The relationships did not really mean anything anyway they did not even last that long.? But you are not me and maybe you have been in a meaningful relationship but it ended Or maybe the relationship was not even meaningful but it left an impression on you that it is one you will always remember it left some kind of impact on your life? In the movie Some Girl(s) a character simply listed as “The Man” goes back to talk to five past girlfriends to apologize for what happened in their relationship.
The first stop The Man makes is to his hometown of Seattle to see his first girlfriend Sam (Jennifer Morrison). Since she last saw The Man, Sam got married and has two kids. He tells her he wants to apologize for the way things ended. Their conversation goes over well until they take about the night of their prom. He had broken things off before the prom. Sam recently overheard his mother in a food store talking to a friend and the subject of proms came up. She heard his mother say that he went to a prom and had a great time. He wound up going with a girl from a different school. Sam is upset because they had dated for so long and that they had talked about becoming engaged. 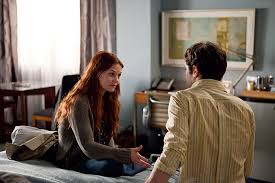 The Man next goes out to Chicago to see Tyler (Mia Maestro). Tyler is a wild girl who likes to have fun. As they talk he realizes that he plunged into a physical relationship with her because of how his relationship before her had ended. Tyler says she always felt like she was number two in his life. He would call someone and then hang up all the time. Over time Tyler says she did not feel like such a distant number two but still did not feel close to him.

After Tyler, The Man goes out to Boston to see Lindsay. When he was with Lindsay he had been teaching English at a college. Her husband had hired him. The Man and Lindsay had an affair and were caught. He ran away from the situation rather than face it then later wrote a book about it. Lindsay tells him what hurt the most was how when they would lay in bed he would tell her about the places they would go and how they would get away from the world. They were all things they could never really do. Lindsay makes like she wants to sleep with The Man. They take off their clothes down to their underwear. She has him close his eyes and think of the last time they were together. As he reminisces Lindsay walks out of the room.

Next The Man goes back home (at least I think he goes back home I cannot remember) to see his friend’s sister Reggie. He is someone she will never forget. Reggie tells him how she used to follow him and her sister sometimes and there is not one detail about him she cannot forget. The one unfortunate memory she will never be able to forget about him is the time he sexually assaulted her when she was twelve. Somehow The Man cannot even remember doing anything to her and profusely apologizes to her.
The Man’s final stop is to Bobbi (Kristen Bell). Bobbi is the girl who got away. Apparently The Man did something with her twin sister Billie and that did not go over well. Bobbi cannot understand why he just took off and left for Chicago and never called her. He tells her about all the times he tried to call and he just hung up. Bobbi points out that the whole reason he is meeting with his ex-girlfriends is to make sure he is not missing out on anything with them before he gets married. He tells her that she was the one who got away and he regrets it. His fiancé looks like her and is even studying to be a nurse like she is. Bobbi tries to leave but The Man holds her down. She rips his shirt to try to get him off of her and she sees he is wearing a wire. He is recording their conversation so he can get material for his book. After that incident he pours his soul out to her that he loves her and that he is sorry. Bobbi tells him that he is late for everything now. 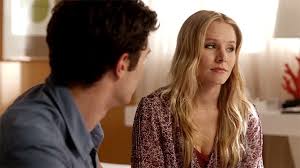 Some Girl(s) was alright. There were a lot of unexplained things and I did not like how The Man forgot details in his life. I do not mind ambiguous characters where things have to be left up to your imagination but that ambiguity did not work here. Too much about him and some of the girls and why he ran away needed to be explained and they were not. And it was never explained why he was really, truly going through this whole process. Maybe he was getting material for a book or he was weird and just thought he needed to see his old girlfriends before he got married to clear his conscience. I only watched this movie for Kristen Bell with the added bonus of Mia Maestro (love her from Alias) and Jennifer Morrison (currently very into Once Upon a Time). All three of them were very good. Actually all the actors did well with the dialogue and what very little story and background they were given to work with. Some Girl(s) is not a movie I highly suggest seeing. Only watch if you are a fan of any of the actors otherwise skip
Posted by UneCinephile at 10:04 PM