I love stories that have to do with espionage. It all started with the TV show Alias back in the day. Since then I have seen most of the James Bond films and plenty of other spy films. I just love how this one person and their entire world work in secrecy. They have to become different characters all the time. Sometimes what they do is for the good of people. That is how it always seems in classic films to me anyway. In classic films that deal with espionage usually it is a man who works for his country or for the good of his people to overcome some bad guys. He is only thwarted in his plans by a woman who works for the bad guys. She seduces him and he gives up the plans. I just realized I have described the plot of Mata Hari with Greta Garbo and Ramon Navarro but that is how most classic spy stories seem to me. The Emperor’s Candlesticks from 1937 starts off cleverly enough and almost like Mata Hari but it is in no way strong like the previous film and definitely not as entertaining.
The film begins at a masquerade ball at an opera house. The Grand Duke Peter (Robert Young) is in attendance as Romeo. They go into an opera box on the lower level. Several girls come over to his box but he is looking for one girl in particular, his Juliet (Maureen O’Sullivan). She comes into the box but is quickly ushered out by Suroff who does not want anyone else in there with them for fear something might happen to Peter. With Suroff standing outside the door the girl comes back around and talks to Peter. He jumps down and they begin to dance. Soon she has the Grand Duke follow her to a house. Once inside Peter is taken prisoner.

Peter is brought before a group of men who want to ransom him for a man who is working for their freedom. The man is the father of Maria Orlich, Peter’s Juliet. They have written a letter as Peter to his father the Czar of Russia about the kidnapping and to release Orlich. The letter is then given to a man named Baron Stephen Wolensky (William Powell). The baron has fifteen days to get the letter to the Czar.
Countess Olga Mironova (Luise Rainer) is a young woman with multiple social connections throughout Vienna. She is told that Baron Wolensky is Polish Agent # 14, an agent who has been a problem for some time. Through a superior she is given the orders to stop Wolensky from delivering a letter to the Czar.
Someone Stephen knows shows him two candlesticks that were supposed to have belonged to Marie Antoinette. The story is that just before she was about to be sent to her death she wrote a letter to some relatives in Vienna and hid them in the candlestick in a secret compartment. Stephen hides the letter in one of them. Just as he is leaving the building Olga comes in. The same man shows her another candlestick just like the one he had shown Stephen. Olga tells the man she wants one to give to the queen. 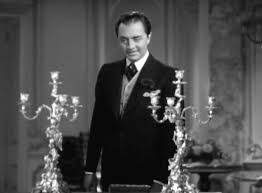 Stephen finds out that Olga is also a spy. He has his train car changed but he finds out that night that Olga had gotten on a train the day before. The candlesticks get switched out and stolen by Olga’s maid and the maid’s boyfriend. When his train stops at a station he sees a notice that Olga’s valuables have been stolen and that there is a reward for whoever stole them. He throws his stuff off of the moving train and looks for her. When he finds her Stephen tells Olga about the candlesticks how they have the same ones and that they mean a lot to him. She tells him about her maid taking all her belongings. Stephen offers to stay with her and protect her and whatever valuables she has left. Not long later the police come to tell Olga that they caught the boyfriend but he is not telling them where anything is. They do not realize that the maid knows where the candlesticks are. That night Stephen and Olga go out to dinner. They just talk until they get back to their hotel.
Stephen tracks down the maid. She does not say much but she gets an idea where the candlesticks could be. Olga sees Stephen leaving the hotel and has her carriage follow his. They find out from a pawnbroker that the candlesticks had been sold to someone in Paris. Stephen and Olga find the candlesticks at an auction house in Paris and purchase them together by pooling their cash together. They each take their candlesticks back to their own rooms. Stephen finds Olga’s note in the one he has taken. Olga comes to the room and reads the letter. She loves Peter she does not want anything to happen to him.
The men who have Peter want to do something with him. Maria tells them to wait until they hear from Stephen. The note setting Orlich free reaches the Czar.
Both Stephen and Olga are arrested and brought before the Czar. They should have both been killed but they saved Peter.
The Emperor’s Candlesticks was not a great film. The story was did not seem to be very well planned out. It seems like MGM just wanted to pair Luise Rainer and William Powell together again since they were in The Great Ziegfeld together the previous year. William Powell was great. The man was never bad if his character was bad it was the fault of the writers. He made the character of Stephen work as well as he could have. Rainer I think is a terrible actress. In the few films I have seen her in she drives me crazy. I tried to like her I wanted to like her but I could not. Maureen O’Sullivan and Robert Young did well in the few scenes they were in. Frank Morgan was a panic as the nervous, paranoid aid to the Grand Duke. The Emperor’s Candlesticks was not a good espionage film. It was definitely made to be more romantic not tense or even believable. There seemed to be some plot holes but that could be down to the fact that I got bored with the film barely half way through. I only suggest seeing The Emperor’s Candlesticks if you like any of the actors other than them skip it.
Posted by UneCinephile at 11:40 PM