Whenever I hear the phrase “money can’t buy happiness” I role my eyes and think whoever said that must have never had money issues. I believe money can buy a certain amount of happiness. If I had money of any kind besides the bare minimum wage I am making now I would be so stinking happy and have some of my bills paid off (college loans and credit cards are a nightmare). Then there are films with some kind of messages about how some people have all the money in the world and are not happy in the slightest. Those are depressing to some degree. The most depressing of its kind that I have seen so far has been the silent film Poor Little Rich Girl.
A little girl named Gwen (Mary Pickford) lives in a luxurious house with her parents. She has been given everything a little girl could possibly want in life. Despite all she has been given Gwen is not happy. Her mother and father brush her off for money and social acceptance. The servants in the house push her around and make her feel ungrateful and insignificant. The one thing in the world Gwen longs for the most is friends. She is so lonesome in the big house by herself all day.
At ten in the morning everyday she is brought into her own schoolroom in the house for private lessons. Gwen tells the teacher for her birthday she would like to go to public school. Right after lessons at four in the evening she goes for a car ride. Gwen does not like going for the ride she wants to walk to where they are going. The maid tries to scare her by saying if she does not go in the car she could be kidnapped or eaten by large dogs.

In her room, Gwen hears all the kids playing outside with an organ grinder. She has a boy and the organ grinder come into the house to play with her. A plumber is at the house. The plumber comes into the living room when he hears the music and he dances and plays along with everyone. Gwen’s fun is broken up when two servants hear the racket and her mother comes home with a friend. Gwen explains to her mother that she invited everyone in because she was lonely. The mother’s friend gets the idea to bring her daughter Susie-May over the following day. Gwen is beyond thrilled to have a friend come over but Susie-May turns out to be mean and no fun. Gwen pretends she is a bear and scares Susie-May. The other girl pinches her own arm and then runs to her mother crying that Gwen bit her. To get back at the lousy girl Gwen puts a plate of food under Susie-May making her sit on it. Gwen’s mother tells one of the servants to give Susie-May one of her daughter’s best dresses. Gwen does not want to give the nasty girl any of her best dresses so she throws some out the window and all over the floor of her room.
As punishment for throwing her clothes away, Gwen’s father forces her to wear a boy’s outfit. Gwen takes a long look in the mirror. She likes the way she looks in a boy’s outfit and likes it even more when she tucks her hair under a hat. Some boys from the neighborhood come into the backyard to get their baseball. Gwen, still dressed as a boy, goes down into the garden where the real boys are looking for their baseball. She goes up to them and before anyone knows it a fight breaks out. Gwen starts throwing mud at the boys. The fight is unfortunately broken up. Gwen is upset because she was having such a good time.

One night, Gwen hears a newspaper boy announce that the stock market has crashed. She knows her father deals with money and goes down to his office to talk to him. She sees him and asks him to just talk to her that is all she wants she is so lonely. Before her father can say anything a servant drags her out of the office and upstairs to bed. The father comes out of the office and watches his daughter being brought up the stairs. Gwen turns around and says she loves him. 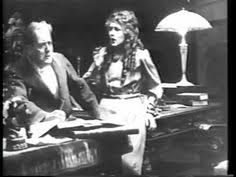 The parents hold a birthday party for Gwen. This party, unfortunately, is just a social gathering for the parents and their friends. Gwen is forced to go up to bed and be by herself with no friends. The maid and the butler want Gwen to go to sleep quickly they have plans to go to the theater so they give her some sleeping medicine. They wind up giving her too much. In a drowsy stupor Gwen leaves her bed and manages to get to the stairs only to fall. The plumber is back at the house and he hears Gwen fall. He carries Gwen to her bed.
From the medicine Gwen dreams a world where she is able to be a child and have fun. She dreams she is being led to a place with other lonely children. Her parents are sitting with her in her bed as she dreams these heavy dreams. Gwen calls out for her father after someone tells her in the dream that she will never forgive her parents if they do not stop worrying about money and society.

At one point in her dreams Gwen is lured by Death to an eternal sleep where she can always be happy and have children to play with. Gwen does not listen to Death’s call and in the morning she is fully recovered. Her parents finally learn and see that their daughter is the most important thing in their lives after almost losing her.
I really enjoyed Poor Little Rich Girl. Mary Pickford was wonderful she was completely adorable and on top of her game with her acting. You can see why audiences enjoyed her so much she had and added so much energy and life to her characters. The story was cute and sad at the same time. I felt so bad for this girl who was given everything in life yet she was so lonely and only wanted some attention and love and someone to be her friend. It was depressing to a point because Gwen was a little girl who was left alone and unloved. Yet at the same time she was nice and friendly and innocent. Poor Little Rich Girl is now one of my favorite silent films I have watched. I highly suggest seeing it.

I think I liked the film a lot more because it was filmed in Fort Lee, NJ. Mary Pickford made the film for Artcraft Pictures, one of several film studios in Fort Lee in the early nineteen-hundreds along with Universal, Fox, Metro, Biograph, IMP, and Solax. I am currently completing my college internship at the Fort Lee Museum. I am handling all of the objects pertaining to the film collection the museum owns. Not too long ago I held an actual autographed picture of Mary Pickford in my hands and it was awesome! Fort Lee has a great legacy and story with the film industry. If you are interested please visit the Fort Lee Film Commissionwebsite and come visit the Fort Lee Museum which is open on Saturdays and Sundays from 12 PM to 5 PM. Right now there is an exhibit on the Barrymore family who lived in the neighboring Fort Lee town of Coytesville.

Posted by UneCinephile at 10:02 PM