“You shouldn’t have to live in the same world with a thing like me.”

The Show takes place in a small town in Hungary. A young girl from the country named Lena, has come to town with her father to sell his herd of sheep. Since she has come to the city Lena has been seeing a sideshow performer named Robin (John Gilbert). Whenever they go out Robin makes her pay for everything.
In the show Robin performs the story of Salome with an actress (Renée Adorée) he used to date who plays and is known as the title character. After the show Salome asks Robin if he is going to see Lena again that night. She is downtrodden when he says he will be. 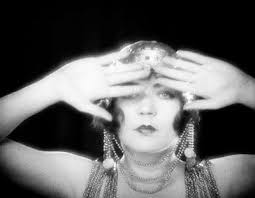 On the streets a man simply known as The Greek (Lionel Barrymore) stalks the city streets with an associate. The associate saw Lena’s father that morning sell his sheep and heard how much money he had made. The two men attack Lena’s father and kill him. When they look in his wallet he has nothing. Lena was told she had to stay in their room that night to watch the money.
In the dressing room after the show, Salome gets jealous of the other women looking at Robin. She shoves one away and tells the others to mind their own business. The Greek walks into the dressing room. He has been seeing Salome. He pulls out his knife. Robin has a sword and makes it look like he is going to use it on The Greek. Instead he does something with his shoe and walks out. Robin goes to a bar to wait for Lena. The Greek and Salome come into the bar as well. It is clear from Salome’s face that she is still in love with Robin. Even The Greek can see it and he is not too happy.

When Robin returns home Lena is waiting for him. She does not want to be alone with all the money. Robin is tempted to take the money for himself. He has it in his hand when he hears a knock on the door. Before he can even open it Salome comes charging in trying to warn Lena that Robin is only going around with her because of her money. Robin grabs Salome and almost hits her. Lena runs out of the house frightened leaving her money behind.  He throws Salome on the ground and goes to hit her with a stick he has. She stays calm and winds up talking him out of hurting her.

The Greek’s associate was standing outside Robin’s house and saw Salome come out. He tells The Greek that Robin has Lena’s money and that Salome is in on it with Robin.
The following night is the last night of the show. The Greek has beaten the man who plays the executioner in the show to take his place. Robin plays John the Baptist. The character has his head cut off. There are two different swords that are used: one is a real sword the other is a fake. Someone backstage watching the show notices the swords were not switched out and stops The Greek just in time. The Greek manages to get away. At that moment Lena shows up with a police officer who is looking for Robin for stealing the money and possibly the murder of the father. Salome tells Robin to go to her apartment and hide in the attic. That night The Greek has climbed the room to Salome’s room and sees Robin has brought the money to the attic.
Salome keeps letting a blind neighbor come into her room so she can read his letters to him. He is excited about his letters that are from his son. She reads the latest one that says the son is now a captain in the navy. Robin cannot understand why she lets the old man come in and why she has to read to him. She confesses that she is the one who writes the letters to the man because his son is going to be hanged the following morning. The only thing keeping the man alive is receiving the letters and hoping his son will be home soon. Salome told the man that he will know his son will be home when he hears the bands playing outside. The following day there is a parade with bands playing. The man gets excited and comes racing to Salome’s room wanting to see his son. The man brings Robin into his room to speak to him alone. The man says he is proud and happy for the son to be home. At the moment the real son is hanged the man dies. When Robin walks into Salome’s room she is on her knees praying to a crucifix. A police officer from the prison comes to her door telling Salome that her brother has officially been hanged that morning and that if her father wants he can come and pick up the brother’s belongings. Robin is so upset for everything he has put Salome through and for her father dying at the same time her brother did. He kisses her and then falls to the ground hugging her legs. Salome sits down and holds Robin in her arms. Robin wants to give the money to please her.

In the meantime, The Greek has gotten into Salome’s attic and taken the money. When Robin gets up into the attic he notices the money has gone. The police are at the door looking for Robin now. In the attic a deadly lizard from one of the shows has somehow gotten in there. Robin comes face to face with The Greek when the lizard scares both of them. The two men fight and are broken apart when the lizard jumps up to attack them. One of the police officers sees the lizard and shoots it. The Greek comes down holding the side of his neck from where the lizard got him. Robin comes down after. He gives the money to the one officer and tells them he is ready to go to the prison.
The show of Salome is again performed.  Robin is back in his role as John the Baptist after being released for having given the money back.
John Gilbert and Renée Adorée were wonderful together. I love them as a pair as so much. Gilbert may best be known for his pairing with Garbo but he did not look half as good with the “Divine One” as he did with Adorée. Adorée looked like a normal, real life woman. Of the films I have seen her in she is completely believable as her characters I never see her as just an actress. In his pairings with Adorée, Gilbert also becomes his character and not just an actor as he is with Garbo. I just like the way Gilbert and Adorée look together. Out of all the Hollywood pairs I like they look the most realistic and believable. In The Show you can believe that Robin has some good in him otherwise Salome would not have loved him so much. I have to say out of all the John Gilbert films I have seen so far this was definitely his best acted. There was no hamminess or over emoting he was just perfect. 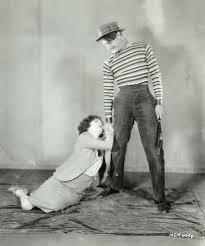 The Show is now one of my favorite silent films and it has a lot to do with John Gilbert and Renée Adorée. The story was not too bad. I liked the twist with the neighbor being her father and her brother being the one in jail. The whole thing with the killer lizard was a cheesy but that could be forgiven since the rest of the film is good. The Show is available to view in full on Youtube and I highly suggest seeing it.
Posted by UneCinephile at 11:28 PM