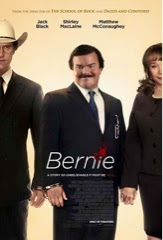 “They're making it out worse than it really is. He only shot her four times, not five.”

Whenever there is a story on the news about a murder we all want the murderer to be caught and brought to justice. Even on the millions of crime shows the basic cable channels churn out each year we want the bad guy to be caught otherwise we are not satisfied. With the movie Bernie you actually want the murderer to get away with his crime and you sympathize with him killing the person.
Bernie Tiede (Jack Black) is an undertaker. He moves to a small Texas town called Carthage. Everyone in the town immediately loves him. Bernie is nice, considerate, thoughtful, and caring to the families who have lost a loved one. He even goes a few extra miles such as checking up on the families after the funeral and offering his services to sing in church.
One lady Bernie becomes close with is Marjorie Nugent (Shirley MacLaine) after her husband passes away. Marjorie can be described as a control freak who took complete advantage of Bernie’s niceness and eagerness to please. She does not let Bernie have his own life his life has to revolve around hers. 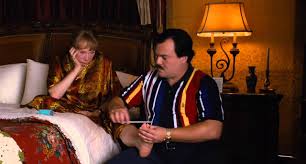 Sometime later Bernie just snaps. He cannot take Majorie anymore. In a haze he takes a small shot gun and shoots Marjorie in the back a number of times. Instead of calling the police he puts the body in the freezer in the garage. For months Bernie keeps up the appearance that Marjorie has suffered a stroke and is away at a rehabilitation place.
The body comes to light only after Marjorie’s stockbroker becomes over concerned and calls her granddaughter and the town sheriff. The entire town cannot believe what Bernie has done. Everyone takes his side since they know that Marjorie was a pain and that Bernie was such a sweet guy and that she just completely took over his life. Since the entire town is on Bernie’s side the DA Danny Buck (Matthew McConaughey) has the trial moved to another town.
Bernie is convicted for murder. Even after the conviction the town of Carthage is still behind Bernie. Some people even go and visit him in prison.
Bernie was a good movie. I liked the way the story was told through interviews, I believe, from actual Carthage locals and then through filmed sequences with the actors. The only thing that brought this movie down only slightly was Shirley MacLaine. I cannot stand her at all. I kept an open mind thinking maybe since she is older maybe she is a little bit better than when she was younger. That line of thought went quickly out the window. Jack Black is not an actor I am particularly fond of but he was really good Bernie Tiede was a different role than I am used to seeing from him. Very laid back from his usual characters.  Bernie is a dark comedy that just so happens to be true which makes the story kind of unbelievable. That right there is reason enough to see it.