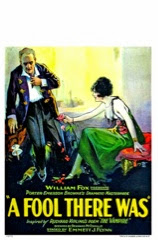 In movies today we do not really see a female character that can be classified as a “vamp”. A vamp is a woman who used her sexuality and manipulation to get what she wants. Maybe we do have them around today but those types of women cannot compare to the vamps in classic films. They may not have been as pretty or gorgeous as some actresses today but goodness gracious not only did they know how to grab their men they knew how to grab the viewer’s attention! When I hear the word “vamp” the first actress and film I think of is Myrna Loy as Ursula Georgi in the great Pre-Code Thirteen Women. Before Loy became “the perfect wife” she was known for her vamp roles and she was pretty darn good at them too. But before Loy and several other actresses in the thirties and even the twenties, there was the original vamp embodied by Theda Bara. Her first major starring role A Fool There Was launched her legend.
A diplomat named John and his family are on vacation at a resort. At the same resort is a woman simply known as The Vamp (Bara). John’s wife Kate and their daughter were out playing when the daughter’s ball rolled towards the Vamp. Kate says something to her daughter about being near the Vamp and the Vamp gets a little worked up.
The Vamp is down at the resort with her current victim. She is tired of this man she wants someone with more money and sets her new plan of attack on John. John is leaving for London for a month. Kate was supposed to go with him but her sister has become ill. He is going to London on a ship and so is the Vamp. The man the Vamp was with comes onto the ship before it leaves. As he comes on board he is warned by another man that others have been ruined by her and that two of them are still in prison. Their reunion is short lived; he kills himself because she does not want to be with him anymore. All she does is laugh and walk away. 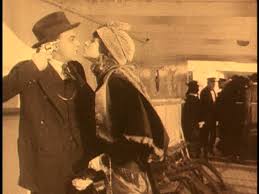 John and his family are sad to be leaving each other for what seems like such a long time.
As soon as the ship leaves the dock the Vamp makes her move on John.
Two months have gone by and John has not returned home. He is now in Italy happily in the arms of the Vamp. A couple John knows sees him and the no good woman together in Italy and refuse to stay at the hotel. Soon news of his affair spreads and his sister-in-law and friend Jack hear of it.
Kate is finally told the truth about John’s affair by her sister. The sister wants Kate to get a divorce but Jack tells her to stick with him. In the meantime, John returns home with the Vamp and sets up residence with her in a townhouse.
Eventually John turns to drinking. The Vamp goes out and parties in a hotel room with her friends leaving John all alone. Kate wants to go see him and try to convince him to come home. The Vamp hears about this and rushes back in time to kiss John in front of his wife. Kate even tries to bring their daughter to see him but the Vamp and drinking has become an incredible weakness. 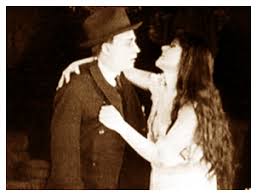 A Fool There Was is a decent silent film. The story is alright and a little dragged out. Theda Bara was by no means beautiful but just the way she looked at men and the way she carried herself made her sexy. If I were a man I would definitely had been in her clutches! A Fool There Was is worth watching because it is one of only very few films Theda Bara made that have survived.
A Fool There Was, was made at Fox Studios in Fort Lee, NJ. I am currently completing my internship at the Fort Lee Museum. The museum is not only dedicated to telling the story of the community but of its important role in the history of film. If you live in the area or live in New Jersey please come by and no matter where you live please check out the Fort Lee Film Commission’s website and the Fort Lee Museum’s website. Currently there is an exhibit on the Barrymore Family and their beginning in Coytesville, a section of Fort Lee.
Posted by UneCinephile at 10:48 PM