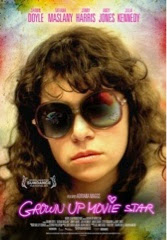 I always enjoy getting into an actor or actress that is on a TV show I am currently watching. As any good, loyal fan would do I go through their filmography and try to find as many movies or other TV shows they were in as I can. I like doing this with an actor or actress because you never know if you are going to find a movie you like or maybe you will find a movie you never thought in a million years you would ever sit through. Also you never know if you will find a movie that will inspire you in some way. I always tend to find and like the movies no one has ever heard of and they tend to be the ones I like the most. They are almost like finding a treasure. Another reason I like watching movies in an actor or actress’s filmography is because you get to see what other things they have done besides the TV show you are used to seeing them in on a weekly bases. For the past few months I have been a raging fanatic of the show Orphan Black and bow down to the ridiculous awesomeness of its star Tatiana Maslany. Since I am a huge fan of Maslany’s I of course have been going through her filmography. The most recent of her films I have watched is Grown Up Movie Star.
Ruby Fry (Maslany) was in the car when her mother finally decided to leave their small Canadian town for Los Angeles to make it as an actress. When Ruby got out of the car her mother just took off and left her and her sister with their dad. Ever since that day Ruby has been acting out in any way she possibly could. Most of it is out of curiosity, wanting to grow up quickly, and some of it is down to being a rebellious teenager.
In school Ruby meets a boy from Colorado. She is fascinated, at first, that he is from the United States and asks him if he has ever met anyone famous and much to her dismay he never has. She dreams of joining her mother in LA and becoming a famous actress. Her dad’s friend Stewart is a photographer and begins taking what he calls head shots of her. As part of her curiosity Ruby begins to think about sex. She goes about asking and even having it the wrong way.

While trying to figure herself out, Ruby has to deal with the realization that her dad is actually gay. She and her sister are already mad at their dad for once being a professional hockey player who blew his career by smuggling drugs over the border. Because of this their dad has never been able to take them to Disneyland where they have always wanted to go as a family.
Ruby’s dad has it with her after she got into some big trouble. He calls the mother to tell her that Ruby is coming to live with her. The mother meanwhile is a crack head living with another user in some hotel. Ruby is looking forward to going to LA but when her dad almost beats Stewart to a pulp trying to protect her and her sister and gets arrested Ruby realizes she loves her dad and would be lost not living with him. The acting by everyone in this movie was brilliant. Of course Tatiana Maslany is the stand out. The girl was in fact so good in this movie that she won the World Cinema Special Jury Prize for Dramatic/Breakout Performance for Grown Up Movie Star at the Sundance Film Festival in 2010. Maslany was very good. I give her all the credit in the world because I think she was supposed to thirteen in this movie when in real life in 2009 she was twenty-four. She is just beyond insanely talented for her age (at the time of this writing Maslany is twenty-eight). The rest of the cast was great. The characters were very well written and very well acted especially the part of Ruby’s grandfather whose scenes were crazy. Grown Up Movie Star is an oddly dramatic, sad, kind of tragic movie yet it has some dark humor in it. I have seen a few movies that have been made in Canada and they all seem to be dark and twisty (Orphan Black is exactly the same way with the drama and then dark comedy). I am not complaining because I have liked all the movies including this one. I am glad I found Grown Up Movie Star it is definitely one of those movies that not a lot of people have heard of that I like. It is not one of the best movies I have ever seen but it was good, it was unique. It is definitely a movie I want to own on DVD eventually.

Posted by UneCinephile at 11:15 PM