"Why, he is the prince's jester: a very dull fool; Only his gift is in devising impossible slanders."

Shakespeare is not my forte at all. In high school when I had to read Romeo and Juliet and Hamlet I wanted to die. Both of them I find to be awfully boring. I did however find a Spark Noted version of Macbeth that had the modern English version and Shakespeare’s English and actually understanding what was being said made the story ten times more interesting. The reason I wanted to read Macbeth was because a movie I really like called Scotland PA is based on that story. When I saw that famed director Joss Whedon had made a modern version of Shakespeare’s Much Ado About Nothing I thought it was going to be similar to Scotland PA. I was wrong on that point but it turned out to be an interesting version.
I am not going to go into the plot because the plot totally confused the hell outta me. If you are really interested to know look up the story on Wikipedia. I got the plot a little bit after I read what the story is about.
What made Whedon’s version of the story interesting is that it is set in modern times with everyone dressed in modern clothes and in a big house with a garden and even a small balcony yet he had the actors say the lines in Shakespeare’s English. At first I was like, really if I wanted to hear the lines spoken in the old English I would have looked up the play on Youtube. But after a while the old English mixed with the modern elements became very interesting.
The actors were not too bad. When I saw Amy Aker was in the movie I cringed a bit. I am not a fan of hers. The few things I have seen Aker in I thought she was awful. To my surprise Aker was not that bad. She had some funny moments and she was not speaking her lines and just standing there like she normally does. Alexis Denisoff I have never seen in anything before and I liked him he was good. Hearing Nathan Fillion reciting Shakespeare was probably one of the funniest things I have ever heard. He was not bad it was just weird hearing him reciting Shakespeare.


Much Ado About Nothing was very well made. It looks beautiful in black and white and actually enhances the characters and the stories. I have to say if I was an English teacher I would show this version of the play in my class. It is a great way to keep viewers interested in the story since it is set in our modern times. The modern setting makes the story more enjoyable. Joss Whedon is a very talented director and I really like how he keeps the same actors from either his shows or his other movies in all his projects. Give Much Ado About Nothing a try. 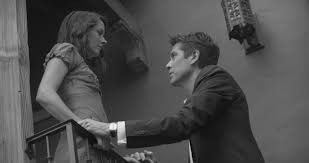 Posted by UneCinephile at 7:39 PM