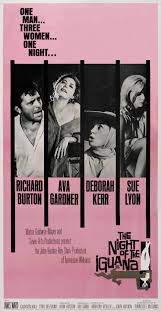 I like how hot weather creates tension in films. Usually the characters are all on edge ready to rip each other’s throats from being miserably hot frustrated. Heat always makes me nervous and anxious when I watch a film set in a hot climate because I absolutely hate the heat. In the winter you can layer clothes and take those layers off when you get warm but in the summer time you cannot walk around in public buck naked! The topical, blazing hot weather in The Night of the Iguana creates a fascinating amount of tension and makes the characters perfectly crazy and on edge.
Re. Dr. T. Lawrence Shannon (Richard Burton) was once a priest. One day during a sermon he snapped and yelled at the parishioners to leave. Now he is working as a tour guide for a company down in Mexico. Shannon’s latest group is a bunch of old ladies and one young adventurous girl named Charlotte. Charlotte has a mad, obsessive crush on Shannon. He tries to push her away but she keeps coming back to him. Her chaperone Ms. Fellowes is a control freak and goes out of her mind when Charlotte is not near her. Ms. Fellowes threatens to call Charlotte’s father who is a big judge in Texas if Shannon goes near the girl again. One night Charlotte goes into Shannon’s room. When Ms. Fellowes finds Charlotte is not her bed she has a huge blow up and goes to Shannon’s room where the girl is. 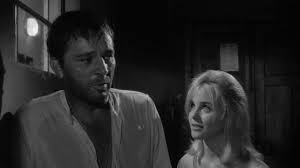 Ms. Fellowes sends a telegram to Charlotte’s father and has his reply sent to the new hotel they are going to. Shannon takes over driving the bus. Instead of going to the nice air conditioned hotel where the telegram will be sent he takes the ladies to the hotel of an old friend. The man who used to run the hotel has died and his wife Maxine Faulk (Ava Gardner) has taken over. Maxine obliges Shannon and lets him and his group stay even though the hotel is usually closed in August. 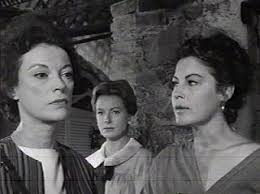 After everyone has settled in, a woman named Hannah (Deborah Kerr) and her grandfather come walking up the steep driveway. Hannah’s grandfather is ninety-seven years old and they have walked and hitched their way all over Mexico. She explains that he recites poetry and she paints and that is how they earn their money. Maxine is not happy that woman and the old man cannot pay for their stay. Hannah tells Maxine that she is at her mercy for whatever needs to be done.
Charlotte once again sneaks into Shannon’s room. He has a meltdown, his nerves are completely shot. She talks insanely and obsessively about how she wants to run away with him and get married. After their blow up Charlotte runs down to the beach and gets drunk. The bus driver is a young man. He finds Charlotte and tries to fight some locals to get them to leave her alone. Charlotte drunkenly falls in love with the bus driver and no longer has feelings for Shannon.
Shannon gets fired from the tour company. The bus driver and Charlotte manage to get the piece of the engine from the bus from Shannon that he had removed. When the ladies leave Shannon tells Hannah that he is going on a long swim to China, meaning he plans on killing himself by swimming until he is exhausted. Maxine’s men manage to get to Shannon and bring him to land before anything serious happens. They tie him to a hammock. He is terribly mean to Maxine about how she had wanted to sleep with other men besides her husband when they were married and knows about her trips down to the beach at night. She runs away down to the beach. Shannon and Hannah are left alone to talk. She tells him that once she had to fight off her own demon and did it through sheer determination and will power.
Maxine comes back from the beach. Hannah has cut Shannon loose from the hammock. The grandfather comes out and proclaims he has finished his poem he had been working on for twenty-years. He has Hannah write it down. When he is done the old man dies in wheelchair. 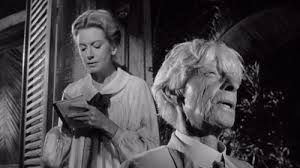 Since her grandfather is now dead Hannah has no need to be in Mexico anymore and has no more need to travel. Shannon wants to go with her but she tells him that it would be a bad idea for them to travel together. Maxine wants to leave the hotel. She tells Shannon and Hannah she is willing to give them a part in the hotel if they run it for her. Hannah still wants to leave and does. Shannon tells Maxine that he is staying with her.
I loved Ava Gardner, Richard Burton, and Deborah Kerr in this film. Ava Gardner was wonderful from the moment she came on the screen. She put on this great southern accent and had the best bad ass attitude. She spoke what is now one of my all time favorite lines from a film: Ms. Fellowes is pissed off that Shannon had Maxine cancel the call she had put into Texas. She calls Maxine his paramour and Maxine replies “Miss Fellowes, honey, if paramour means what I think it does you're gambling with your front teeth.” Just the way Gardner said that was perfection. She had an attitude but it was not a full on attitude. You can see the annoyance Maxine had for this woman boiling under the surface. Gardner, forty-six and a lot hard partying and living showing on her face and body, was still stunningly gorgeous. I have seen a lot of her films and her performance here is one of her best. Tennessee Williams, who wrote the play, said that Gardner’s portrayal of Maxine was exactly how he had envisioned the character. 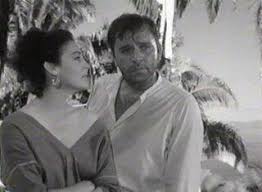 Deborah Kerr was good. Usually she plays a polite English lady in dramas and here her character was a bit flighty and scattered. I enjoyed seeing a lighter side to her. Fun fact: Kerr and Gardner starred together in The Hucksters in 1947. Gardner had just made The Killers which was a huge success for her so MGM stuck her in a film with Clark Gable. The Hucksters, I believe, was Kerr’s first leading role in America. Kerr’s and Gardner’s scenes together were awesome. Their scenes were the tough, jealous woman and the sweet, innocent woman who just wanted to help out a bit. They were also a bit comical.
Richard Burton for once did not drive me up a wall in a film. Of course he overacted and hammed up some of his scenes but for the most part he kept the character pretty under control. I liked all his scenes with Ava Gardner they looked good together.
John Huston is such a great director. He worked with Ava Gardner before and the two of them got along very well. He always got fantastic performances from her. His close ups of the characters got you into their tensions and anxieties.
The Night of the Iguana is a very good film. The direction and acting were brilliant. The story was alright and I think if there had been lesser actors playing the characters and a lesser director the story and the characters could have been too overwhelming. The Night of the Iguana is definitely worth watching especially for Ava Gardner’s performance 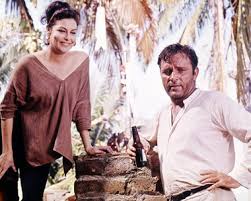 Posted by UneCinephile at 11:45 PM