“Tell me you will always be Rosa Alvaro.”

We all have fantasies of the different people we would like to be and the types of people we would like to know. I have always been into TV shows, movies, and music so my fantasies always consist of me being in the movie industry and singing into my hair brush lip sync belting out Kelly Clarkson songs. At twenty-eight my new fantasies consist of finding a full time job, getting a car, being able to down my student loans and credit card, and being a somewhat popular YouTuber who gets invited to conventions and to be a guest on Grace Helbig’s podcast Not Too Deep. I still have my fantasies about being in the movie industry somehow but now it is through the digital space and not so much through the traditional means.
My fantasies of music and movies when I was younger were never stronger than when I worked retail. For a few years I was miserable in retail jobs. I would escape into my mind and think of all my favorite movies and TV shows and characters and songs. I would dream of being any place but at my lousy job where the managers and other employees and customers walked all over me. I would just dream of being anyone else but me. I wanted to be Jennifer Garner as the kick ass, drop dead gorgeous, confident spy Sydney Bristow from her show Alias. I wanted to be Veronica Mars with the sharp tongue and quick wit. In short, I wanted to be the tough female characters I admired in the movies and on TV who were high above working in retail.
My rambling about what did (and still kind of does) go on in my head does have a point to this week’s silent film- What Happened to Rosa?- I will be reviewing.
Mayme Ladd (Mable Normand) works in the stock room of a busy department store. In the back she has her feet kicked up reading a magazine. Mayme right out of her daydream when the manager comes in looking for her to work on the floor. At the counter, Mayme looks miserable like she does not want to be there at all. It is obvious that she is physically there but mentally she is far off in a fantasy world. Interrupting her fantasies is a handsome young doctor who wants to order some stockings for his sister named Dr. Maynard Drew. Their encounter is awkward and it leaves a lasting impression on Mayme. Next, a woman named Madame Yvette O’Donnell comes up to counter Mayme is working. The woman claims to be a clairvoyant descended from Egyptians and wants Mayme to come and see her. 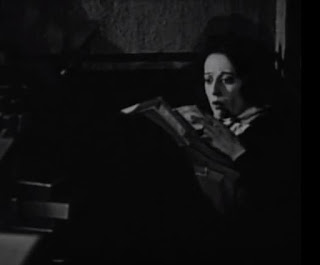 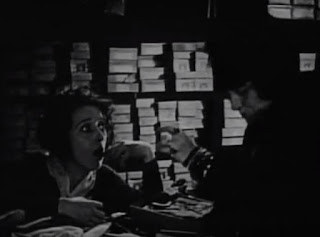 Mayme goes to see Madame Yvette. The clairvoyant claims that she has summoned the spirit of a Spanish woman named Rosa Alvarez to enter Mayme’s body to make the stockroom worker more beautiful and desirable. It is not long before Mayme begins to believe Madame Yvette’s yarn of the spirit of Rosa Alvarez in her body. Mayme’s mother used to be a dancer and she still has her Spanish dancer’s costume from one of her shows. She puts it on and she immediately becomes her new persona Rosa Alvarez. The first thing she fantasies while being Rosa is capturing the love, admiration, and attention of Dr. Maynard Drew. 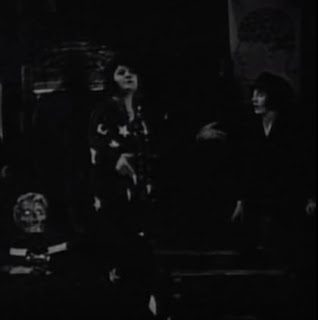 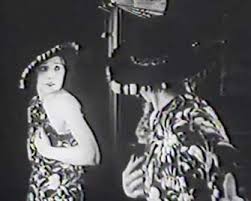 For days and weeks Mayme is obsessed with going around her apartment as Rosa. Her roommate Gwen is driven mad by Mayme’s Spanish episodes. To get Mayme out of the apartment and doing something somewhat normal, Gwen takes Mayme to a party on a yacht. The party is a costume party so of course Mayme goes dressed up as Rosa. Also at the party is Maynard and he locks eyes with Rosa. He is soon unable to get enough of this exotic woman. Gwen is frustrated with her friend and lets Mayme’s boss, who is also at the party, know that Rosa is really Mayme and she is behaving deplorably. In order to avoid any real trouble and being found out by Maynard, Mayme jumps ship and swims to shore. Maynard jumps after her but he cannot find her.
Maynard cannot think of anything or anyone but Rosa. He has detectives scour the city for her but they only turn up her clothes which they give to him. Mayme cleverly puts on an act to get back her costume and to be with Maynard that is quite silly and quite smart.


What Happened to Rosa? is a really funny silent film. I believe I have seen Mabel Normand in a film before this but I cannot for the life of me remember. I loved Normand in this film I can see why she was a popular comedic actress. I, of course, related to Mayme daydreaming away in the stockroom and out on the department floor. There were quite a number of times I remember seeing a really handsome guy come in and being enamored by them (I actually wound up dating two customers at my one retail job [at different times], whoops!). I liked the confidence Mayme gained when she was told she had the spirit of a beautiful Spanish dancer in her. There is nothing like a little confidence boost to brighten your spirits and how you perceive yourself. I definitely recommend seeing What Happened to Rosa? it was fun from start to finish. What Happened to Rosa? is available to view in full on YouTube.

Posted by UneCinephile at 11:32 PM