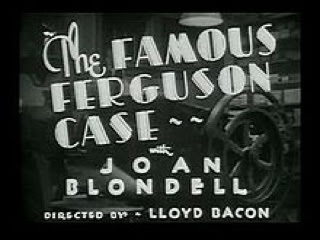 “We're just simple newspaper people who like to hear folks talk.”
“Yeah, whatever we hear just goes in one ear...”
“And comes out through the typewriter.”

It always amazes me how powerful the press is and has been since the early twentieth century. The press can be brutal in their story telling and sway opinion to their beliefs whether right or wrong. It is such a cutthroat, invasive business to me. I could never imagine myself being a reporter. No matter what the news is good or bad it always feels like gossip to me and I hate gossip and speculation. The story of the 1932 film The Famous Ferguson Case tells how reporters were desperate for a story they went out tried to investigate the case themselves to get a scoop.
Mrs. Ferguson was seen at the train station with the town banker Mr. Brooks. She drove him to the train station and he got out of the car. The next train that pulls into the station Mr. Ferguson is on it. He came back from a business trip early. He asks his wife what she was doing there and she just tells him that she was bored and wanted to see who was coming in.
That night a couple making out in a car on a hill hear what sounds like gun shots coming from the Ferguson home. The guy says the noise is just backfire from a car until they hear another shot. The police get to the house and find Mrs. Ferguson tied up in the bed and Mr. Ferguson dead on the floor from a gunshot wound. When Mrs. Ferguson is questioned she tells the police that her ring was taken by the intruders. The detectives on the case sees something weird with Mrs. Ferguson’s story so they put her in jail on suspicion of murder.
Since Mrs. Ferguson was a big banker all the reporters from New York City come up to the small town including the unfazed and embittered Mazie Dickson (Joan Blondell). Bruce is a young reporter working for the local small town paper. He has dreams of being a big reporter in the city and is bowled over when the reporters come up from there. Even Bruce’s girlfriend and colleague Toni gets caught up with all the reporters coming up.
All the reporters want a story so they try cracking the case themselves by questioning everyone and even telling the detectives to arrest. They question Mr. Brooks’s pregnant wife to such an intense extent that she collapses.
Toni starts hanging around a reporter named Bob. Mazie is hardened to all the men and their ways with treating women reporters and women in general. Mazie tries to tell Toni that Bob does not mean any of the fancy things he says he will treat her to in New York City. Toni gets upset because he likes the attention. Sometime later Bruce comes up to Bob’s room. He sees a handkerchief on the floor. He thinks it is Mazie’s so he goes to give it to her. She tells him the kind of perfume that is on it and that it is not her brand. Bruce knows the name he saw it in one of Toni’s Vogue magazines at the office. 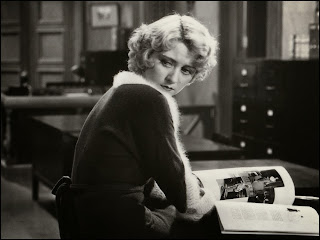 While all the big reporters are hanging around in Bob’s room they find out that Bruce has cracked the case and printed the story. Bruce had called jewelry stores all over the area with descriptions for Mrs. Ferguson’s rings and the police found the real murderer. They also get the news that because of the shock they gave Mrs. Brooks she died during childbirth.
The reporters wind up wrecking the town with their false stories and awful ways of getting their stories.
The Famous Ferguson Case was alright it was not terrible but it was not that great. What made it a bit better was the fact that it is a Pre-Code so they got away with the story of Toni messing around with Bob. It kind of drove me nuts with how pushy the reporters but that is the way reporters were back then. I watched The Famous Ferguson Case because Joan Blondell has top billing. Unfortunately, that top billing means nothing because she is not really in the film too much. Of course she is wonderful with her tough attitude. When is Joan Blondell never not wonderful with her tough attitude? The Famous Ferguson case is worth watching if you like Pre-Codes and Joan Blondell.
Posted by UneCinephile at 11:42 PM