I long to travel the world and have experiences I could only dream about. I am a curious person who loves history and learning about different cultures. I would love to reminisce in my old age about the places I have been and the people I have met and the fun things I did on my travels. I want a full life, well lived life kind of like the main character in The 100 Year Old Man Who Climbed Out the Window and Disappeared.
Allan Karlsson is one hundred years old. He lives in a nursing home. His life has been filled living one adventure to the next rather by accident most of the time. Allan does not want to be in the nursing home for his birthday so he climbs out the window of his room and heads to a bus station. Since Allan is not totally in right mind he gets confused along the way. At the station is a young man who looks like he is up to absolutely no good. The guy wants to go to the bathroom but his suitcase is too big to take into the small bathroom with him. He has Allan hold it for him. Unfortunately for the guy Allan walks out of the station onto a bus without even realizing he has the suitcase. 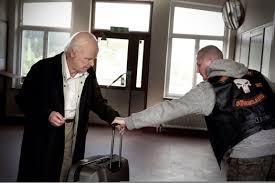 Allan walks up to the house of an older man named Julius. Julius feeds Allan and they drink for a little while. As they are eating and drinking Allan regales Julius with some stories from his life such as the fact that he liked to blow things up from the time he was very young and that his father was arrested in Russia for endorsing contraception. The guy from the train station shows up looking for the suitcase. Julius winds up knocking the guy out and he and Allan look in the suitcase. The suitcase is full of thousands of dollars. Julius had placed the guy in his freezer but forgot to turn the cold air off and the guy winds up freezing to death. 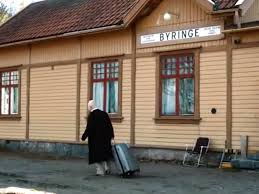 After this incident Allan, Julius, and others they pick up along the way are brought into a big adventure of running away from drug dealers and almost being killed by them. Throughout the present story, stories and adventures from Allan’s past are woven and you can see why he did not want to celebrate his one hundredth birthday in a stuffy old nursing home.

The 100 Year-Old Man Who Climbed Out the Window and Disappeared was a good movie. The length was a little too long for me and there were parts that definitely dragged but for the most part it was enjoyable. The story reminded me of Big Fish and Amelie in certain ways. All three movies tell the stories of people who led interesting, adventure filled lives in so many ways, real or imagined. I would love to be like Allan who had this insanely long adventurous life and was ready for more at one hundred. Besides the length and the fact that it flip flops between Swedish and English which to me interrupts the flow and storytelling a bit, The 100 Year-Old Man Who Climbed Out the Window and Disappeared is a movie a recommend seeing if you can find it.

If you're interested I made a video for this movie over on my YouTube channel which was a viewer request. If you guys have any suggestions of what I should watch for my channel (it can be any kind of movie new or old) please let me know either through my email or twitter which are listed on the sidebar.
Posted by UneCinephile at 9:50 PM