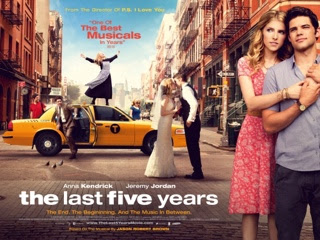 Let me start off this review that I like musicals. Some of my favorite movies of all time are musicals. I have absolutely nothing against the genre. It is very rare that I watch a musical and I do not like it. The Last Five Years was one of those rare musicals that I did not wind up particularly liking.
The Last Five Years is the story of Cathy Hiatt (Anna Kendrick) and Jaime Wellerstein (Jeremy Jordan). The story is told in a very different way. It is all singing with very little dialogue through each one of their perspectives of the relation but from Cathy’s perspective it is told in reverse and from Jaime’s it is told chronologically. Cathy’s story begins the movie when she comes home to find a note from Jaime that he has left. Jaime’s story is told from when they first started seeing each other.
Jaime is a writer who gets a novel published and becomes a pretty big success. Cathy is a struggling actress who takes acting jobs out in Ohio for a summer stock company. Their relationship starts off nice and bubbly like all relationships and then later on comes temptation and a little resentment and jealousy.
I am not going to go much more into detail because there is a lot of stuff that happens and I do not want to give too much else away.
The Last Five Years was alright. I really do not like musicals where it is all singing and no dialogue. I guess I am used to the usual musicals where everyone just busts out into song after talking. The way the story was told was very different for a musical and I liked that a lot. I would like to see how that played out on stage. Anna Kendrick is brilliant. The girl is super ridiculously talented. Jeremy Jordan was good. I remember when I first saw him on the second season of Smash and I liked him. I do not plan on watching The Last Five Years again but even though I was not too thrilled with it I will say it is worth seeing at least once. 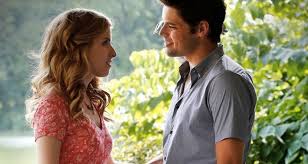 Posted by UneCinephile at 11:09 PM