For AFI’s top 25 greatest actors I do not have that much of an issue with the chosen actors. My only issue is the ordering and James Dean being on the list.
The Top 25 Greatest Actors as chosen and seen on AFI’s website:
1. Humphrey Bogart
2. Cary Grant
3. James Stewart
4. Marlon Brando
5. Fred Astaire
6. Henry Fonda
7. Clark Gable
8. James Cagney
9. Spencer Tracy
10. Charlie Chaplin
11. Gary Cooper
12. Gregory Peck
13. John Wayne
14. Laurence Olivier
15. Gene Kelly
16. Orson Welles
17. Kirk Douglas
18. James Dean
19. Burt Lancaster
20. The Marx Brothers
21. Buster Keaton
22. Sidney Poitier
23. Robert Mitchum
24. Edward G. Robinson
25. William Holden
Issue number one is the ordering. Really, Fred Astaire is at number five above Henry Fonda, Charlie Chaplin, James Cagney, Spencer Tracy, and Gable? Astaire was the greatest dancer ever to be on film he was a genius beyond words but as far as acting he was not good by any means. His acting never stretched his acting he was always the love sick little boy chasing after the younger girls. The same actually goes for Gene Kelly he was an amazing dancer and singer but as far as acting went he needed some help. There are many actors I feel are ordered on the list because of their iconic status. With the actors I really feel that many of them were not good actors and are ordered the way they are because they are legends. Gable is a legend he was not the best actor to grace the screen he was masculine, rugged, and handsome and definitely knew how to give great smoldering looks.
Issue number two is with James Dean. I have seen the guy in a few films and I did not like his acting at all. I understand he was part of a new group of young actors and he was handsome. Dean had great appeal to his era but I cannot see it.
I could have made the list here is how I would have the actors ordered:
1.      Cary Grant (The man was so versatile. Grant could play comedy to hilarious perfect and then turn around and play some of the greatest dramatic moments in film history)
2.      Humphrey Bogart (To me he just played the tough guy over and over. Catching Bogart in a film when he is not a tough guy his true acting ability comes through)
3.      Laurence Olivier
4.      Charlie Chaplin (Genius in every sense of the word. Chaplin’s films which he wrote, directed, produced, and starred in are so touching and still have people laughing)
5.      Henry Fonda
6.      James Cagney
7.      William Powell (An utter gentleman which will never be seen again. Powell had a great wit and ability to comedy and drama with a soft believable touch)
8.      Gary Cooper (One of the most handsome men ever to have graced Hollywood and also one of the most talented)
9.      Gregory Peck (Same thing I said about Gary Cooper goes for Peck. I can listen to him talk all day I love his voice.)
10.  Spencer Tracy
11.  Orson Welles (He was twenty-four years old when he wrote, directed, starred and produced Citizen Kane. What have I have been doing wrong with my life?)
12.  William Holden
13.  Edward G. Robinson
14.  Buster Keaton
15.  James Stewart
16.  Burt Lancaster
17.  Marlon Brando
18.  Sidney Poitier
19.  Clark Gable
20.  Robert Mitchum
21.  The Marx Brothers
22.  Kirk Douglas
23.  Fred Astaire
24.  Gene Kelly
25.  John Wayne (Seriously this guy could not act for crap but it was the characters he played that made him so popular and such a legend.)
For the actors list I put them in order according to how think they are talent wise. My ranking just like the actresses can be disputed everyone has an opinion. I liked many actors but for me I guess being a woman I am not as passionate about the actors list. Cary Grant (and maybe William Powell) is the only actor I can really defend and be passionate about since I have seen a handful of his films and just really like him.
The Top 25 Greatest Actors list is not too bad. If the lists for the Top 50 Greatest American Screen Legends which comprises of both actors and actresses from the Golden Age of Hollywood could be revised they would be a lot better. Maybe the truly talented actors and actresses that did not make the cut will finally make it. 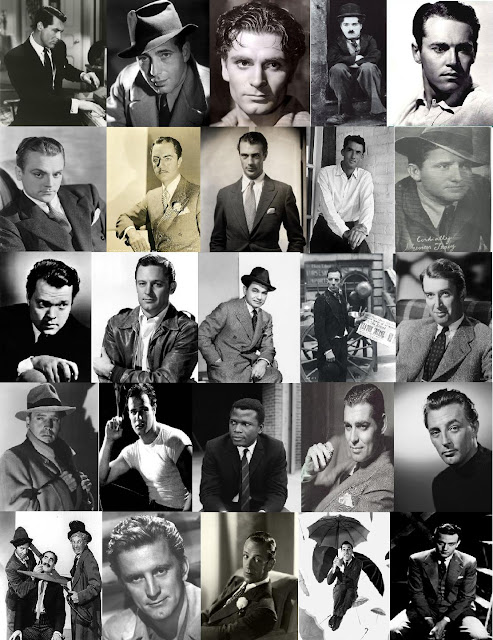 Posted by UneCinephile at 11:52 AM