“It’s the nearest thing to heaven.”
Even if you have never seen this version of Love Affair you may have definitely seen it somewhere. Ever see Sleepless in Seattle or An Affair to Remember? Then you have definitely seen Love Affair in those two forms just without Irene Dunne and Charles Boyer.
French playboy and painter Michel Marnet (Boyer) and nightclub singer turned working girl Terry McKay (Dunne) are sailing on the SS Napoli. They are sailing back to New York but not together. Terry is sailing for business and Michel is sailing back to his fiancée. They manage to run into each one night. Right away Michel is taken with Terry she is the only woman who has not thrown herself at him and he claims she is the most beautiful woman on the ship. After this meeting they pass their days together. When the ship docks at Madeira Michel takes Terry to see his grandmother. The grandmother and Terry get along very well. 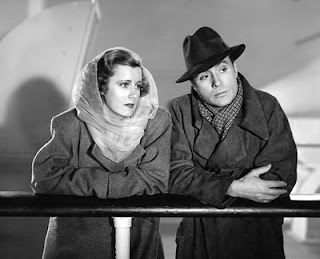 When the ship docks each of them are to go to their respective lovers. Terry comes up with the idea that if they are still in love with each other in six months they will meet at five o’clock on the one hundred and second floor of the Empire State Building. The months go by neither one can hardly wait for the date.

The day comes when Terry and Michel are to meet again. Terry cannot wait she tells everyone that she is to be married. When she goes to cross the street she is hit by a car. Michel waits and waits on the one hundred and second floor never knowing the sirens he can hear from high above are taking Terry away from him.
If you have seen the remakes you know what happens and that yes, the film has a happy ending.
Irene Dunne deserves nothing but praise. This woman could literally play any role that was given to her and just kick the pants out of it. Love Affair is the first time I have ever seen Dunne in a drama. My expectations were high for Dunne and she met my expectations… which I knew she would she never fails to be anything but amazing. She just played Terry with the perfect amount of believable dignity, pride, courage, and love. Dunne was such a classy woman. Boyer was so smooth and so pleasant to watch. I am so used to seeing him as Gregory Anton in Gaslight where he was such a greedy manipulative slime. He was absolutely wonderful as Michel. He and Dunne had beautiful, believable chemistry that did not make the story just a typical love story but a moving and gorgeous one.
Leo McCarey directed the film and wrote the story for it. He made a beautiful film. McCarey also directed the remake with Cary Grant and Deborah Kerr in 1957, An Affair to Remember.
Love Affair is an excellent film. You know that Michel and Terry will somehow end up together but that does not matter when watching the film what matter and what is so entertaining is watching Irene Dunne and Charles Boyer together. Love Affair is a film that has to be seen by everyone especially if you are a fan of Irene Dunne or you would like to see the original film which spawned so many remakes.
The film is currently available on YouTube in ten parts and on DVD.