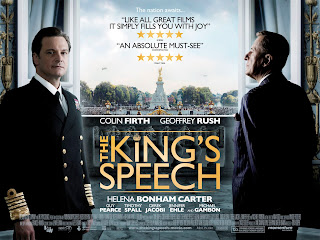 ﻿
“If I'm King, where's my power? Can I form a government? Can I levy a tax, declare a war? No! And yet I am the seat of all authority. Why? Because the nation believes that when I speak, I speak for them. But I can't speak.”
The King’s Speech is one of the better movies to have come out within the past few years. It is very well acted, directed, and written.
Assuming you know your history and you know somewhat of the history of the Royal Family you will know most of the story. If you do not: King George VI came to the throne after his brother King Edward abdicated in order to marry an American woman who was twice divorced. George’s wife is the Queen Mother Elizabeth and her daughter is Queen Elizabeth mother of Prince Charles and grandmother to Princes William and Harry.
George (or “Bertie” as he is often called) has a very huge obstacle to overcome: he as an almost debilitating stammer. He does not like to speak in public because the more he thinks about his speech the more nervous he gets the more he stammers. All his life he has been seeing speech therapists and specialists but no one has been able to help him. Elizabeth has heard from someone about a man named Lionel Logue who is a speech specialist. She goes to him as a last hope for her husband. She does not immediately tell Lionel who she and her husband are but eventually she has to tell him.
When George and Lionel first meet it is the beginning of what will become a very long and trying relationship.
The movie is very well done. The story is so good. I knew what would happen but I was nervous and kind of on an edge for George with all he had to go through and what he was trying to overcome. Colin Firth deserved to win the Academy Award for Best Actor he was so wonderful. He looks like he could have been a king or a royal back in the 1930s and 1940s. Helena Bonham Carter is always amazing even though she was not in the movie a whole lot. It was nice to see that George had strong support and love from his wife. Bonham Carter and Firth made a nice pair. Guy Pearce plays Edward and he is just an awesome actor and so good looking. Geoffrey Rush as Lionel Logue was perfect.
The King’s Speech deserved to win the Academy Awards that won. You can tell the care and quality that went into making this movie. The cast down to the supporting actors were perfect. The script was great it mixed struggle and (not so much) drama with a good amount of humor. The King’s Speech is a movie to sit through and watch especially if you like historical based stories or are just looking for a good story.
Posted by UneCinephile at 12:46 AM