“This story is about a little girl. It could be about any one of those little girls playing there. But it isn't. It's about one in particular. Her name is Gigi.”

Gigi is considered the last great musical MGM released. It is in the tradition of their greatest musicals from decades past with its extravagant sets, elaborate costumes, and excellent songs and score.
The beginning of the film is narrated by Honoré Lachille (Maurice Chevalier). He lets us know that the story will be about a young girl named Gigi (Leslie Caron). As soon as we meet Gigi we know she is not like other girls. She is a young, free spirited girl. Her grandmother and aunt try to teach her to be a proper young lady with good manners. Gigi wants nothing to do with the lessons her aunt gives but she just goes with the motions.
Honoré’s nephew Gaston (Louis Jourdan) likes to come to visit Gigi and her grandmother because they are not wealthy like him and they do not pretend to be anything different than who they are around him. Gaston is a playboy who has a new woman on his arm every week. His latest woman was caught by him with another man. The woman committed suicide from being so distraught. Gaston decides to go on holiday to the shore to get away from the gossip and prying eyes. He also decides to bring Gigi and her grandmother.
On holiday Gaston sees that Gigi is not just a cute little girl but a beautiful young woman. The two have a very good time together. The grandmother sees this so she has her sister step up her lessons with Gigi to make her more proper so Gaston will take care of her… as in make her one of his mistresses.
Gigi at first does not want to go ahead with the arrangements made for her but she comes to realize that she is in love with him and she would rather be miserable with him than without him. Gaston takes her out but he sees the cute, innocent tomboy is not the person he had fallen in love with. She is proper and acting like a grown woman much like the many others he has been with and he does not like this Gigi.
Just like in original Cinderella story the poor girl get the man who has everything.
This is an MGM musical at its best. The songs are catchy and the costumes are visually stunning. Vincente Minnelli captured a Paris of imagination. He shows us the Paris we dream about falling in love in. The songs are not just sung on a soundstage but are actually “performed” and acted throughout the actual city. My favorite scene is when Gaston and Honoré walk into a restaurant where before they entered was talk and music. Once they walk in the music and the talk stops. After a few seconds everyone sings about the gossip they have heard about each man. How perfect is that? People do that all the time, they stop what they are doing when they see someone walking in and start talking about that person.

Famed photographer Cecil Beaton designed the costumes as well as some of the scenery. He had previously designed the costumes for My Fair Lady. His costumes for the women are very elaborate and flowy. The colors of the costumes are magnificent. I can definitely tell Beaton did his homework on clothing of the late 1800s/early 1900s. I am not entirely sure what scenery Beaton created but the sets for Honoré’s room and the restaurant I loved. The sets are styled in Art Nouveau with the sweeping, delicate curves in the wood and the golden yellows.
The songs are some of the catchiest from MGM’s musicals. My favorite song is “The Parisians” simply for the fact that Gigi sings that she cannot understand how things could be love and how they are always making love. I occasionally find myself thinking of Gaston singing “It’s a Bore” it is perfect to sum him up he is just bored with doing the same things day in and day out. I guarantee that you will be singing “Thank Heaven” in your head for days. All the lyrics and music written by Alan Jay Lerner, Frederick Loewe, and Andre Previn with the orchestration by Conrad Salinger.

I am not sure how I feel about the cast. Leslie Caron was very good as Gigi she had the perfect look for a young girl who could be a tomboy but in the end look very pretty. I just wish she had had the chance to dance like she did in An American in Paris. You can see in certain scenes she has the body movements of a dancer. Louis Jourdan was ok. Like Caron he had the perfect look for his character. Maurice Chevalier I had never seen in a film before this. I was not impressed with him as an actor or singer the first time around and I still am not impressed (especially after seeing him act and sing Love Me Tonight where he did nothing for me). Casting these three leads was perfect since they were the only real French actors.
My mom- excuse me, Santa- had bought me Gigi and An American in Paris for Christmas one year. I had never even heard of these films before that time. When I asked her why she got these films for me she told me they were old films and figured that I would enjoy them. I did and do enjoy both films very much. Gigi I enjoy watching for the costumes and sets and the location shots. As far as the story goes I am not too much of a big fan of it as well as the acting but like all MGM musicals it is so much fun to watch.
I think as a girl I would love to know a rich man who was friends with me at first and enjoyed my company and then we both realized with love each other and we could be in a Paris like the film. Oh how some love stories in films bring my rarely felt/seen/known girlie side out. 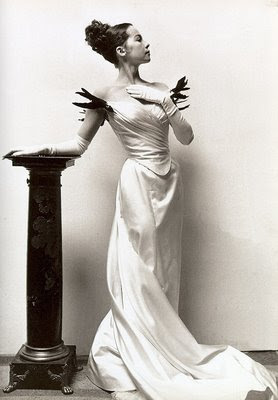 Posted by UneCinephile at 9:58 PM