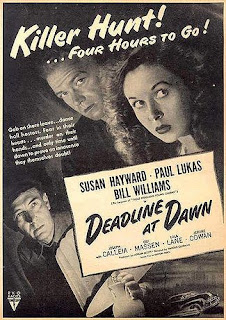 “The Divine Being made many loathsome creatures but none so low as a woman with a cold heart.”
Deadline at Dawn is a typical Noir: there is a murder, a young man is framed for the murder that he knows he did not commit but he is not sure since he blacked out, he meets a young girl down on her luck who helps him clear his name, and by the end of the film all is well and the boy and girl get together. This is the basic plot all I am leaving out are some details.
The young man is a sailor named Alex. He is on twenty-four hour leave in New York City before he has to catch the six o’clock train to Norfolk. He meets a woman named Edna is a nightclub. She pumps the sailor full of alcohol to the point where he can only remember fixing her radio, she passed out on her bed, he wanted to be paid so he took some money from her, and after that he left and the next thing he knows he’s waking up on a newspaper stand. As Alex gets up to leave a wad of cash falls out of his pocket but he cannot remember why until sometime later. For some reason Alex goes to a dancehall where with a few tokens he can dance with girls. The girl who dances with him is June Goth. He sees the dance as a date and tells June practically his whole life story. June is tired and outrageously irritable she has been dancing with a man who pretty much stalks her and the heat outside and inside is intolerable. After the dance June invites Alex back to her place for some sandwiches where he tells her about the money. She tells him to bring the money back so he does but when they get there they find Edna dead on the floor and her desk all awry. Alex thinks he might have murdered Edna because after all he cannot remember what happened when he blacked out.

With the help of June and a very nice cab driver named Gus who was concerned there was something wrong, Alex is cleared of the murder just in time to catch his six o’clock bus. The murderer is someone you would not even think of.
I was not really too thrilled with the characters except for June she seemed to be the only genuinely tough character in the whole film. Alex was too much of a baby and June pointed that out several times and that is basically everyone else treated him. He was a naïve young man who got played in part of a game by a cold hearted woman and her brother. When I watch a Noir I want to see a tough guy with the weight of the world on his shoulders who meets a feisty gal willing to help him and that is most definitely the characters in Deadline at Dawn.
As I said June was the only character who seemed to be tough throughout the whole film. Susan Hayward gets top billing and totally deserves it. Hayward was fabulous. The more I see her in films the more I adore. She was perfect as June she really had a tough, feisty edge to her and she pulled all the softer, weaker characters together. Hayward was given some great dialogue which she said wonderfully with the greatest amount of sarcasm: while at the dancehall Alex asks her what she wanted to do when she was twelve years old and she replied “Marry John Barrymore” and the other line was when Alex tells her he believes he stole the money she replies “Let us pause for station identification: you stole the money?” Another very good scene from Hayward comes when June talks to a woman who might be involved with the murder. The woman goes to grab and hit June but June fights off the woman and gets really tough with her. That was one of my favorite performances from Hayward it was a perfect bit of tough acting from her. The script I felt was alright it was too wordy. Clifford Odets who was a famous playwright during the 1930s wrote the script. One aspect of his plays that carried over in the film was his use of characters that moviegoers could relate to. There is a girl struggling to make it on her own, a young sailor who enlisted after Pearl Harbor (this was made in 1942), a cab driver who has had a hard life. I did not, however, like when he softened June by making her question love and falling in love with Alex. He was used to writing for the stage and it shows. Also the director Harold Clurman was a stage director and at times some scenes make that clear (this would be the only film he would ever direct).
The suspense was very good even if the acting was not all there. The real suspense came from the irritability of the characters from the heat. The heat was inescapable everyone was on edge and even the murder was committed because of it.
Deadline at Dawn is not one of the greatest Noir films but it does have some good character moments and I have to admit the twist at the end where we find out who the murderer is was really surprising. The plot is very typical of the genre but the characters besides June I found to be not strong enough or good enough for story. With its faults in character and dialogue Deadline at Dawn is a good film and one worth watching. 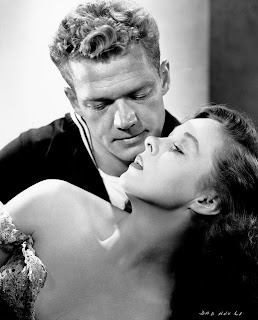 Posted by UneCinephile at 8:37 PM