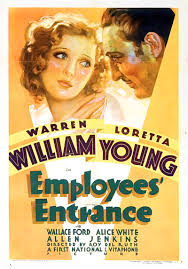 “There's no room for sympathy or softness - my code is smash or be smashed!”

If you are ever looking for a great example of what a Pre-Code film is Employees’ Entrance is one of the best. The film is also just great in general it is ruthless and gripping.
Franklin & Monroe Department Store is one of the largest department stores in the country with over 12,000 employees. The head of the department store is a ruthless man named Kurt Anderson (Warren William). He has the store and it’s board in his iron vice grip. Anderson goes to board meeting and without faltering tells the gentlemen that he wants to be the only one in charge of running the store and demands a salary increase. The board thinks he is out of his mind but they keep him because the store’s sales have been through the roof.
Anderson proves his power when a coat maker cannot meet the deadline for the store’s order for a special sale because of a labor dispute. Anderson takes whatever coats the man has made and then cancels the order. The man’s business is ruined because of the cancellation but Anderson does not care. That night after the store closes he hears someone playing the piano in the model house. He finds a young woman named Madeline (Loretta Young). She was planning to stay in the home until the morning so she could be first on the employment line. Anderson likes her, takes her out, then back to his place. Madeline becomes a model in the women’s clothing department. 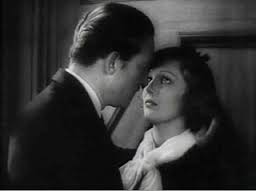 Madeline starts to see Martin West a man who works in the advertising department. He is a nice sweet guy. Anderson sees Martin be really tough with an artist over a drawn illustration for the store’s advertisement. He does not like the man’s illustration and does not accept his work. Anderson likes what he sees and moves Martin up to his assistant. Madeline gets a marriage license. At first Martin does not want to get married so soon because no one knows that they were even seeing each other and does not want Anderson to know if was married. Madeline is heartbroken and he sees it. They see a wedding party leaving a church and Martin drags Madeline into the church and they are married.

Martin begins to become bogged down by being Anderson’s assistant especially after the old head of advertising, Higgins, kills himself when Anderson fired him and refused to see him. Anderson did not even bat an eye when he heard the news about Higgins he just said good riddance. On top of everything Madeline begins to get on his back for constantly being at Anderson’s beck and call. They are at a company party when she gets upset with him for not coming home for dinner. They walk away from each other and she winds up drinking with Anderson. He tells her to go up to his room and she does. Martin meanwhile passes out during the party and wakes up in the hotel. He finds Madeline just as she is writing him a letter saying she has been a terrible wife and is leaving him when he walks in and says he is terrible for not having gone home the night before. 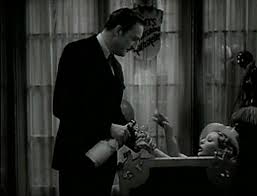 Madeline is called down to Anderson’s office. He wants to see her at his place that night. She refuses and lets slip that she and Martin are married. Anderson is furious over this and calls in another girl in the store named Polly to try to come between their marriage and luckily for Martin and Madeline she refuses. Anderson later tells Madeline that he is willing to pay her off to leave her husband. He sneakily and awfully has Martin find out that he and Madeline had spent two nights together. She gets so upset she poisons herself but thankfully she lives. Martin refuses to work in the store anymore.
Anderson finds out that he is about to be fired from his job. He has only one ally on the board who also happens to have the forty vote proxy of one of the owners. The ally gets the proxy vote and the bad guy Anderson still has his job.
Warren William was stereotyped into a bad guy but he was so good that audiences never got tired of him playing the same character over and over. He was a great charming bad guy because he was oddly handsome. Loretta Young was fantastic. She was twenty years old at the time she made this and looked beautiful (and her acting was much better than it was in TheSquall). She was so cute when her character was introduced in the model home, she pretended she owned the house and was showing Anderson around her home. Young was hysterical when she had to play drunk because I have never seen her do a scene like that! Young played her character with a great depth that was probably not meant to be but she made the character brilliant and really stand out.

There are so many aspects of this film that make it a perfect example of a Pre-Code film. Anderson has one of his girls Polly who he apparently has been with before seduce and distract one of the board members. When she comes into his office he says he is not used to seeing her with her clothes on. Anderson sleeps with Madeline twice the second time when she is married. Madeline is not shamed but forgiven by her husband. In the end Anderson who is the ruthless bad guy does not get punished at the end but rewarded.
Employees’ Entrance is such a good film I really do not have any complaints about it. Everything about the film is fantastic. Employees’ Entrance is not available on DVD or Youtube I caught the film on TCM so if the channel plays it again absolutely watch it especially if you are a fan of Pre-Code films.

Posted by UneCinephile at 11:59 PM