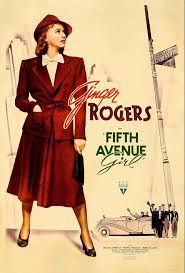 “You see, it's my birthday.”
“Birthdays are all right, but you never get over the first one.”

Fifth Avenue Girl has a different kind of plot for a comedy film from the 1930s. It had so much potential to be really funny but fell short. There was no spark, no life to it.
Tim Borden is the wealthy owner of a factory that makes pumps (pumps for what I do not know). His business is not doing well because the workers are striking and several other issues. All Borden can do is throw his hands up and go home. The day happens to be his birthday and he expects some kind of happiness and positive attention at home. Instead Borden comes home to an empty house and a blackmail letter that his wife has been seen with a young society boy. Borden throws the letter in the fire not caring. He decides to go out to the zoo that is across from his beautiful mansion.
At the zoo he meets a young unemployed girl named Mary Grey (Ginger Rogers). Since it is his birthday Borden takes Mary out to a fancy restaurant. At first Mary is worried about what everything costs but by the end of the night she is all fed and happy and having a good time with Borden. Borden’s wife is at the same restaurant with her younger man. He goes over to his wife who is furious that he is with another woman and he simply tells her he does not care what she thinks he is having a good time on his birthday.
The next morning Borden wakes up with a black eye he cannot remember getting. His wife is furious with him for being out with Mary when all the sudden Mary walks downstairs from the guest bedroom. Neither Mary nor Borden remembers how they got home. Mary does remember that Borden got into a fight with the cab driver and that is all. After breakfast Borden realizes this is the first time in a very long time that his wife and children have paid any attention to him and he likes that his wife is jealous and his children are mad at him. He comes up with the idea for Mary to stay in the house so his wife will pay attention to him more.
A doctor for the family tells the wife to be nice to Mary thinking in time she will reveal her true colors as a gold digger. Mrs. Borden thinks her husband is crazy but the doctor tells her she is the one who needs help not her husband. Borden is so happy and carefree he does not even go to work. That was also part of his plan to get his son to start running the business for him. 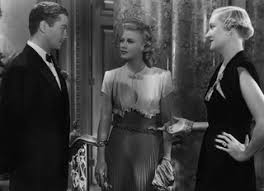 To make a long story short the Bordens become a happy family once again and Mary falls in love with Tim, Borden’s son.
Ginger Rogers in her Pre-Codes and several of her other films in the 1930s was the personification of the snarkiness. No one could better fire away a sarcastic comment or reply like she could. Ginger was given the snarky sarcastic lines in this film but she just delivered them so flat and so slow. Unfortunately I think she partly brought the film down. She is not the sole reason the film was dull was but her flat delivery of almost all her lines did not help. It seems as if Ginger just phoned in her performance it did not seem like she enjoyed making this film.
Fifth Avenue Girl had a cute story and if Ginger Rogers’s performance had not been so dull and the character of Mrs. Borden had been so annoying the film would have been enjoyable. I also found the character of Mike the driver played by James Ellison to be pointless and a waste of time. It took so much away from the main plot of the story. Fifth Avenue Girl, as one reviewer on IMDB wrote, is like My Man Godfrey with Carole Lombard and William Powell only the sex roles are reversed. Only with Fifth Avenue Girl there is no chemistry at all between Ginger Rogers and Walter Connolly or any of the characters for that matter and there was no quick paced wit being thrown around. Only watch Fifth Avenue Girl if you are a big fan of Ginger Rogers.

Posted by UneCinephile at 11:51 PM