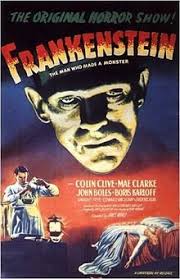 Years ago my brother was on a Universal Monster kick. I can remember clear as day my parents buying him the DVDs of Dracula, The Mummy, The Wolf Man, and Frankenstein. I had no idea why he was so interested in them especially because they were old black and white films. At the time I was not into classic films yet so I had no interest in them. Then I noticed maybe a year or two later that Anthony was putting the DVDs in a box to be sold. By that time I had just begun to like classic films so he told me to take them. Now, several years later, I am finally getting around to watching at least one of the classic horror films. I chose Frankenstein to watch first because I love Young Frankenstein by Mel Brooks and Gene Wilder, I had to see what the comedic geniuses were referencing.
I am not going to write a summary of the film out because I am sure that everyone in their life time has heard the story of Frankenstein or more accurately Frankenstein’s monster. 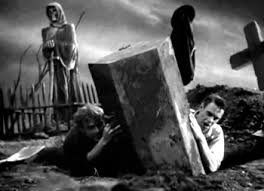 I can clearly see why this film is cited as the birth of the horror film genre. I can just picture it being so scary for movie goers in 1931. Over seventy years later the close ups of The Monster’s face are terrifying. If I was little kid watching this now I would be afraid. I read that the makeup for the Monster was all done by the makeup artist Jack P. Pierce and make no reference to Mary Shelley’s book character. Pierce created the most iconic monster makeup ever. He made the face makeup a grayish- green color so it would look pale on the black and white screen. All future references to the Monster were made to look like Pierce’s work.
The cinematography and some of the sets have a great German Expressionist look. The Expressionist look and it being in black and white greatly enhance the scariness to the film. 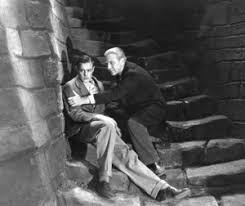 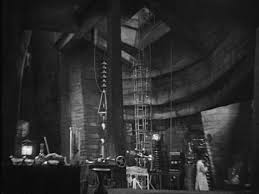 I had to laugh at several of the scenes because I kept thinking of Young Frankenstein. Young Frankenstein is one of my all time favorite movies. I put that movie on and I laugh as if it is the first time I seeing it. From the first scene I was laughing when Frankenstein told Fritz (not Igor) to get down when they are at the cemetery and he is still standing. In Mel Brooks’s version Gene Wilder tells Marty Feldman to get down and he is still standing up. If you have never seen Young Frankenstein there is clearly something wrong with you and you must go watch it right now.
Frankenstein is a classic film all film lovers of any decade or genre should see. It is one of the perfect examples of filmmaking, style, writing, casting, direction, and cinematography. Even though Frankenstein is based off of a classic work of literature it has a good story and characters that “horror” films of today lack. 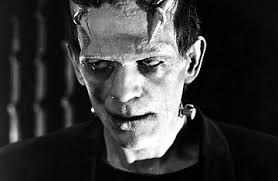