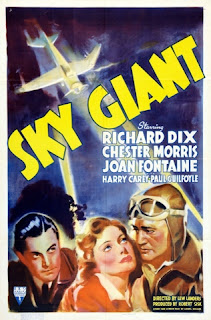 Sky Giant does not have an unfamiliar story. I feel with this if you have seen one aviation film from the thirties you have seen most of them. It takes aviation, puts in two guys who at first do not get along too well, and throws in a girl they both happen to like. Sounds like any other film not necessarily just an aviation themed film.
The film starts off with an old air force colonel named Stockton taking over an aviation school. He wants nothing but the best from his students and runs it as if they are in the military. Stockton wanted a pilot named Stag Cahill (Richard Dix) to have an office job but Cahill says there is no way he would ever want to work in an office he loves flying. As he was leaving to go to another airline company Cahill gets a letter from his commanding officer that he has to stay with Stockton for a mission.
Stockton’s on Ken (Chester Morris) signs up for the school. He does not make a good first impression on Cahill when they first meet and for the first few weeks the two men go back and forth driving each other crazy. Col. Stockton is not happy when he sees his son has applied and been accepted to for the school. Ken is reckless and irresponsible but with this Ken sets out to prove himself.
Eventually Cahill and Ken become friends and they start vying for a girl’s attention. Cahill had met Meg Lawrence (Joan Fontaine) as he was saying goodbye to some of his friends. He thought she was a guy getting into his locker before he even left and he kicked her in the behind and she fell. Since then he was always trying to get her cousin to let him meet her. Meg falls for Ken and even agrees to marry him until he refuses to give up flying and work at a desk job and they split up. Seeing this as a moment of weakness Cahill moves in and constantly tells Meg that he loves her and wants to marry her and she eventually agrees to if the mission he has to go on is his last and he agrees.

What would an aviation film be without there being a mission? Cahill, Ken, and Meg’s cousin Ferguson go on the mission where they have to map out Alaska and some other places. Their plane goes down in the snow in Alaska and Ferguson breaks his leg. And just like in most aviation films the guy who is keeping the others from reaching safety sacrifices himself.

When Cahill and Ken come back Meg runs to Ken first. Cahill can see that Meg really loves Ken. He lies telling Ken and Meg that he lied about his age on the marriage certificate so now the marriage has to annulled.

Happy ending everyone gets what they want and they walk away all best friends.
The cast was very good. Richard Dix and Chester Morris I have seen in other films but I really do not remember them. Joan Fontaine was barely in the film until the end. She was only twenty-two when she made this film. The more films I see of Fontaine’s I notice how good she was even in her early films. She is very natural in front of the camera you can believe she is her character. 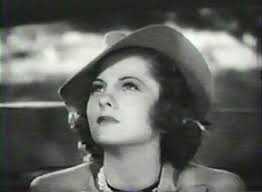 Sky Giant was alright I got bored of it pretty quickly. I am not saying it was a bad film I happy I got the chance to see it. TCM aired the film last week for Joan Fontaine’s birthday. If they ever air it again give it a try.

Posted by UneCinephile at 10:44 PM