“Things that really happen are always difficult to explain.”

When I hear the term Film Noir my mind immediately thinks of films like Laura, Black Widow, The Big Sleep, Leave Her to Heaven, The Killers, and several others. They are all dark and twisted and mysterious with a sexy femme fatale and a world weary detective. I like the Noirs from the 1940s when the genre was just getting started. I think I like them mostly because they had some fantastic stars in them with great stories. Once the film style reached the 1950s I am not too crazy about it. Yes, I know Black Widow is from the fifties but that is an exception in my book. Honestly I am not too crazy about films from the fifties unless they are musicals or Cary Grant is the star. Nightfall was released in 1957. It does not feel like a Noir. There is nothing dark or mysterious about. There is no femme fatale or world weary cop. There is nothing to really hold your attention.
A man named James Vanning (Aldo Ray) walks into a bar and is immediately confronted by a woman named Marie Gardner (Anne Bancroft). She asks him if he has five dollars to loan her since she owes money for some drinks she bought. They get to talking and eventually have some dinner and more drinks together. 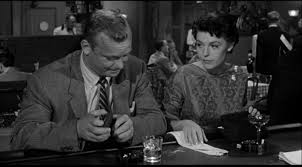 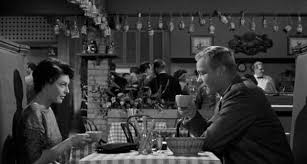 As James and Marie stand outside the restaurant they are confronted by two men. The men look at Marie and say thanks for getting James softened up and tell her to go home. The men, named John and Red, take James to some oil rigs. They ask James where he has hidden their money. James responds that he has no idea where it is he has not seen it. We are shown part of the reason why John and Red are after James- a few months previously James and his doctor friend had been camping out in Wyoming. They saw a car swerve off the road and went to help. The doctor patches up John’s arm that was hurt in the crash. John says that the two of them cannot be kept alive they have seen too much (*honestly it was just a crash there was nothing to see. Hole number one in the film*). All four men walk back to the campsite. The doctor tries to run away but Red shoots him. Red wants to make it look like James killed the doctor then killed himself. James almost gets away until he falls and hits his head. It looks like he is dead so John and Red leave. Out of the flashback, James manages to punch out his pursuers and runs to Marie’s place. 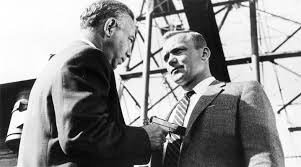 In the mean time, a insurance investigator named Ben Fraser has been following James around for three months. He was hired by the doctor’s insurance company to look for him to see if he was the actual murderer. Ben tells his wife about the case how he has been following James from city to city. He tells his wife that he thinks James is innocent and he not sure why.
At Marie’s place James tells her the rest of the story of what happened to him in Wyoming. When he came to he went to the doctor’s bag to try to fix himself up only when he opened the bag he found a large amount of cash. Just as he gets a grip on what he is seeing, John and Red are back looking for their bag. James gets away and manages to spend some time in a ranger hut. After that he cannot remember what happened to the bag he thinks he may have dropped it somewhere or left it behind. John and Red pull up outside of Marie’s place. Luckily they get out before the two men come upstairs for them.
I am sure you can somewhat figure out what happens… at least I hope you can because I am in no mood to explain the rest of the film it was so boring.
Anne Bancroft I felt was completely wasted. She was just there to be a romantic interest. At twenty-six years old Bancroft had so much talent and it just felt and looked wasted. Aldo Ray I have never even heard of or seen in a film before. He was good as the innocent everyman who is thought guilty of a crime he did not commit.

I had a feeling I was not going to be crazy about Nightfall right from the opening credits with the cheesing horribly sung theme. I have to say I was bored from the beginning. I do not even understand why Nightfall is considered a Noir maybe it has to do with the way the bad guys meet their end I do not know. Only see Nightfall if you are a fan of Anne Bancroft, completely skip it otherwise. 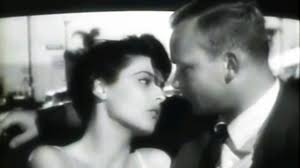 Posted by UneCinephile at 11:06 PM