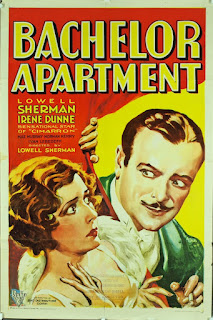 Ladies and gentlemen I have finally found an Irene Dunne Pre-Code that I actually enjoyed! I have seen several of Dunne’s Pre-Codes and early films and almost all of them have been a complete bore. I am excited to say that Bachelor Apartment is the first Dunne Pre-Code that I was able to sit through without wanting to turn off.
The film begins with a butler named Rollins cleaning up after a wild party his employer Wayne Cater (Lowell Sherman) held the night/morning before. He finds bracelets and jewels all around the apartment. As Rollins tries to clean up either the door bell or the telephone rings. Wayne wakes up not too happy at all the nose the bells are making.
On his way to the office Wayne sees a pretty young lady in the car alongside his. Wayne’s car almost collides with a truck. The young lady’s car does. Wayne immediately rushes to her side. All the lady wants is to get to the train station to get back home to San Francisco. Wayne has other plans he takes her for a drive around Central Park and then back to his house. At the house her dress gets messy. Wayne gives her one of several dresses other women have left behind. 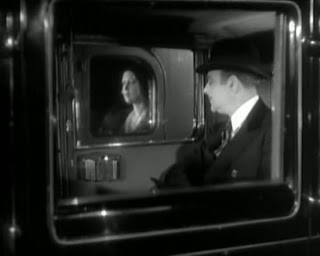 Helen Andrews (Dunne) lives with her sister Lita. Lita tells her sister that she met Wayne Carter in a store that afternoon and has invited her to his place. Helen is not very happy her sister is putting herself out for a man. Both want to marry a rich a gentleman but Helen is the only one rational enough to want a real gentleman not a slimy one. Lita just wants to marry someone with money so she will not have to dance in a chorus or live in a rundown apartment. Lita just misses a letter from the theater manager she had auditioned for that she has made it into the show. Helen runs to find Lita at Wayne’s apartment. Wayne immediately denies that Lita is there. The young lady Wayne picked up walks out of a room. Helen and Wayne find Lita with Rollins in the kitchen. Rollins was pretending to be Wayne. Wayne is enamored with Helen. He tries to ask her out to dinner but she is not having any of what he is saying.

Not too long later Helen gets a job as a stenographer in an office. She is brought to the boss’s office. The boss just so happens to be Wayne. Helen wants to leave right away she wants nothing to do with Wayne. He pleads with her saying he has been looking all over for her and reached out to every employee agency to do so. Helen eventually agrees to work for him.
Helen quickly learns her way around the office and takes control of several of Wayne’s affairs. In the employee locker room she hears some of the other women talk about her. They say who does she think she is taking over like she is the boss and has been around for years when she was just hired three weeks prior. They also say that Wayne never acted like he has been with Helen with his last secretary. One day Wayne is sick and tells Helen to come to his apartment. Almost as soon as Helen arrives Wayne gets a call from the girl from San Francisco and an old lover named Mrs. Agatha Caraway comes over. 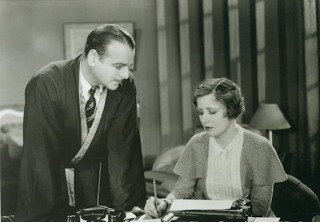 Wayne is so embarrassed about Helen hearing and seeing the other women in his life when he is truly in love with her that he stays away from the office for a week. One of the women from the floor comes into the office. She thinks Helen knows where Wayne is and tries to get a confession out of Helen. Luckily Wayne comes in and explains why he was away.
The same night Wayne comes back Agatha is waiting for him in his bed. Wayne is mortified that she is there and wants her out right away since Helen is coming over for dinner. Agatha does not leave before Helen arrives. Now Helen thinks that Wayne is still continuing his own ways and lied about really loving her. To make the situation worse Agatha’s husband comes by with the intent to kill Wayne since he thinks Wayne is sleeping with his wife. Mr. Caraway forces Wayne to open the door to his bedroom. When the door opens Helen is on the other side. Mr. Caraway feels terrible and leaves. Helen storms out of the room and out of the apartment.

When Helen gets home she gets into an argument with Lita. Lita promises she is never come back again and storms out the door. In the middle of the night Helen wakes up to find her sister has not come home. In a panic she races to Wayne’s apartment since Lita has been seeing one of his friends. Wayne’s goes to his one friend’s place but the friend has not seen Lita and the man she was with for a long time. Luckily Lita comes home unharmed and very happy. She and the guy she was with were married.

And of course to make the ending happier Wayne and Helen wind up together.
Irene Dunne as usual was excellent as usual but there was nothing amazing about her performance. What makes her performance different from her other Pre-Code performances is that her character was not tragic and dramatic. Dunne’s character was just right for her. She had great chemistry with Lowell Sherman who was also the director. Sherman did a great job directing the film. I have seen Sherman before in What Price Hollywood? and I really liked him in that. 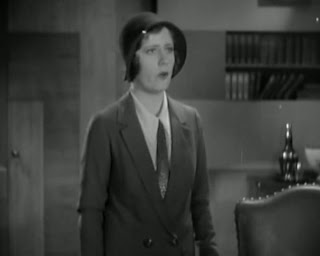 Bachelor Apartment is one of my favorite Pre-Codes I have seen. I liked the running gag at the beginning of Wayne always having women around and all the jewelry they left behind. And as I mentioned at the beginning I am so happy to have finally found an early Irene Dunne film I enjoyed since all the ones I have seen were way too dramatic and boring. Bachelor Apartment is not available on DVD (it needs to be!!) or on Youtube I had it recorded from over the summer when TCM featured Irene Dunne in their Summer Under the Stars program. Keep an eye out for TCM to air Bachelor Apartment again it is worth seeing. 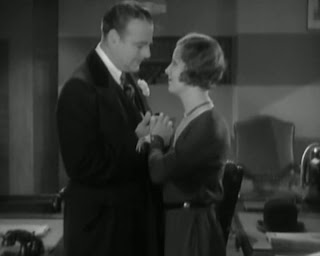 Posted by UneCinephile at 5:36 PM